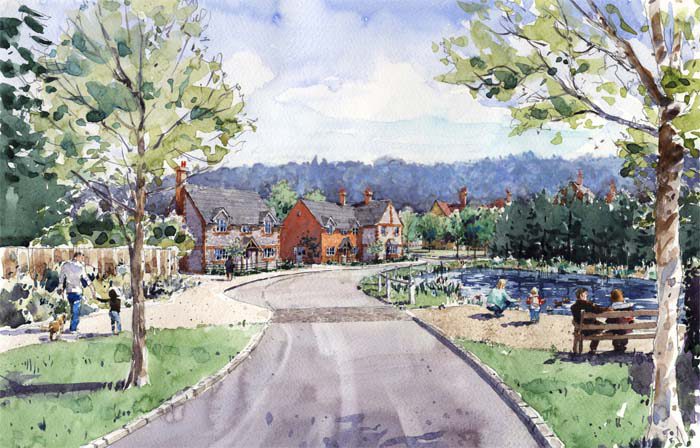 A full planning application has now been submitted by Thames Properties to build 72 homes on land west of the Fair Mile off Badgemore Farm Track.  The site backs on to Luker Avenue and Crisp Road.

The site was included in the Neighbourhood Plan for 60 homes.  Over the course of the pre-application discussions with the Council, an additional parcel of land, Field Cottage is now included in the site area along with piece of land to the rear of Crisp Road.  Thames Properties say, “This has provided a more logically shaped site and allowed the scheme to be redesigned with more units including 29 affordable homes.”  The company originally wanted to build 82 properties but reduced the number after a public consultation last year.

At a Town Council Planning meeting on 20 August, a large number of worried residents aired their views on traffic congestion, the height of the 3-storey flats and the loss of wildlife habitats.

This week Thames Properties responded to the issues raised.  In a report presented to the Town Council Planning Committee they said, “The proposal includes two apartment buildings to the north west corner of the site.  Each building will comprise of four apartments over two levels.  Whilst there is an additional level for car parking, this is a basement set below the ground level and concealed on all four sides by banks of vegetation therefore the apartment buildings will appear as two storeys to match the housing across the rest of the site.”

The report included the proposed ecological enhancements which said, “The site has been designed with a focus on connectivity, tree lines, hedgerows and woodland/scrub habitats to ensure sufficient carrying capacity for the dormouse population, post development.  These measures will also ensure that other species recorded on site, such as deer, foxes and bats have sufficient habitat to travel around the site.  The reptile population will be translocated off-site to a receptor area, the enhancement and management of which will be controlled by a legal agreement.”

Access to the site is across the bridleway used by many other properties.  Henley Town Council are currently in negotiations with the company to agree a percentage of the sale price of the development or of the land if sold off by Thames Properties.

Karen Hope whose house backs on the development posted on Facebook, “I am furious with the underhanded, misinformed way this proposal has been subject to. It was originally outside the top ten initial proposals of sites agreed by the people who voted on the neighbourhood plan, and moved up to fall inside the top ten. The environmental report mentions the trees they will save, a few species of animals which will be relocated, well think about it, who financed those reports. At night we see many bats, not just a few, hear barn owls as they hunt, foxes and their Cubs are seen and heard all year round, rare species of birds, woodland birds. I have slow worms breeding in my garden and cannot believe they are not in the field. I have found glow worms near my house. Not to mention the deer. I have lived in this area since 1969 and this piece of wilderness has evolved it’s own eco system, what a shame to loose such an important element of Henley life. We will lose an old farmhouse, haven’t we lost enough of Henley’s history, with the demolition of old landmark buildings, the cherry orchard etc.”

The HTC Planning committee this week voted 5-3 in favour of the proposal and set out some conditions on wildlife and vision at the entrance.  South Oxfordshire District Council Planning Committee will review and make the final decision on the application.