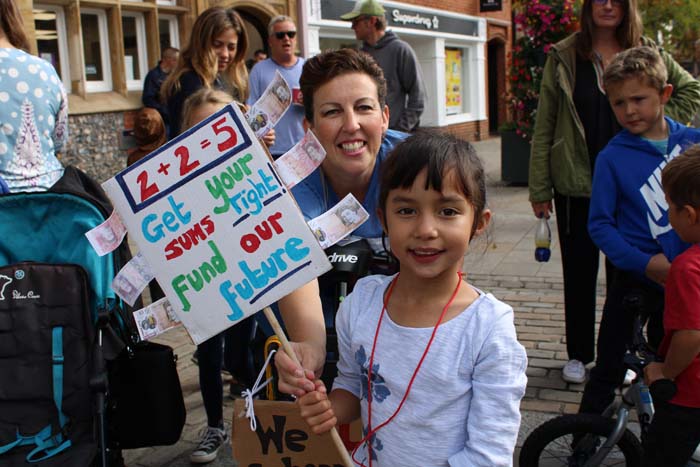 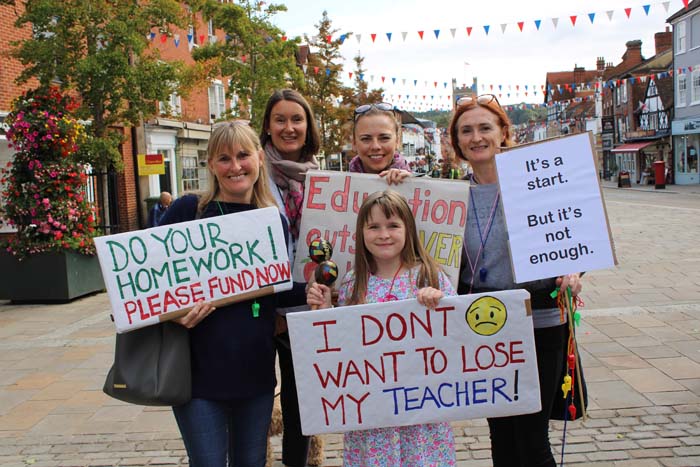 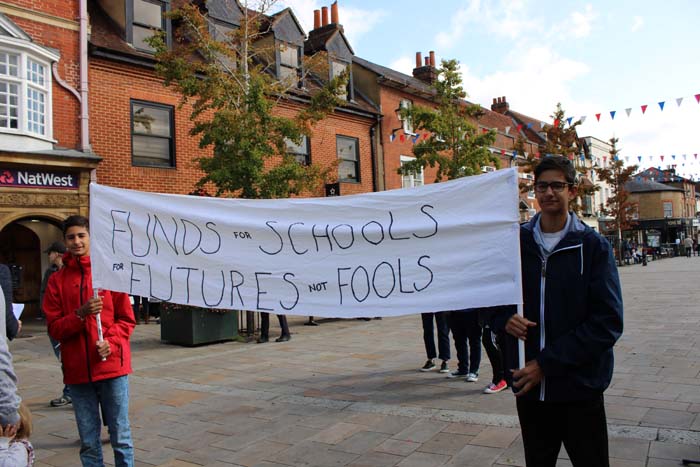 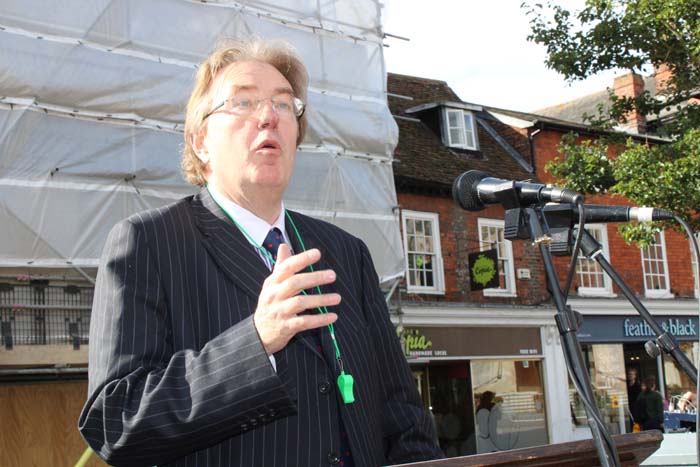 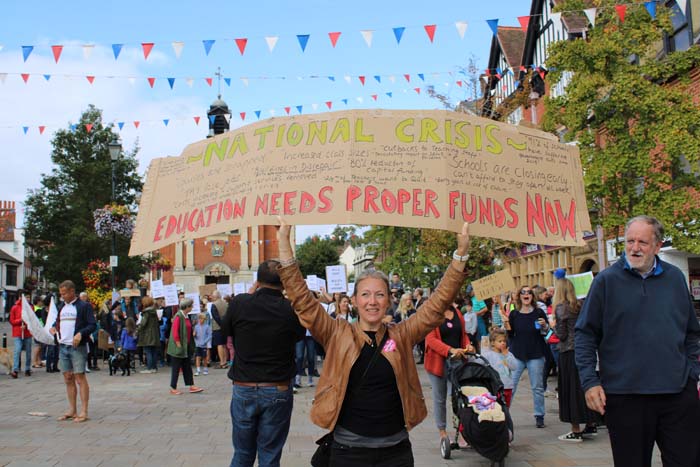 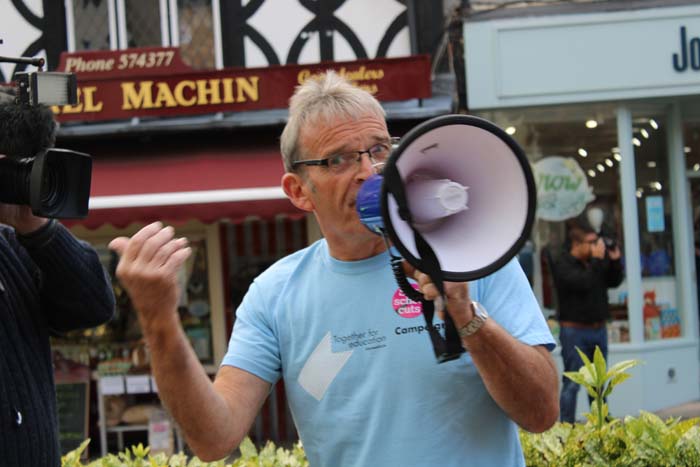 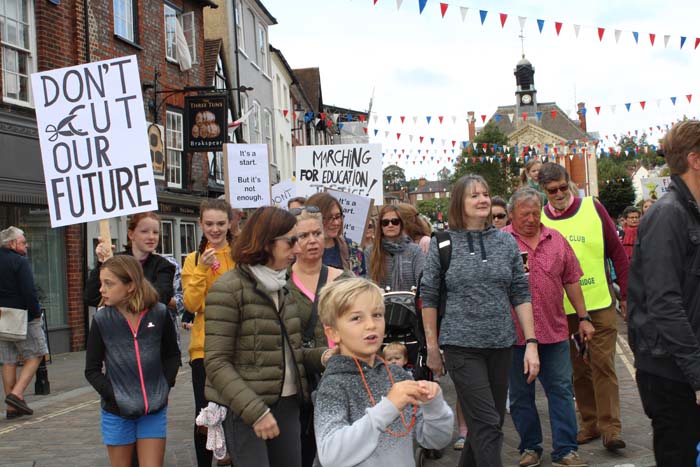 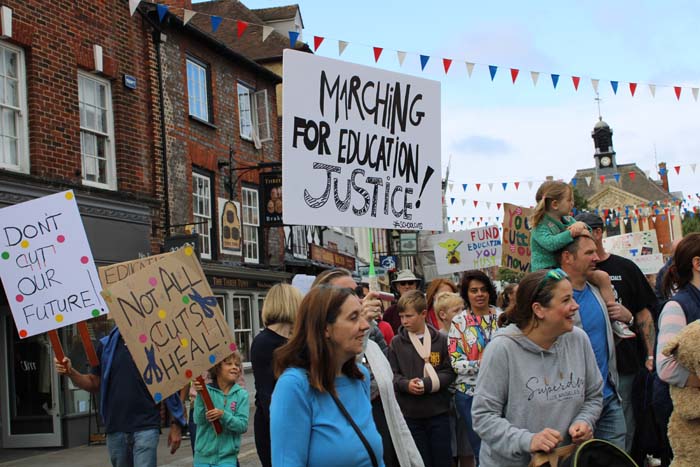 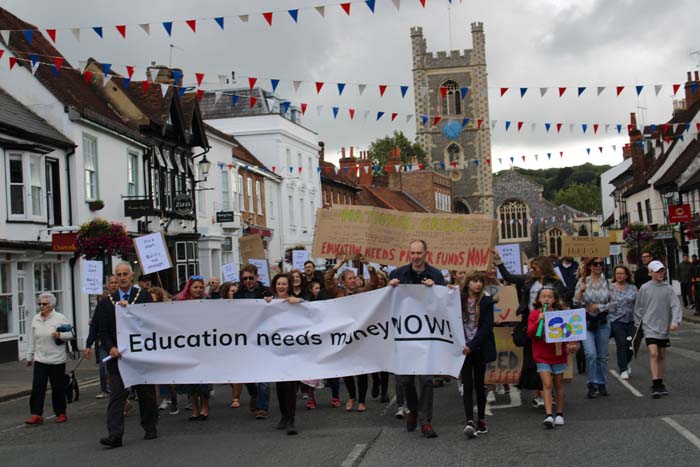 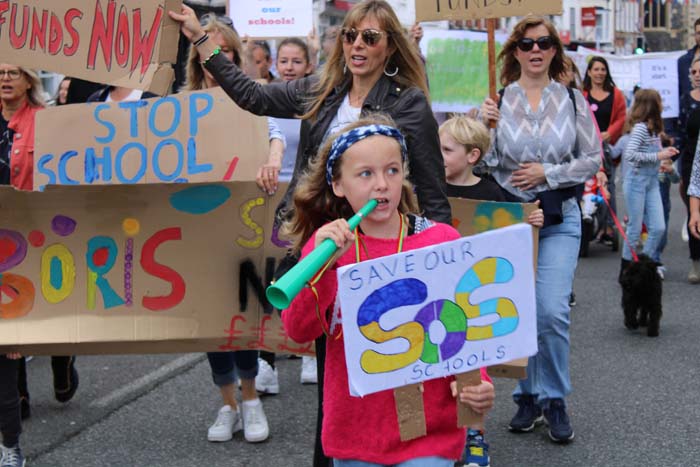 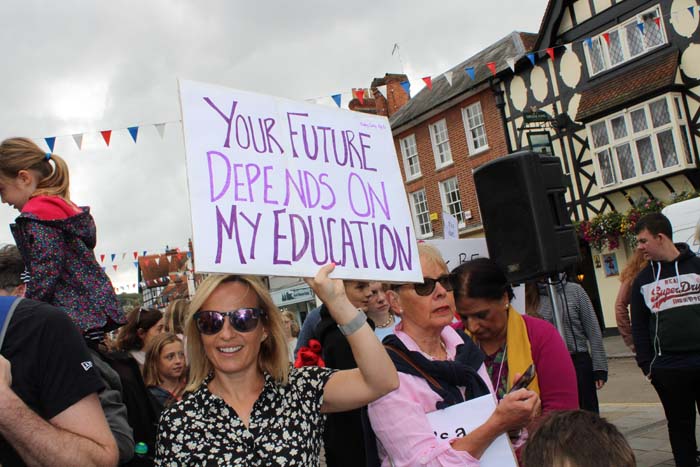 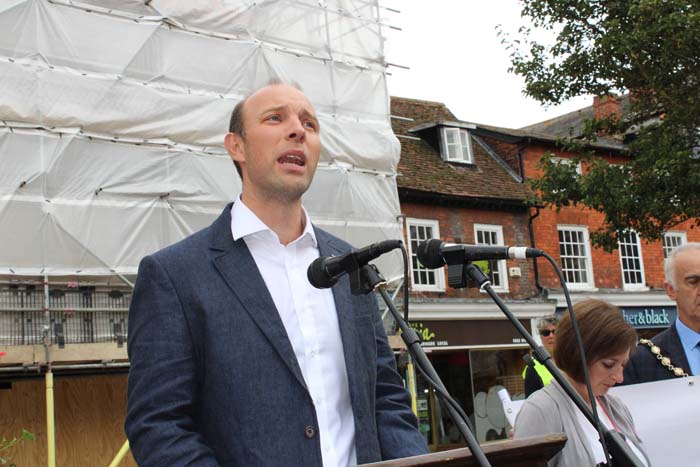 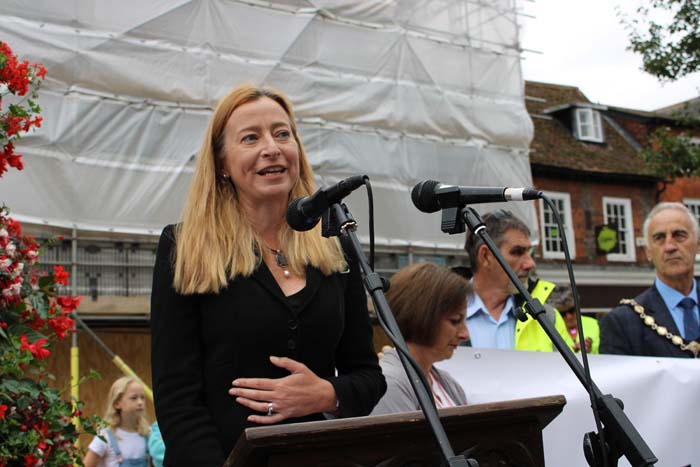 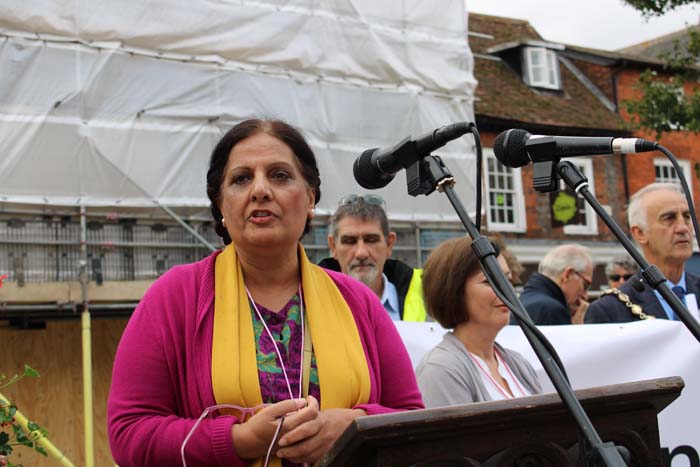 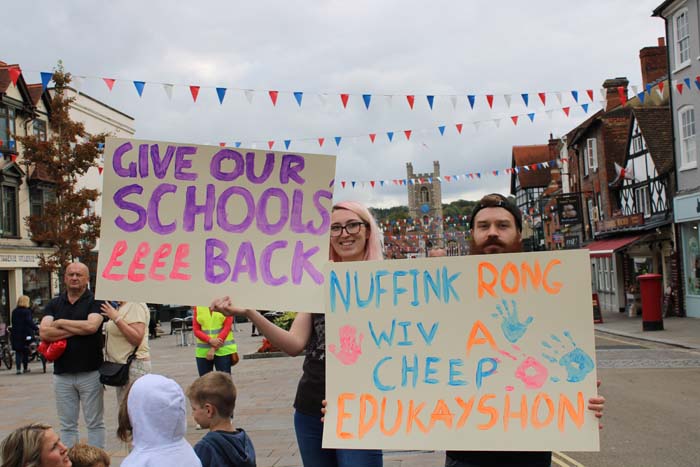 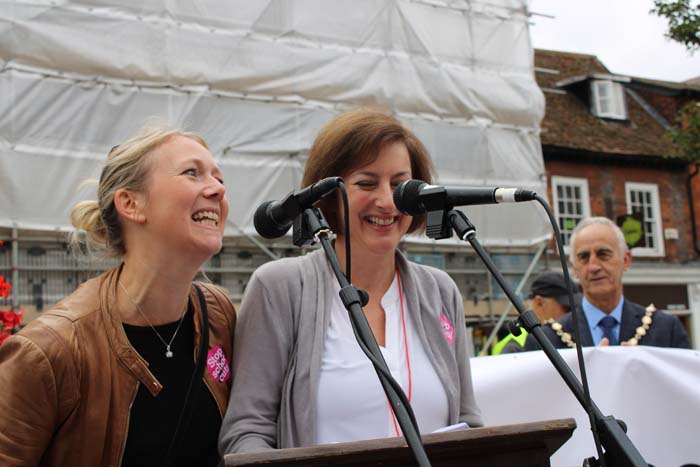 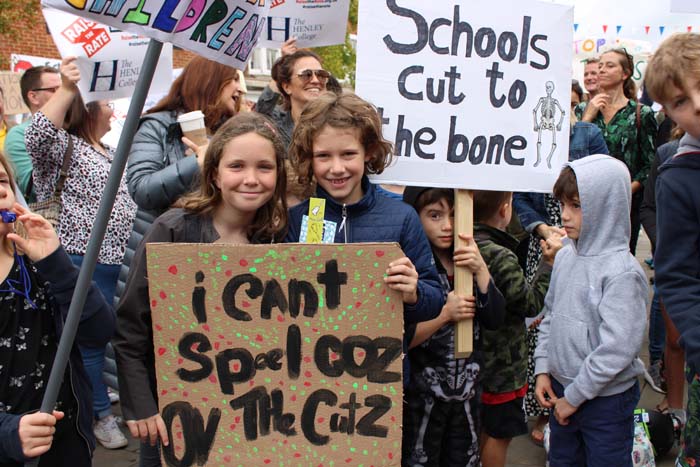 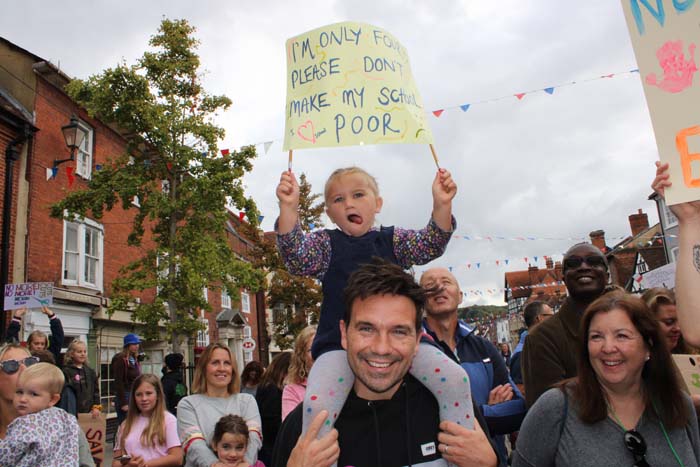 Hundreds of people came out on Saturday morning to support the Together for Education school Cuts march with banners and whistles. The campaign believes that the government announcement made last week pledging £7bn for schools in England over the next three years is not enough and money is needed now.

Councillor Michelle Thomas who co-founded Together for Education with Louise Pegley Illett opened her speech by saying, “I’ve always wanted to say this – make some noise!” Going then on to say, “We’re here today to celebrate our pre-school, schools and our college.  Henley is so proud of our teachers, teaching assistants and staff who work in them and of course our children who do their best year after year and find themselves excelling and of course parents who are so supportive of our teachers and their children’s education.”

The government announced last week that schools in .

John Howell, Henley MP said,”It’s a great pleasure to see so many people who signed my petitions here today and the result of those petitions is that we have got what we asked for promised.  I agree with your signs.  It’s start but it’s not enough.  I think it is absolutely disgraceful that parents are being asked to fund education and I think it is disgraceful that schools are asked to cut classes and to cut what they offer in order to fund the schools.  I am proud that we are putting an extra £14 billion extra into schools which will be a great start to the process.”

A member of the crowd at this point shouted – Why did you cut in the first place?

John replied, “Either you want the £14 billion or you don’t?  I am going to deliver this £14 billion for you.  I have been involved in this campaign right from the start even before Michelle started this.  I have had teachers up in front of ministers arguing about this and I have campaigned ferociously in the house to deliver this so I am very pleased that this is being delivered.  I’m pleased to be see people from The Henley College also here today and I’ve spoken to the principal this morning. That’s is where we are and that is what we are going to deliver.”

Damien D’Souza who was marching said, “I’m here to obviously back Gillotts School funding campaign today.  My opinion on the new offer of funding is that I’m with Jo Johnson on this one, I don’t trust Boris Johnson at all.  I think the Conservative MP and party members who voted for him thought they were getting a 21st century Churchill but they’ve got Mr Bean!”

All marchers were encouraged to sign a letter which will be sent to Boris Johnson.

The march then started from Market Place, down Bell Street, along New Street and back up Hart Street back to Market Place with the marchers shouting “no ifs, no buts, no education cuts”. The three headteachers then made speeches:

“All children have the right to an education, but the government cuts to the school budgets over nearly a decade have made the job very hard. Teachers everywhere work tirelessly to enhance the lives of children from all backgrounds – we are increasingly being stretched and if we do not get the funding we need we will be very close to breaking point.

Since 2014, the government has expected a significant increase in pupil performance which we would be delighted to be able to deliver and yet at the same time they have cut nearly £1 million from the Henley school budgets. Schools are expected to do more with less  – everyone knows this is unachievable. All Henley schools have pupils with a variety of individual needs, some are increasingly complex. We need the resources whether its buildings or staff to ensure that all pupils are able to fulfill their potential.

I am delighted with the recent funding announcements, but the promised funds will restore only some of the cuts that have taken place since 2010. I hope that the government at least delivers on its promises, but fear that it is simply an election promise that is being used to appeal to the voters.

Teachers are committed to their profession and will always do everything they can to provide the best education and care within their means, but the government needs to keep their promises to enable teachers to continue providing what our children deserve.”

“It’s incredibly emotional to see everyone this morning.  The additional funding announced last week is very welcome. It is testament to the impact of the campaign from unions and professional associations, and grass-roots campaigns led by headteachers and parents/local communities, such as this one.  There are two problems not enough now and not enough in the future.   It is not enough now because many schools cannot balance their budgets in the current financial year and teachers pay rise for 1 September is still not confirmed – we expect 2.75% with government only funding 0.75% – so that is 2% for schools to find themselves in the middle of the financial year.

It’s not enough in the future because at Gillotts, our funding has been cut in real terms between 2012 and 2018 by 16%. Just keeping up with inflation will use up about £3 billion of the additional £7 billion – our share of the remaining £4 billion won’t get us back to where we were in 2010 (- it’s only about a 9% increase).   There is also no mention of capital funding – during austerity our capital funding has been reduced by 80% and we now only get £18,000 a year – an incredibly small sum for a site of our size, and with buildings that are now 60+ years old. We desperately need a realistic annual allocation.

Education is a vital strategic investment in our children and in our country.  There are so many challenges that the next generation will face and we should act now to make sure they are well prepared – knowledgeable, resourceful, confident and resilient.  We are committed to delivering – but we must have enough funds if we are to do that well.”

Nine years ago we received nearly £5,000 per student but now just base rate of £4,000 and at the same time costs have risen significantly, and the needs of students have become more complex. We are expected to do much much more for far less money.

This under investment has not only risked the quality of education, but the health of our economy and opportunities for social mobility.

Our college and the schools of Henley stand together here because we want the best education and opportunities for our children.

Every child and young person in this town deserves the very best education to flourish and thrive in a competitive global community.

Afterwards Michelle presented book tokens to three winning banners and thanked Louise for her idea of marching.  She said, “It doesn’t end here today we need to keep fighting.”