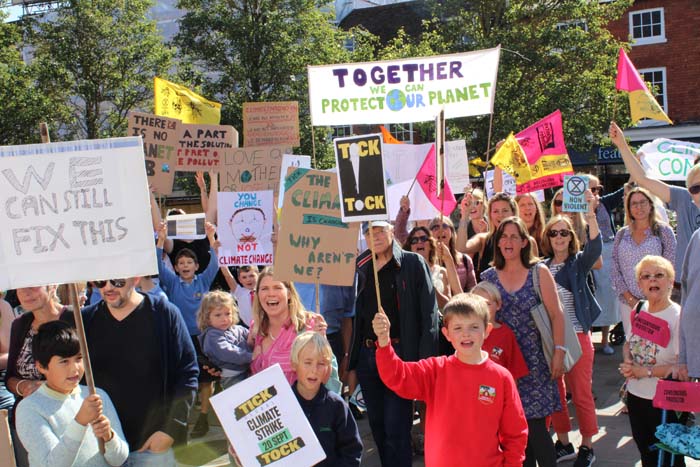 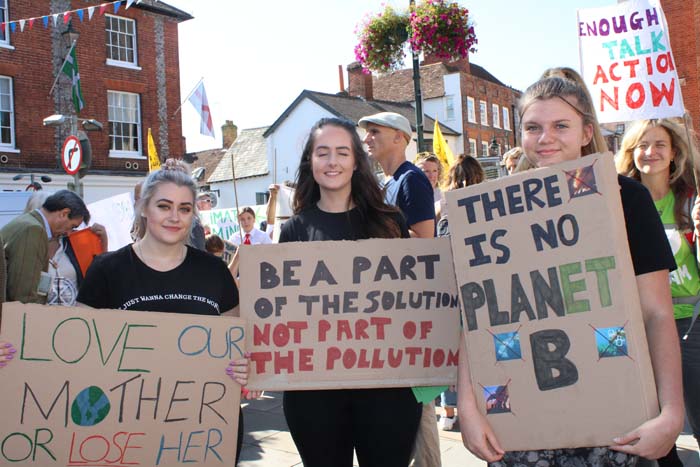 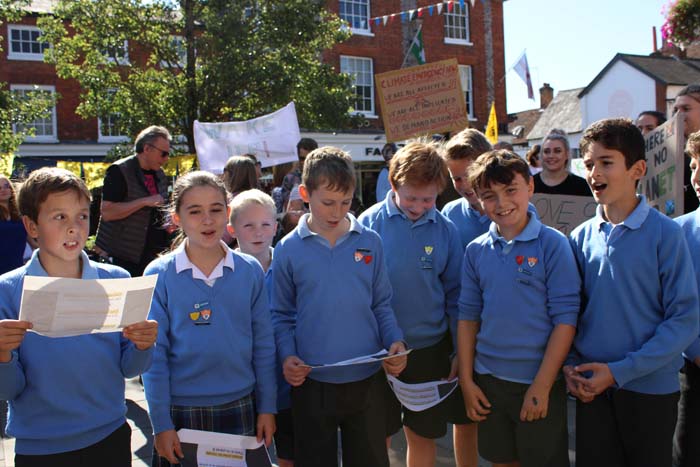 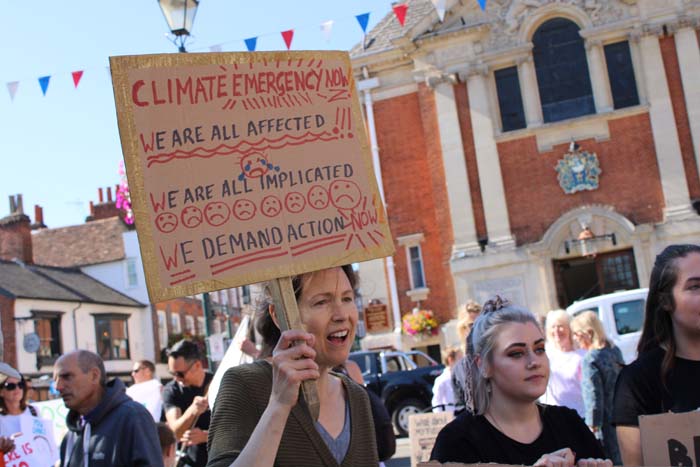 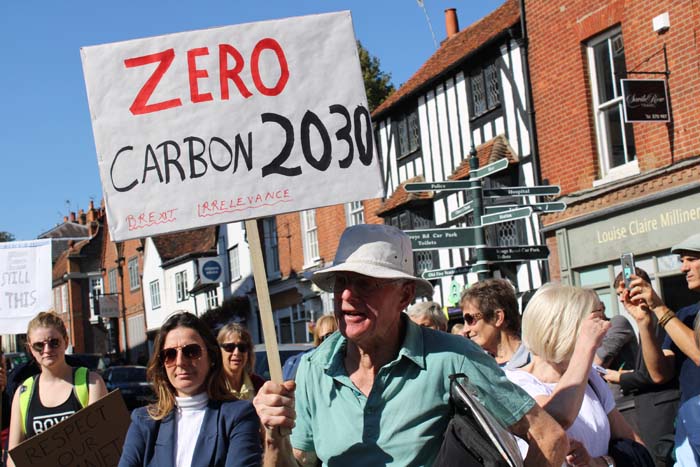 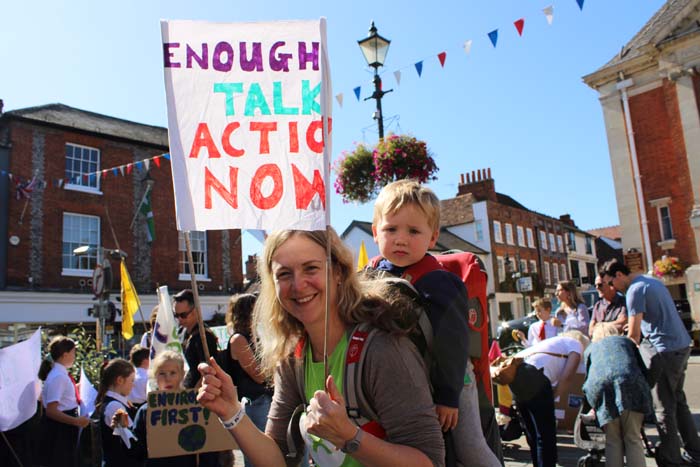 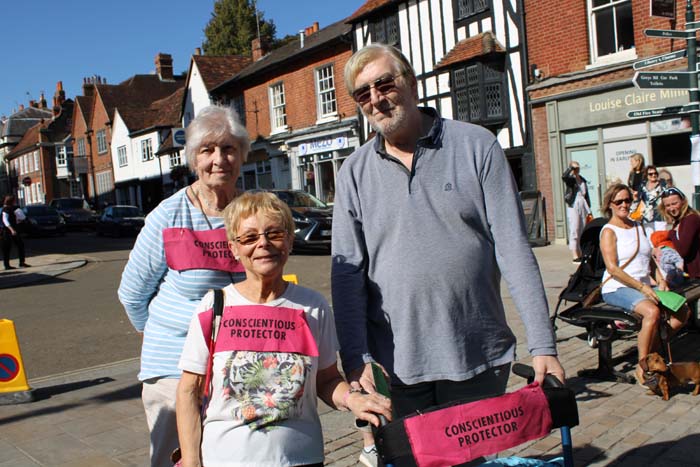 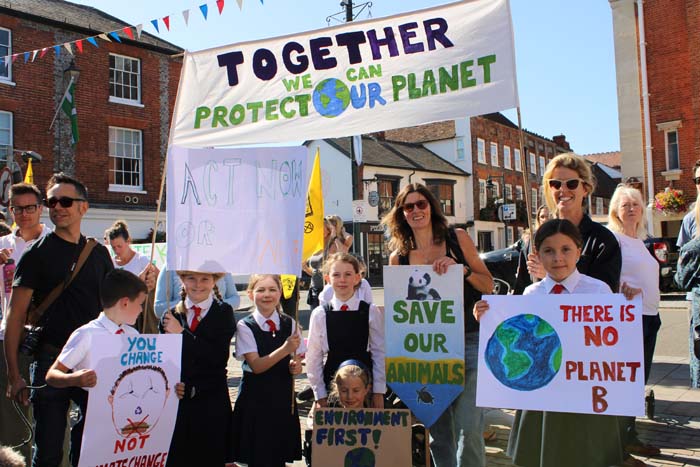 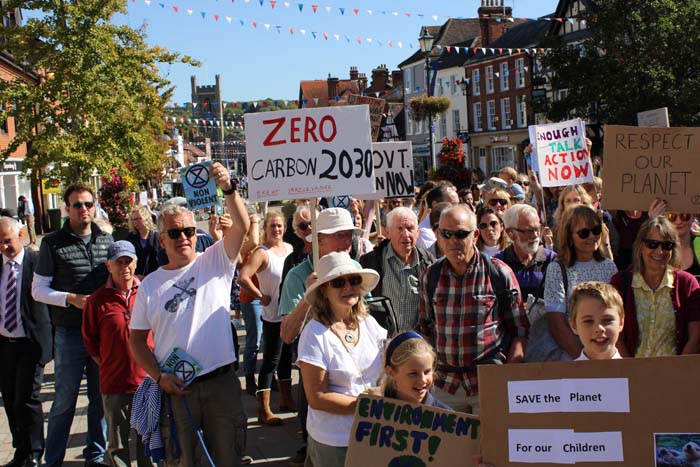 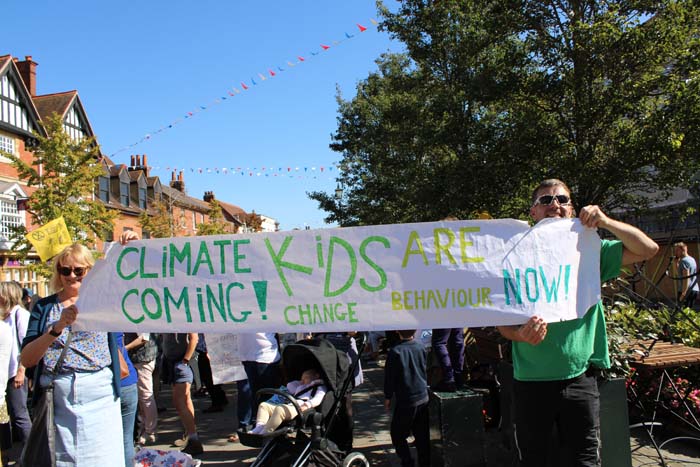 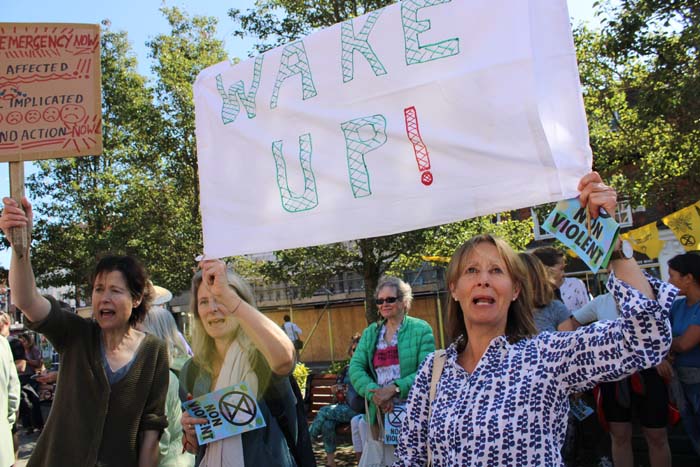 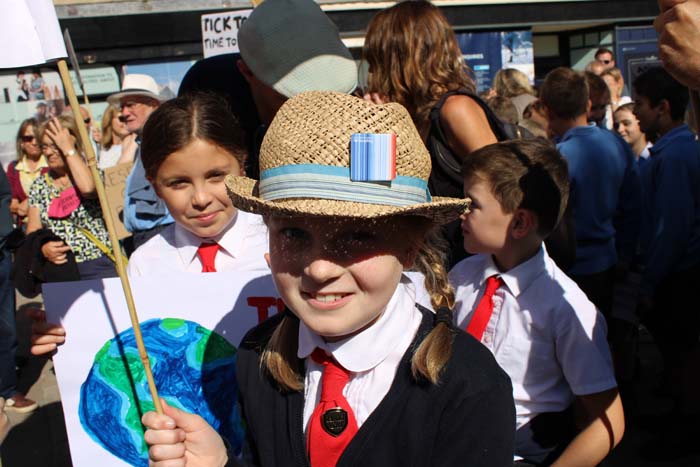 There’s no planet B, Together We Can Protect our Planet, The Climate is Changing, Why aren’t we? were just some of the words on the banners held up by a large number of protesters both young and old who came out for the Henley Climate Strike protest in Market Place today at lunchtime.

Shirley, an older protester said, “I’m here because obviously I believe in the cause but also our generation is often blamed for creating it in the first place.  So it’s important for us to get behind the young people and the change that is needed. We have to protect the planet and we have to do it consciously in the way that we live from day to day as well as the social things with all the things that go with that – all the legislation etc. that is needed and people need to take individual responsibility.”

Tabitha, 17 who is home schooled said, “I’m here today because there is a climate crisis and it’s about everyone’s future here.  I think everyone is making small changes but we really need to make bigger changes by changing our diet.  Animal agriculture is the biggest cause of global warming and it so easy to be vegan now and it’s the best thing you can do for the environment.”

Grace, aged 11 from Sacred Heart School added, “I’m protesting today as it matters to me that the our planet is getting too hot.  If we don’t act now we may never be able to act again.  I’m taking action with my family by not buying anything that is wrapped in plastic when we go to the supermarket.”

A group of St Mary’s School children were chanting, “Climate change is not a lie. Do not let our planet die.  One planet – now’s the time. To not take action is a crime.  School strike for climate.  There is no planet B.” 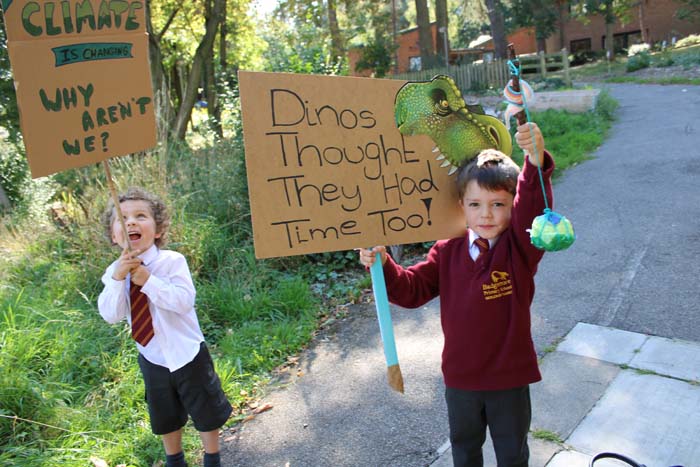 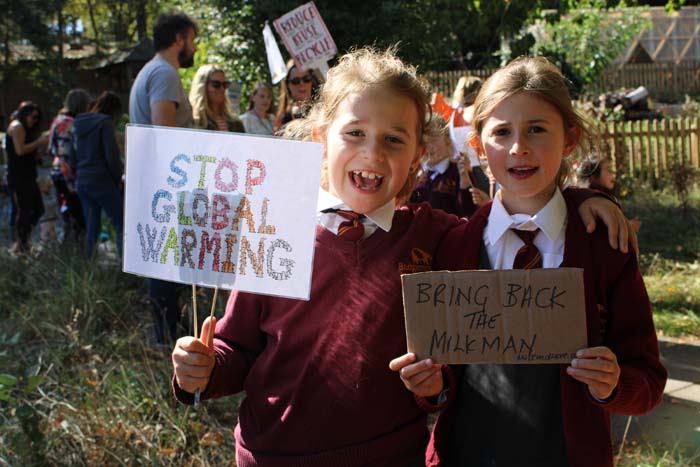 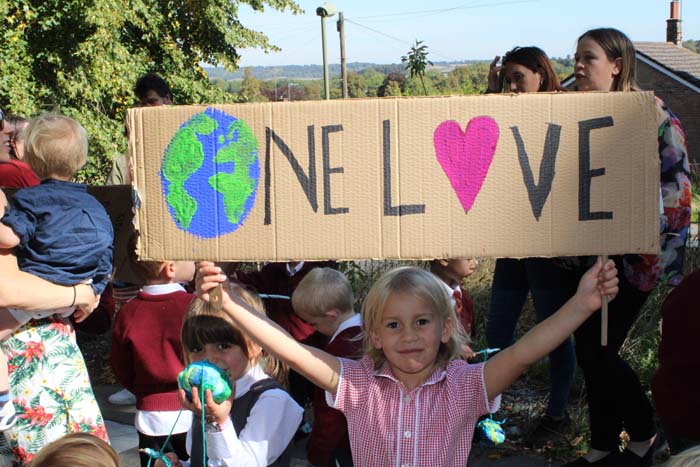 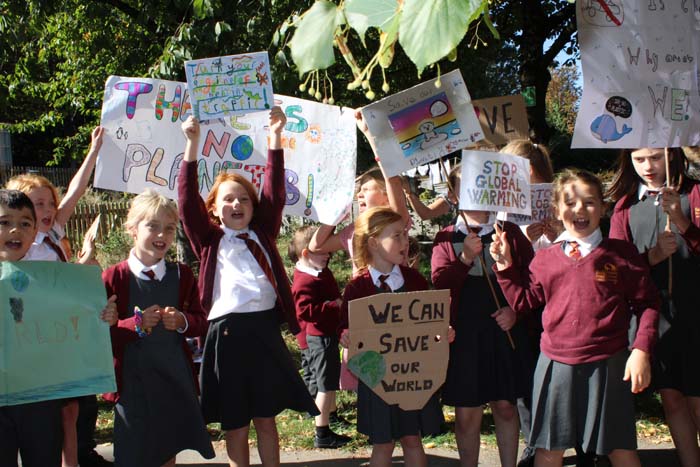 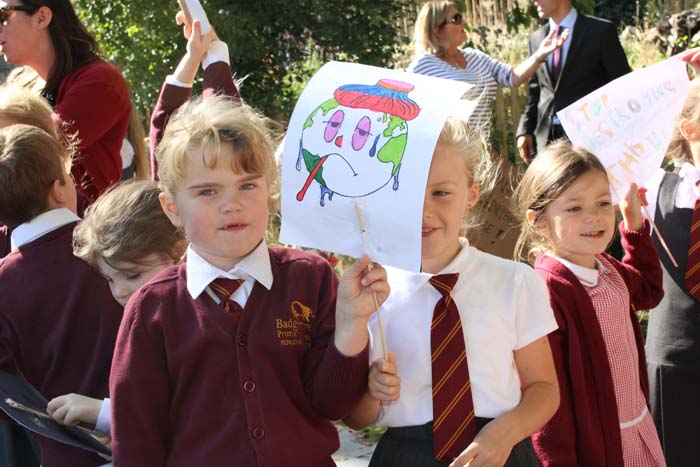 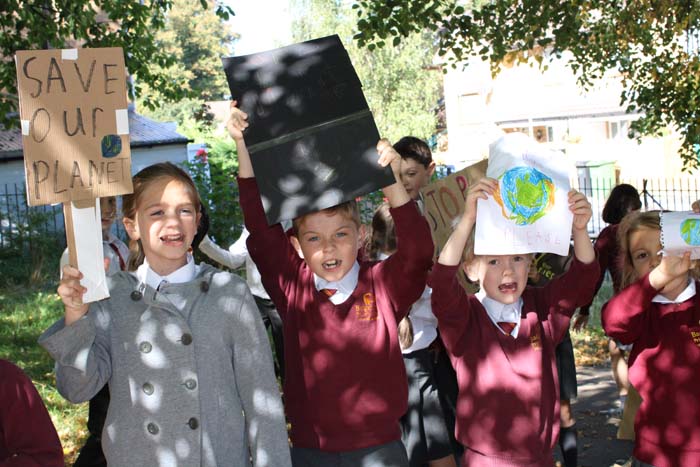 Badgemore School children hosted their own protest in their school grounds in Hop Gardens and children made banners at home and in the after-school club.  Headteacher, Tim Hopkins said, “We wanted to support today and this is part of the children’s education.  It’s the small things we do.  We need to do things individually that make a difference.  At the school we already encourage plastic free lunches, walk to school, ask parents to turn off their engines outside the school and saving electricity by turning off lights.

Euan, Poppy and Maggie in Year 6 helped to organise the school protest.  Euan said, “Children need to know what global warming is and how they can help.  The children made up their chants in the lunchtime which included “Places are stormin’ because of global warming and The ice is melting because we’re smelting.”

Reception children made paper globes on sticks made from recycled paper and sticks found in the school grounds.  They learnt that the planet is getting warmer through pollution and ways in which they could help look after the planet like recycling. 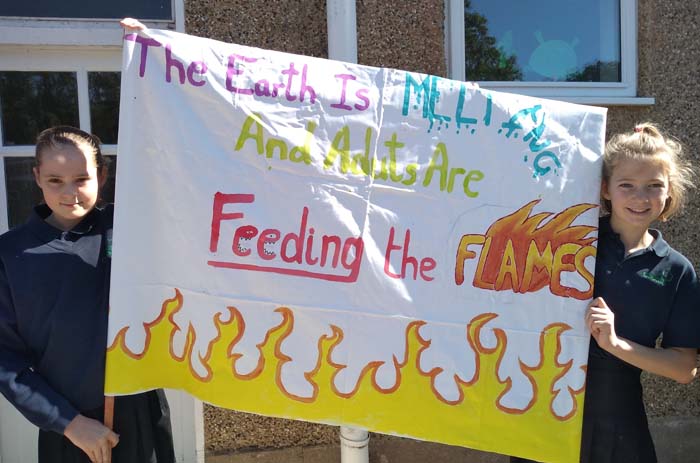 Students at Gillotts organised a silent protest at lunchtime to support today’s worldwide action to ask governments to respond to climate change.  The students made their own banners and marched around the school gathering support wherever they went.

Madeline Moe, Year 7 student at Gillotts School wrote, “Climate change is real and we as people really need to see what could potentially be happening right before our eyes. I only recently found that I am really passionate about climate change and have since then learned all about what is actually happening. I know that the new thing going around is the saying “save the turtles” and while yes plastic straws are a big problem there are lots of other impactful ways that we can make a change. 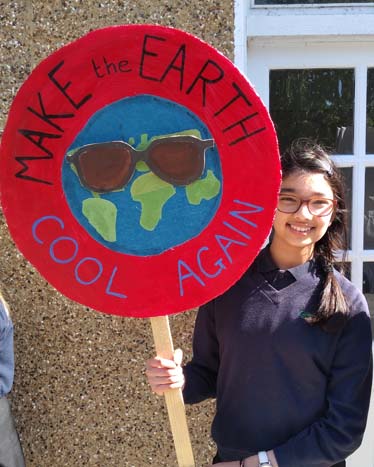 One of the other major problems we face is people not believing it is true and not doing anything. If all or even most of humanity could realise this and actually do something to help we would be a lot better off. I know that to older people climate change is not that big of a deal because they won’t be around to see the full effect that they have caused on mother earth and the planet. But we as children are going to be the ones to really feel the heat of global warming and climate change. I think these strikes that are happening more and more are a really good idea because we can then spread the word more than before. And as I said above we need to get more people believing that climate change is a real thing.  So I think we need to organise more strikes and marches for people to go to. Also when people come to marches for things like climate change they will either go out and buy a banner or buy the stuff to make one. And if the whole point of these marches is to reduce reuse and recycle then bring a recycled banner! You can use any scrap paper or old cloth and old blankets to make fantastic banners and if they are cloth you can even use them multiple times.

Another key thing in spreading the word of climate change is teaching children about it in school so that they can be inspired to do more about it at home. At my home I have been pushing my family to become more eco-friendly and now we do not use our tumble dryer, we put on a jumper instead of turning on the heat, we put our food in the food waste instead of the garbage, we do this because when the people come to collect our food waste they take it to special places and put it in a machine called an anaerobic digester making our food waste into lovely renewable energy!!  So when you are at home instead of putting scraps into the rubbish bin throw it into a food waste bin and even then you are helping the environment! These are all reasons that I am going to these marches because climate change IS real and we need to start doing more!” 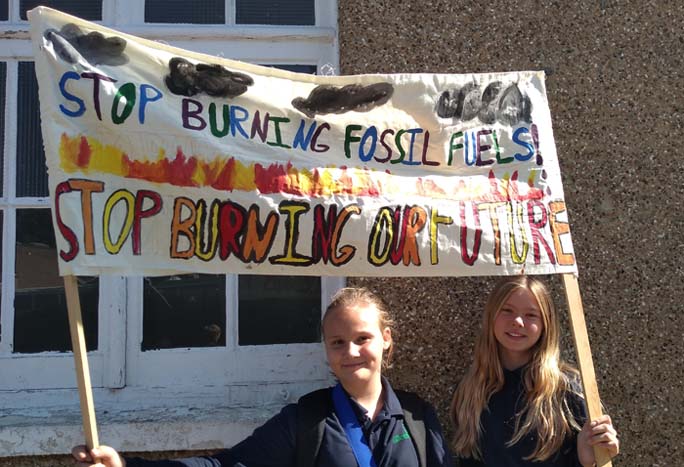 Be Well Festival at St Mary’s School
Scroll to top