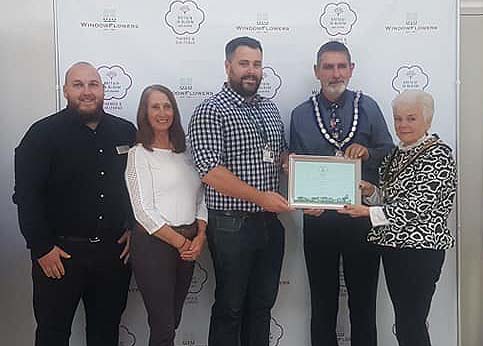 Henley were awarded Gold yesterday (Tuesday) again at the Thames & Chiltern in Bloom award ceremony in Woodley after not entering the competition last year.

The judging took place in July this year when the two judges were take on a tour of the town which began at the ‘green wall’ on the Leichlingen Pavilion at Mill Meadows, and included the Marsh Meadows wildlife area, a trip down the river thanks to Hobbs of Henley, Greencroft allotments, Freeman’s Meadow, the Forest School at Badgemore School before ending at the new community orchard in Paradise Road.

Henley has been awarded Gold in the regional awards six times.  The town didn’t enter last year due to the sad loss of Parks Services Manager, Gareth Bartle.

Chair of Henley in Bloom, Councillor David Eggleton said, “After a year out to come back and to take Gold is amazing.  I had a feeling that we were going to do really well as we put a lot of effort into it.  Thank you to all the people who have got involved (it’s like having all the right ingredients for a great cake) who helped us achieve this goal – Park Services team, Gardening Buddies, Friends of Freemans and Northfield End, Gainsborough Residents and all the schools.  Please keep up the good work.  We still need more people to get involve and help – if you’re retired and looking for something new to do, we’d love you to become a Gardening Buddie.  Get in touch with the council.”

As well as being awarded Gold in the town category, Henley was awarded the ‘Involving Young People’ and ‘Managing Environment’ awards.

The ‘Involving Young People’ award recognised the school and community group projects which have included the schools hanging baskets and recycling initiatives, 1st Henley Brownies helping to plant out the Greys Road corner planters, the Henley Cubs and Scouts planting hedge whips at Makins Recreation Ground and the new The Junior Wildlife Ranger booklet available from the Town Hall which encourages youngsters to try out fun activities to complete along the river, in your garden and at the community orchard on Paradise Road developed by Conservation Park Warden, Ilona Livarski.  Kyle Dowling, Assistant Parks Manager said, “We love working with young people and it’s really nice to get recognition of this.”

Henley Town Councillor, Stefan Gawrysiak obviously impressed the judges for the town to be awarded the ‘Managing Environment’ award when he talked to them about how Henley Town Council were tackling air pollution in the town.  He informed them about the planters that have been placed on Duke Street with hairy leafed shrubs in that draw in toxins from exhaust fumes through the leaves, the ‘No Idling’ campaign and the plans for the new 20mph new traffic management system which will keep the traffic moving around the town.

Three Henley neighbourhood groups entered the It’s Your Neighbourhood’ awards.  Although part of the RHS Thames and Chiltern Regional Britain in Bloom Awards, the ‘It’s Your Neighbourhood’ category focuses on more than just flowers. Though Gardening Achievements make up 30% of the judging, another 30% is awarded for Environmental Responsibility, and a massive 40% is given to Community Participation Gainsborough Residents Assocation were awarded ‘outstanding’ again after being awarded this highest level for the first time last year.  Friends of Northfield End and Bell Street were awarded ‘thriving’ (second highest level) after entering for the first time which recognised the work that they have put into creating the lovely new green area at the Marlow Road roundabout.  Friends of Freemans were awarded ‘advancing’ for their work to help to and enhance this lesser used green space which has seen fruit trees and wildflowers planted this year.

David who is also Chair of Gainsborough Residents Association also added, “Thank to Paula Isaac (Vice Chair), Rob Isaac and everyone that has helped achieved the outstanding award again.  Just keep on doing what you’re doing.”

Helen Gaynor from Friends of Northfield End/Bell Street said, “We were ONLY 7 points off  ‘outstanding’, so, a great achievement overall and one we can be very proud of in the first year of entering. Thank you to everyone who regularly supports our efforts, particularly those who go above and beyond the call of duty (you know who you are), the volunteer support from local residents has been tremendous”

Badgemore School were also awarded Highly Commended in the Mark Mattock Schools Challenge Cup. Headteacher Tim Hoskins said, “We are delighted to have received this award for our outdoors environment. Using our outdoor space is a big part about how we learn at Badgemore and it is constantly producing new educational opportunities. It has taken a considerable amount of teamwork and planning to have reached this point, but it has been worth it. The whole community have been involved in the redevelopment and we sincerely thank everyone who have been involved.  Recently, we have been pleased to welcome different community groups to our grounds and we certainly encourage community use in the future.”