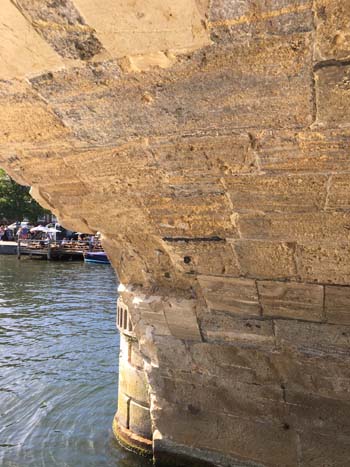 I refer to Ruth Gibson’s letter have-your-say-lights-will-have-long-term-damage-to-historic-bridge/ representing HA&HG (Henley Archaeological & Historical Group) regarding the proposal of LED lights on the Henley bridge and respectfully point out the following:

1, I am the applicant (not Robert Drayton) this has been pointed out several times to Wokingham District Council (WDC) and other parties, he is my agent.

2, The application originally was submitted in July/Aug however WDC needed the bridge surveyed which I did in time for their early Sept meet.

However WDC unfortunately never filed the survey drawings with the application and it had to be put back to the early Oct meet.

I would point out I submitted the drawings 3 times and both the surveyor and my agent also sent it direct. Only when I asked for the CEO of WDC did it get finally get acknowledged.

3, I was asked by WDC why I had not applied to SODC and others at the same time.  That’s my decision – all parties will be involved in due course.  I responded and said I hope to get this passed through WDC first then forward duplicate app to others. I also asked as it’s all ON line portals these days why can’t they send the links? No response.

4, Ms Ruth Gibson of HA&HG is showing her complete ignorance on structural concerns. (I address later) However I would ask HA&HG and other authorities to look at far more important issue of the serious damage caused by barges over the last few months. I’ve highlighted this several times in the last 2 years but alas the serious damage to this historic grade 1- 1786 bridge nobody takes seriously.

I enclose a picture taken last weekend of the underside of centre arch – when the enormous cracks get bigger each time I investigate – only when the bridge needs closing then it may be taken seriously!

I am a great supporter of English Heritage and all the other well meaning organisations that protect our heritage. But technology today is such that damage to this fine bridge is that in reality – the fixings will strengthen the mortar not cause further harm.

Gluing does not create damage either but we all agree we have proven it’s unsightly. Incidentally the weight of all these LEDs is equivalent of 2 push bikes – why doesn’t Ruth Gibson address the unauthorised articulated lorries that use Henley as a short cut? That’s the next challenge if I get the support!

5, Oxford CC who have shown great vision by backing this LED bridge application and have made their senior bridge engineer available to support this application and give us technical support. YES we will be testing the fixings well before final application.

6, Surely Ruth Gibson and others senior personal must be aware that every bridge in London has applications for LED lights – that’s over 100 bridges some of which are far move sensitive to this application than Henley’s bridge.

Can you imagine what a great sight that’s going to be for everyone including all the tourists who fly into London airports!

How do you think we came up with the fixing recommendation in the first place. Perhaps Ms Gibson will be writing to every London borough against all applications!

I think it’s a question of “nobody likes change” and I understand that but in order to stay the same we must change – fortunately the technology fixings of today will outlast the bridge. That’s if it doesn’t fall down in the meantime by barges hitting the centre arch and yes at some point we must have a buffer planted upstream – but only after it’s repaired.

Britain has simply the finest engineers designers architects in the world we can surely solve the LED fixings.

I am trying so hard to be patient! My agent has recommended I give up and withdraw the application – sorry am not going to do that – it makes such a good feeling to see proper lights on the bridge as they were in 1920 check it out.

Nearly 3000 signed a petition to keep LED lights (the temporary ones) but in time we will get a much more professional lighting system on Henley’s bridge and I thank you for your support and patience.