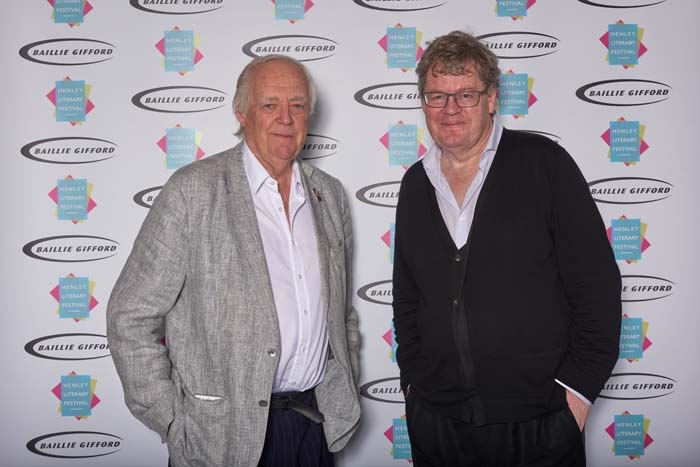 Talking at the Henley Literary Festival on Monday evening at Phyllis Court Club, Sir Tim told the audience he was keen to be famous when he was younger and although he’s now hugely famous he doesn’t get recognised very often, commenting, “only at Lords and at Cliff Richard concerts!”

As a child he was in a pop group at school.  He said, “The band wasn’t great.  I wasn’t too hopeless at it but I had a very conventional upbringing and I kind of thought it wasn’t something that people of my background do.  How wrong can you be.  Nowadays being a rock star is very respectable and being an accountant is very dodgy! Back in 1962 the reverse was true.”

After leaving school Tim started to record a few songs on tape, He said, “Those led nowhere but one of the songs I wrote did get recorded so I thought maybe I could do that as a hobby!  I never thought I would make a living out of show business or writing songs until I did!” He realised when he did become famous that there were downsides to it though. He commented, “The more successful you are, the more people try and tell you what to do.  It doesn’t give you artistic freedom as it should do.”

Sir Tim meet Sir Andrew at the age of just 17.  Tim explained, “We had just left Westminster School and through the one song that I had recorded I heard that there was another young songwriter.  I wrote him a letter saying that I gather you’re looking for someone to write with-it lyrics and I got a call back.  I found out though he was only really interested in writing for theatre.  He really wanted to be Richard Rodgers but I still vaguely wanted to be Elvis!”  I realised when he sat down at the piano and played some tunes and said I’ve written 5 musicals already that I thought this guy’s good and he thought that as well!”

In 1966 after signing up to an agent and getting £100 for a musical about Dr Barnardo which the duo were told would be hit on Broadway, a school master friend of Andrew’s asked them to write a musical for his kids whilst they were waiting.  Tim recalled how he wrote Joseph and the Amazing Colour Dreamcoat and told the audience how the original lyrics of Joseph’s Coat was just red and yellow and green and brown but the kids actually added in all the other colours.  He said, “I still can’t remember them all (27 colours).  A few years later there was a review in an upmarket paper which said, the genius of Tim Rice’s is at it’s best with his wonderful list of colours which was the only bit I didn’t write!”

Talking about writing the lyrics for musicals and the rhymes within in them.  Tim explained, that some of his original musicals contained in-pure rhymes like “fine and time which people don’t notice and are not pure rhymes. Nowadays I wouldn’t allow them and I’ve changed a few of them in the original songs.”

Writing a musical, Tim told the audience it generally goes in the order of plot and structure, music and then lyrics.  Tim explained, “The story line is key.  Andrew would write the music suitable for a scene and then I would write the lyrics.  He’s like the meat and the sandwich and I’m like the crust!”

However he found out when he started to write the Lion King that Elton John always like the words first. Tim said, “I suggested Elton for the Lion King and I thought like all good composers he would have a lot of songs lying around he hadn’t used.  I asked him to send me some tunes and he told me hadn’t got any and not even any bad ones as I thought even a bad Elton song would be pretty good!  He said, no, I only write tunes when I get the words.”

Sir Tim went on to say, “The plot of an animated film like Lion King can change radically.  It’s not like a movie with Brad Pitt in it if you cut him from three scenes he and/or his agent would complain, if you cut a giraffe you don’t get a moan!”

Jesus Christ Superstar, got Superstar added after Sir Tim saw a headline in Melody Maker about Tom Jones.  He said, “The word Superstar was just coming into vogue then and it got a huge reaction particularly in the US when we released the record. Creating an LP just at the time when they were taking over from singles was a masterstroke.  Until we made the record no one else wanted it.  We could have ended just doing it the Theatre Royal, Plymouth for 3 weeks!”

Over the years Sir Tim has won many awards including an Oscar, Emmy, Grammy and a Tony.  Asked which one meant the most to him, Sir Tim replied the Pointless trophy which he won with Don Black which he said was “tiny”.