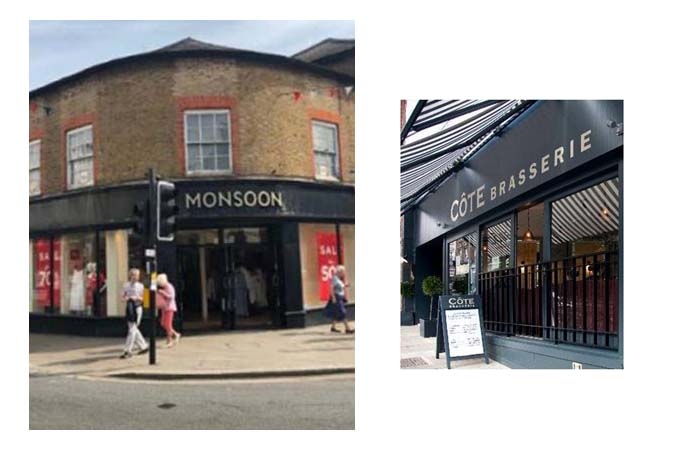 The nationwide downturn of the high street continues to affect Henley with more businesses closing but there are new openings and changes in the pipeline too.

Last week an application for a change of use has been submitted for the Monsoon shop on the corner of Bell and Hart Street by the nationwide restaurant chain, Cote Brasserie.

Harrods Cafe have this week announced they will open on 28 October, .informality art gallery opened last week in Market Place and Crockers of Henley have started work this week to convert the old Loch Fyne restaurant and are planning to open in Spring 2020. The Shellfish Cow who have a restaurant in Wallingford are opening their second site in the old Royal China Chinese restaurant on Reading Road. A new cafe will be opening in the old Sparkes jewellery shop on the corner of Station Road and a new window company will take over the small shop at 6a Hart Street.

In Friday Street, Hot Gossip is relocating to the old Bohun Gallery opening and Vintage Vogue and Daisy Boutique will be closing over the next couple of months. Phase Eight on Hart Street, Sharps Bedrooms in Bell Street have also both closed and In The Groove Records on Reading Road will be closing before Christmas as their lease is coming to an end after 6 years. Owner Andy Tucker, previously ran Henley Records on the corner of Station Road and he plans to open a shop in Oxford where he is moving to.

Saturation of nail bars has finally hit the town with the latest one, Galaxy Nails closing which opened in the old Blue Cross shop on Duke Street just a few months ago.

It’s not just shops that are being affected by the downturn, the Turkish restaurant Mezo in Market Place have closed their doors along with Thai Orchard on Hart Street this week.

Henley Town Manager Helen Barnett said, “Despite the uncertainty in the wider retail market, Henley-On-Thames is still thriving. Recent occupational deals show that the demand has been from both long-established retail offerings and new businesses wanting to gain a foothold in the market. Landlords and tenants are both taking advantage of break clauses and the end of leases so we have got some very exciting things coming which keeps the town fresh. We are delighted that Harrods will be opening at the end of October, Crockers are now fitting out in Market Place and we have the new contemporary Art Gallery .informality which opened last week.”