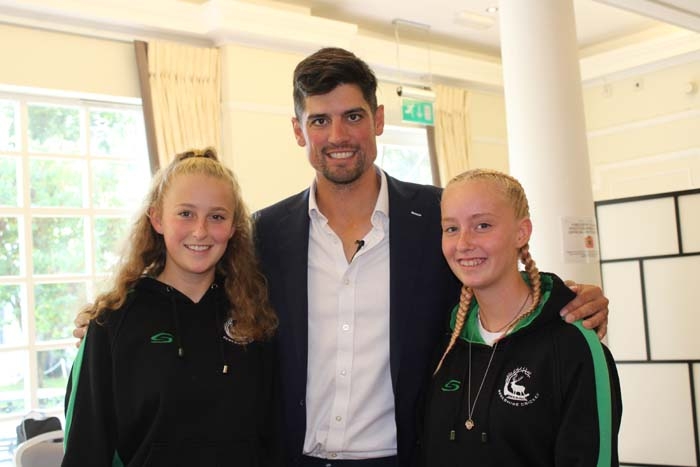 Scoring the fifth highest runs in test history (12,472 runs) and described as simply the greatest ever English batsman there has ever been, earning more caps and captaining more games than anyone in the history of English cricket, Sir Alastair Cook came across as a very humble man when he was introduced on Sunday morning at the Henley Literary Festival.

Asked about winning the Ashes in Australia in 2010/2011 after England not winning there since the late 80s.  Sir Alastair replied, “You get lucky as a player.  The likes of Mike Atherton and Alec Stewart have never won it.    I was lucky to be a player in that era and it was great fun.  We had great nights out celebrating back then when we could get away with it a lot more.  We didn’t punch people like Stokesie but we had a great time.  I lived a dream and created memories and experiences that were so special.”  Having long arms, Sir Alastair was asked who would win in a fight between him and Stokes, he replied “seeing what he did to that bloke in Bristol, definitely him.”

You might be surprised to learn that Sir Alastair and Jimmy Anderson are really good mates although they have had their ups and downs.  Sir Alastair explained, “The first time we played against each other was in 2005. He bounced me out which is embarrassing considering he’s a medium pacer!” He sent me off and then called me everything under the sun.  We then went on tour in 2006 and we still weren’t talking to each other and had to sit on a plane together to Antigua so I broke the ice.  I asked him when you called me that name did you mean it and he replied no I call everyone that!”  Another occasion Sir Alastair didn’t pick Jimmy after resting him and he didn’t talk to him for 5 days.  Sir Alastair added, “He would often come to my room, order room service, lie on my bed and walk out without speaking and put it in on my room bill.”

Family support was very important to Sir Alastair, he said, “What Alice, my wife has given up for me for 12 years for me to chase my dream is extraordinary.  An example he gave of this was when he was due to go out on the the Bangladesh tour (2016), his second daughter was due.  He said, “I went out to do some training for the one days but I came back for the birth and then left after Isabelle was only 16 hours old and I didn’t see her again until she was 8 weeks old.”

“Not the greatest batsman”, Sir Alastair said, “I had to grind for every run I ever got. I have a strange technique, everything has to be in sync for me to score runs.”  Cricket is a game of mental strength too.  Sir Alastair said, “Cricket is a game of failure.  The fear of failure is what drove me.  Even though he scored 33 test 100s, he said, “There were 210 times I didn’t get above 50.”

When did he know he wanted to retire? Over the years his wife Alice had helped when he was unsure and kept him going, Sir Alastair explained, “On the New Zealand tour in 2016/2017 I was really struggling and my brain started to go.  It was at the test against India at Trent Bridge the following year that I knew.” He was going to tell his wife one evening when they were watching The Inbetweeners film which he loves but didn’t want to ruin the evening so he Whats App his wife the following day from the dressing room (which isn’t allowed) and she replied after typing what seemed for long 5 mins, “I know.”

Sir Alastair thought that the ECB handled the Kevin Pietersen bullying saga “really badly.” “He behaved wrongly and confidentially it was agreed and under contract that I wasn’t allowed to say anything and I looked like an idiot but KP could give his side through social media.  It clearly affected me badly as I didn’t score a test 100 during that time.”

What does a young man of 34 do next?  Sir Alastair asked, “If you know the answer let me know.  It’s a big hole to fill.”  For the time being though he’s enjoying spending time with his young family, his young puppy and the farm he lives on.