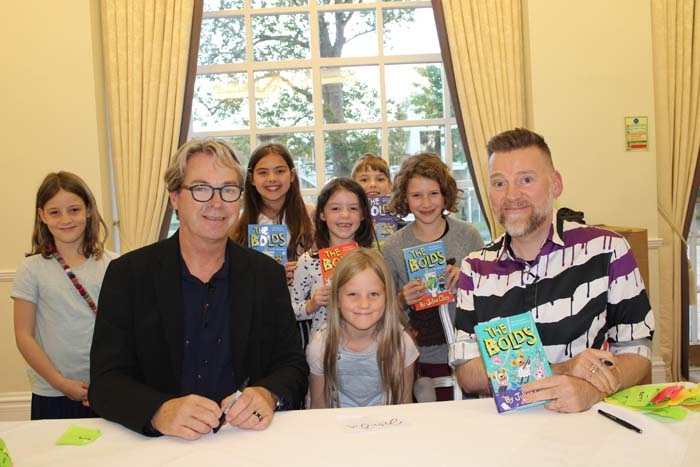 Local children got the chance to meet great authors too at the Henley Literary Festival last week including Francesca Simon, Sophie Henn and Julian Clarey.

Julian Clarey returned to the Henley Literary Festival again this year to talk about his latest children’s book The Bolds Go Wild with his illustrator David Roberts.

The Bolds are a family of Hyenas disguised as humans that live in Teddington.  They are based on a family that lived next door to Julian when he was a child who were very hairy! The new book is about Granny Imamu’s visit from Africa and is the fifth in the series.

Julian loves animals and couldn’t resist a bit of adult humour in his talk when he told the audience why his favourite is a cat because it sleeps 90% of time and can do a very clever thing!  Julian believes that everyone is in disguise as an animal and showed some hilarious drawings of Boris Johnson as a wild boar and Taylor Swift as giant anteater!

After reading a passage from the new book, Julian invited the children to come up with a disguise costume for Granny made up of unusual items for David to draw.  These included a dustbin, a shopping trolley, unicorn, fairy lights, a rocket jet pack and plastic bottles for shoes.  David then created a new creature with the children’s suggestions which started off with a slug head, owls wings, a baboon bottom and cow’s feet and was name The Flamo.  Giving out the drawings to the children in the audience Julian said,”Did you see how close I got to the general public?  They are riddled with germs at this time of the year!”

Julian has started to write the next book, The Bolds Go Green which will feature an aardvark and Julian asked for suggestions for other animals which could appear. He like the suggestion of a skunk!  He told the audience that a book is around 25,000 words and takes about six weeks.  He then sends to to David to start sketching the 100 drawings that will appear int he book.  He writes about 1,000 words at a time and was pleased to tell the audience that he had written his 1,000 words on Sunday morning before he travelled to Henley.