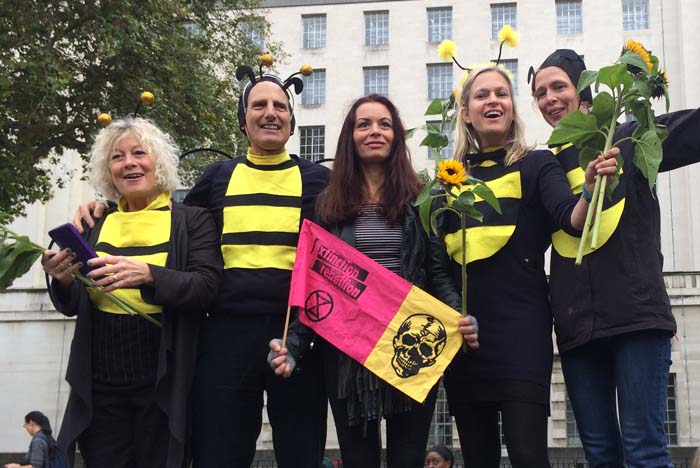 There wasn’t a sign of anyone looking ‘crusty’ on Monday morning at Henley train station just a group of eleven Henley citizens who care about the environment and who are members of the newly formed Henley Extinction Rebellion (XR) group on their way to London to join the thousands protesting to demand urgent government action on the climate emergency.

In spite of the Prime Minister’s derogatory comments this week about activists being “uncooperative crusties,” his own father, Stanley Johnson spoke in Trafalgar Square yesterday (Wednesday) to take part in a panel on politics and the climate emergency.

Henley Extinction Rebellion branch is made up of about 40 people and is rapidly growing. They come from all walks of life and represent all generations. The told us what unites them is a sense of urgency about our planet and of responsibility towards their children, grandchildren and future generations, as well as the belief that peaceful, non-violent action and civil disobedience is the only way to get public authorities to act.

“I have joined Extinction Rebellion and the October Rebellion in London because the planet is burning and there is a real urgency for governments to act. I do it for the future of our children and for my little Alice who is only two years old. Thinking about what is going to happen in her lifetime if this system doesn’t change fills me with dread,” says Katie Mulé, who works at Bremont in Henley.

“This is the most important issue of our time,” says Kate Oldridge, a lawyer and a mother of two, as she stands on a wall in Whitehall dressed in a bee costume, waving sunflowers and singing ‘Let it bee’. “This Rebellion is not some left wing, ‘crusty’ movement, but involves people from across the political spectrum, including doctors, lawyers, vicars, and professionals who understand that we must declare a national climate emergency and put pressure on governments around the world to take emergency measures. I am proud to stand up and support what I know to be right by way of non-violent civil disobedience.”

Another London rebel from Henley was Jo Robb, who is a councillor for the Green Party at the South Oxfordshire District Council. “Climate change is the greatest threat humanity has ever faced. XR are absolutely right: we must take radical steps to decarbonise our society and halt biodiversity loss. Our leaders are letting us down by declaring a climate emergency and then ridiculing those who want action. Nobody wants to disrupt other people’s lives but there comes a time when writing letters and changing individual habits is just not enough. We need government to take bold steps to change planning laws, ditch fossil fuel subsidies, and bring about a major shift in our transport and agriculture systems. Our children’s lives, and the lives of millions around the world depend on us taking bold and courageous action.”

The Henley Extinction Rebellion group welcomes everybody. For more information or to attend one of their meetings, contact xrhenley@gmail.com.

Christmas With All the Trimmings at The Baskerville
Scroll to top