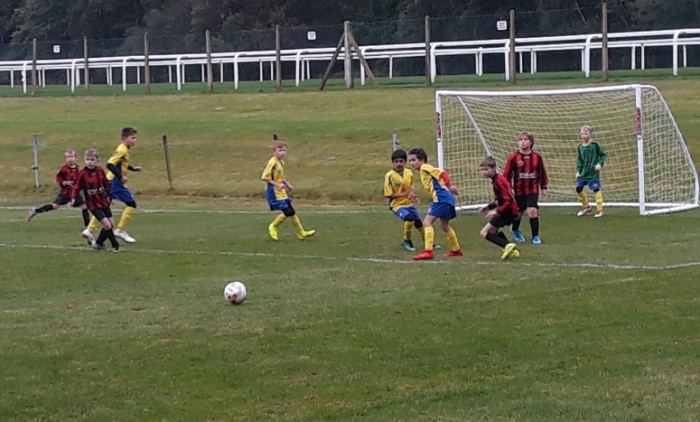 Last Saturday, Henley Hurricanes U9s made a second trip to Ascot United, this time to take on the Aces in a cup match.

Rain fell steadily during the whole match, but did not dampen the spirits of the players in an uptempo start to the game. As has been the case in recent weeks, the Hurricanes took an early lead, with Will Goulden making no mistake from inside the box. However this was to be the only goal of the first quarter, with the Aces defending efficiently and, despite good passing from the Hurricanes, they did not find a way through.

The second quarter started with two quick goals for the Hurricanes, Jack Callaway and man of the match Will Lindsay both on target within a few minutes of the restart. Following these, the game resumed the pattern of the first quarter with the Hurricanes playing well together but finding the Aces strong in defence. The Aces did make a few attacking moves but there was little to stretch the defensive duo of captain Dominic Ellis and goalkeeper Jake Thatcher. Towards the end of the half, Shiva Vadhoolan added another goal for the Hurricanes.

The third quarter saw more pressure from the Hurricanes, and this time goals came, with Luca Currie, Jack Tookey, Shiva Vadhoolan and Oscar Robinson all on the scoresheet. This quarter saw the Aces’ best chance, which forced a clearance from Jake Thatcher in goal.

The Aces began the final quarter with renewed effort, and remained dangerous on the break. However, the Hurricanes were able to absorb the pressure and added a final goal, with Will Goulden completing a brace.