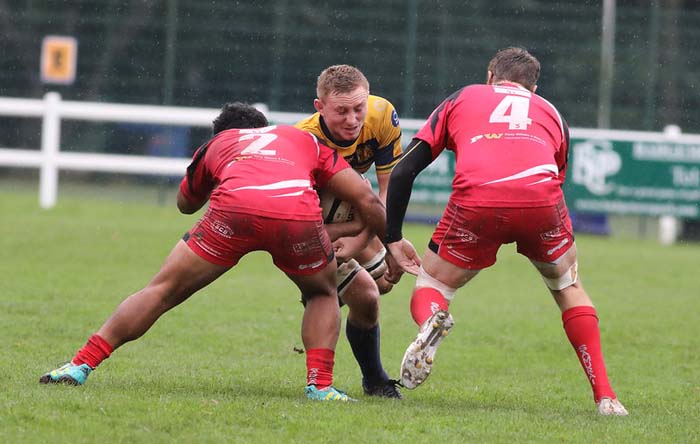 Henley Hawks had to settle for a draw in their latest National 2 (South) fixture against a resilient Redruth at Dry Leas on Saturday.

Leading 20-6  with twenty minutes to go, the Hawks should have won the game comfortably, but in driving rain, the Cornishmen were better at managing the conditions, kept the ball for long periods and earned themselves a deserved draw.

The wet weather was a good leveller and it did not suit the Hawks expansive running game that had worked so well last week against Worthing. They also came up against a solid, well organised outfit in Redruth and it was a good contest.

The opening exchanges were fairly even with both sets of forwards looking to dominate and take the game to the opposition. The Hawks looked to continue their good form from last week by trying to play an open game whilst Redruth looked to kick for position. It was the Hawks who eventually broke the deadlock with a penalty from Ben Bolster.

Henley tried to play with pace but there were the inevitable errors in the wet conditions. Will Bordill led the charges in the loose play and won a couple of valuable turnovers while Dave Hyde and Marcus Lowe were as industrious as ever.

As the half went on, the visitors came more into the game and a break by centre Jack Simmonds gave Fraser Honey the opportunity to level the scores with a penalty.

With the home back row outstanding, Henley then began to take more control and a good run from Liam O’Neill gave the Hawks the spark they needed. A good series of drives from the Henley forwards came close, Redruth were penalised and their second row Jake Clemson was given a yellow card. The Hawks  kicked for the corner and Tom Emery finished off a driving maul from the line out to give the Hawks an 8-3 lead at the break.

With Redruth a man down, continued Henley pressure just after the break from the forwards gave Tom Emery a chance to create space for Sam Lunnon and he crashed over for the Hawks second try.

Redruth replied immediately with Fraser Honey reducing the arrears with his second penalty.

With the rain getting harder at this stage, the Hawks were having the better of the exchanges. A good forward drive again resulted in a penalty which the Hawks kicked to the corner. The ever reliable driving maul was employed again and Tom Emery emerged from the drive to scamper over for a try which Bolster converted.

At 20-6, it looked as though the Hawks would go on to win comfortably but to their great credit, the resilient  Redruth forwards had other ideas and spent most of the rest of the game in the Hawks half, playing the conditions superbly by denying the home side of any worthwhile possession.

The Henley defence was excellent and kept out a number of Cornish drives but eventually cracked when Bradley Janes crashed over under the posts. Honey converted.

The Hawks continued to try and play their expansive game and Alex Burrage and Jack Robinson combined well for the Hawks putting them in range for a possible drop goal to seal the game. They didn’t take it, the Redruth defence held firm and the Hawks were then penalised for holding on.

With time running out, the Redruth forwards worked their way deep into Henley territory. Another penalty resulted in a line out close to the Hawks line and from a driving maul, Richard Brown touched down for the Cornishmen. Fraser Honey then held his nerve to convert and level the scores.

The Hawks will be disappointed that they didn’t see this game out. However, Redruth were much stronger than Worthing were the week before and the Hawks should still travel to table topping Tonbridge next week with confidence.

On the Beat… Henley Police Update September
Scroll to top