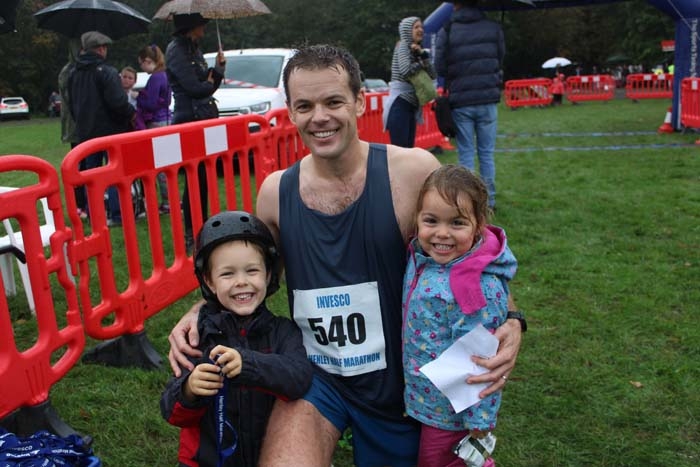 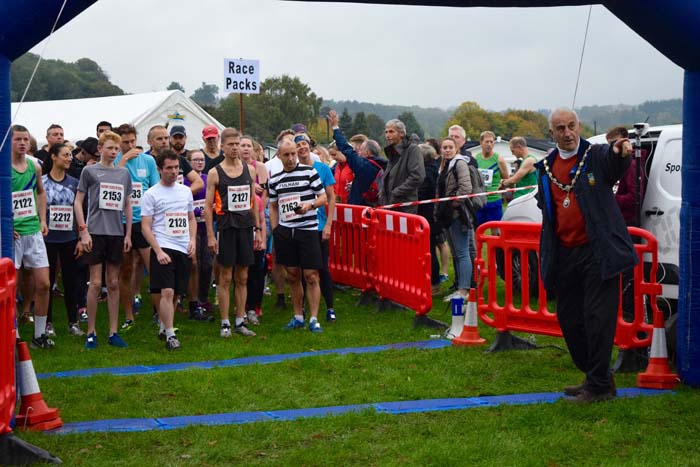 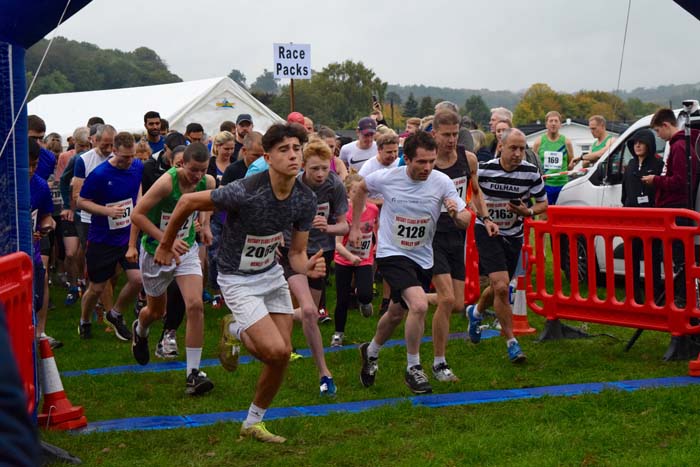 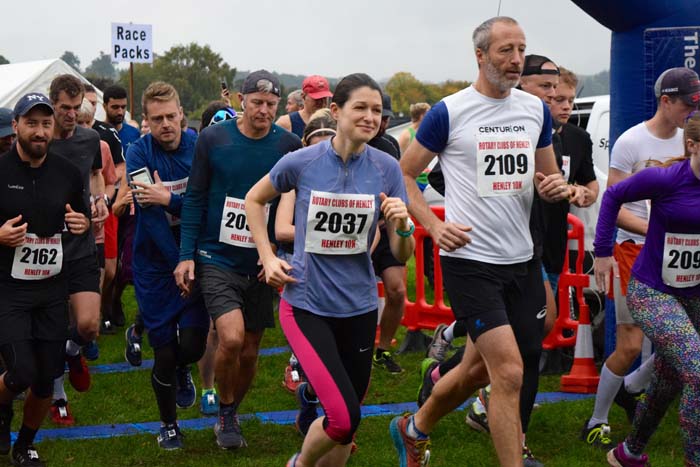 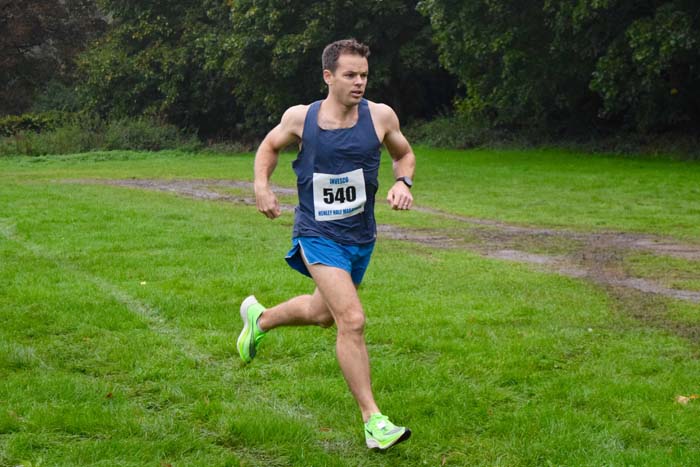 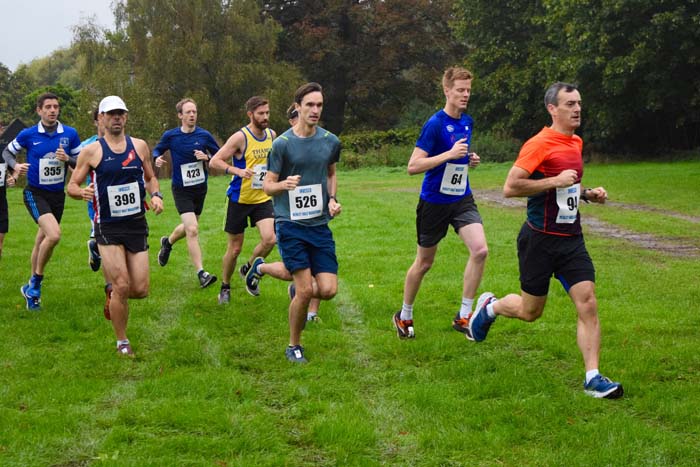 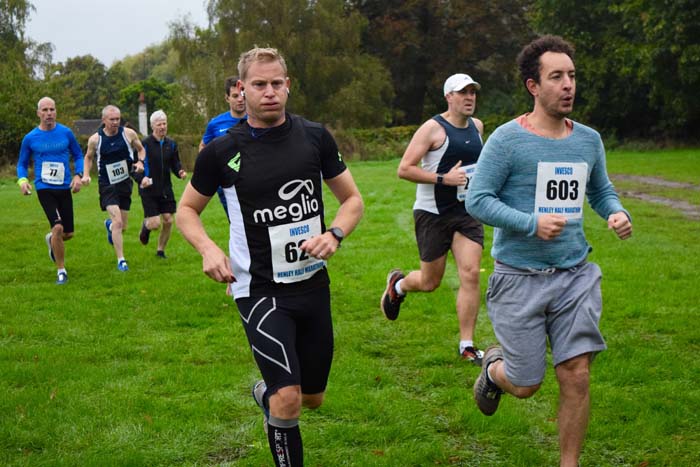 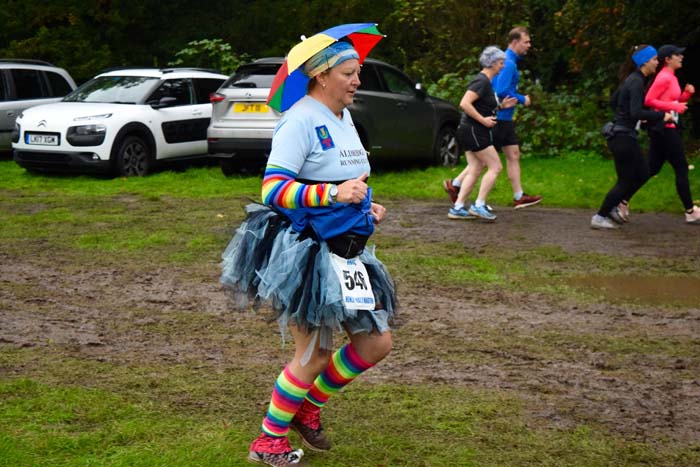 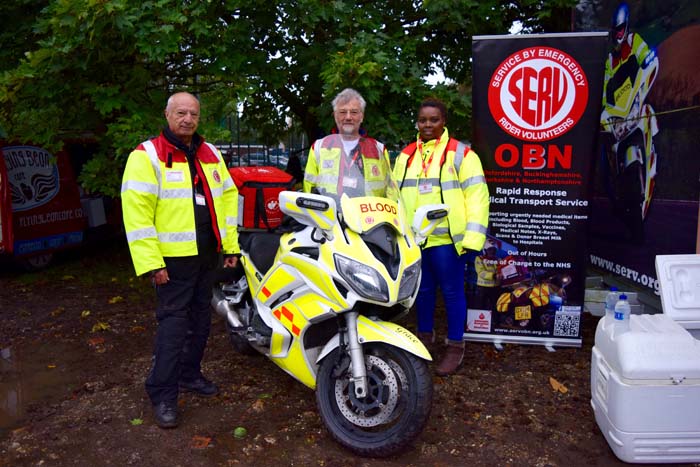 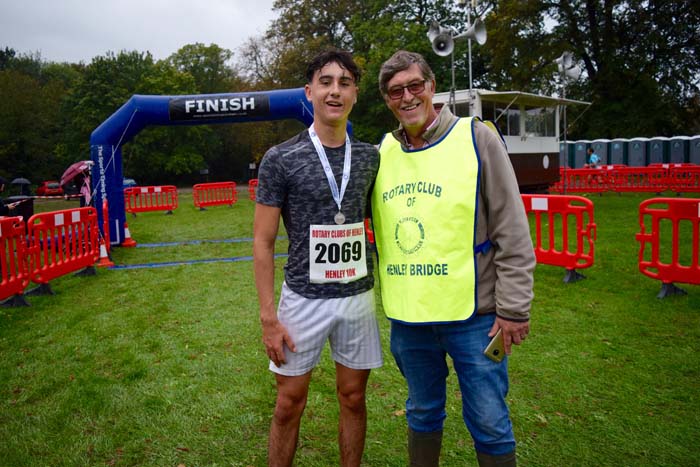 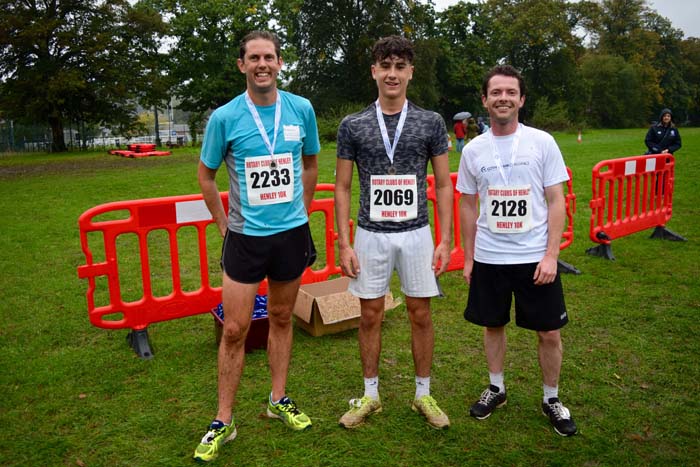 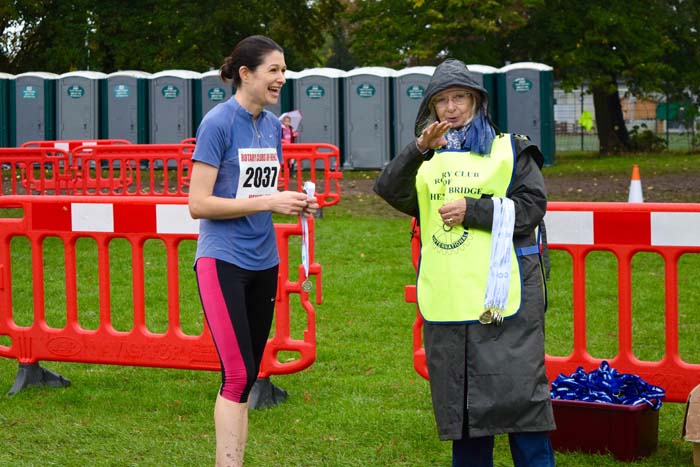 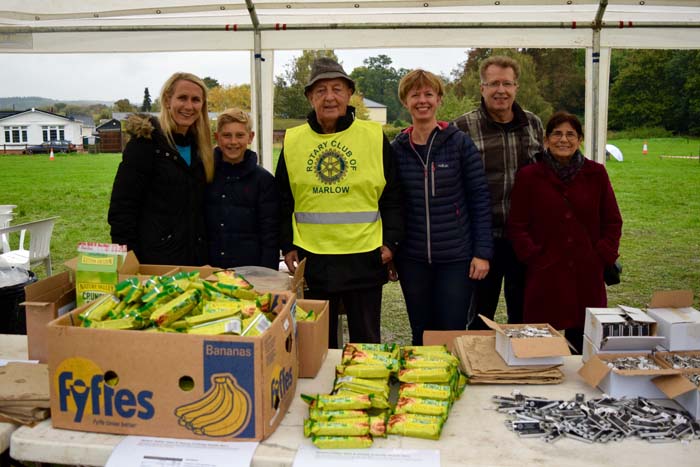 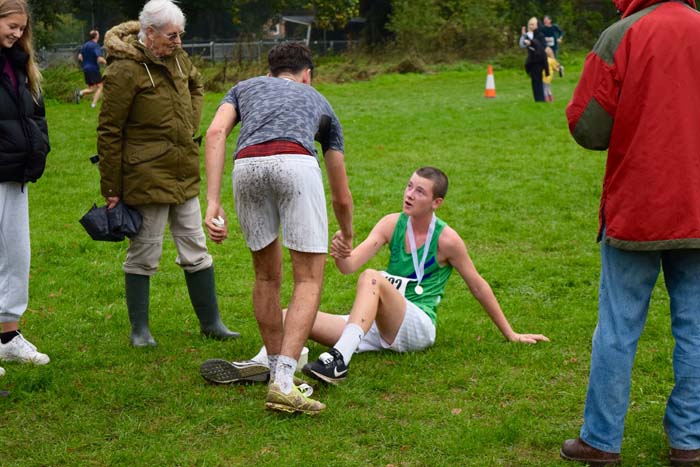 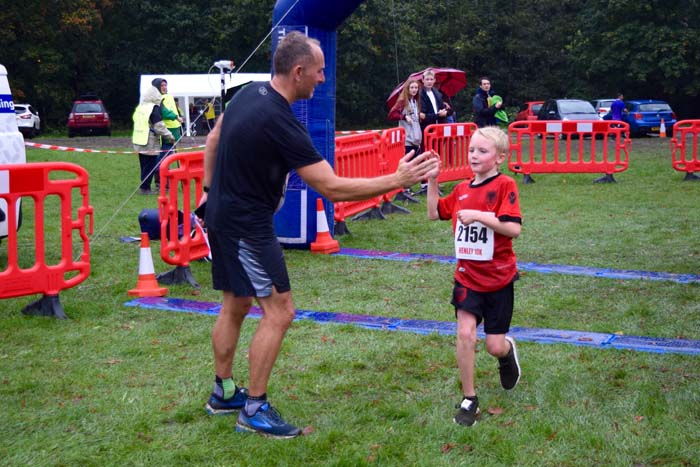 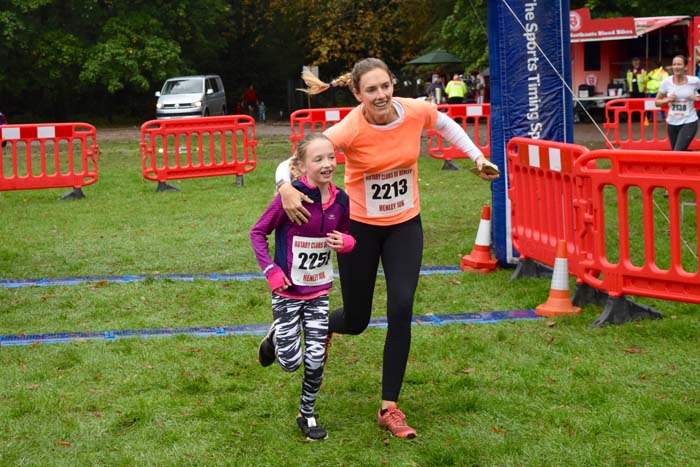 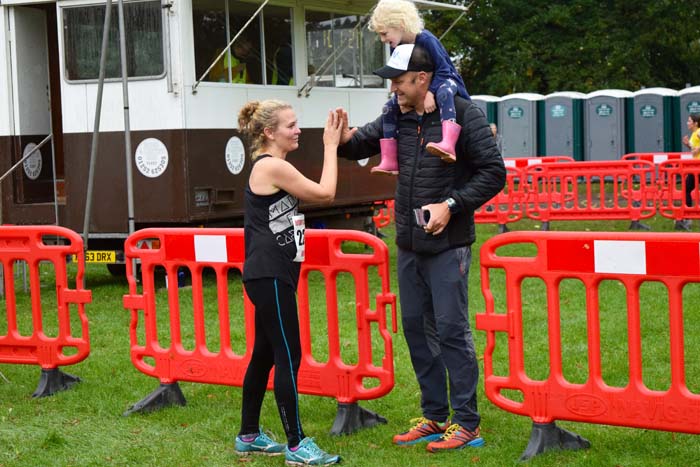 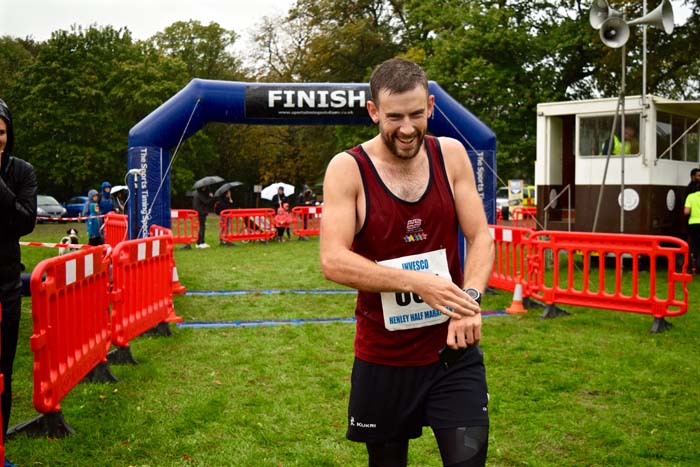 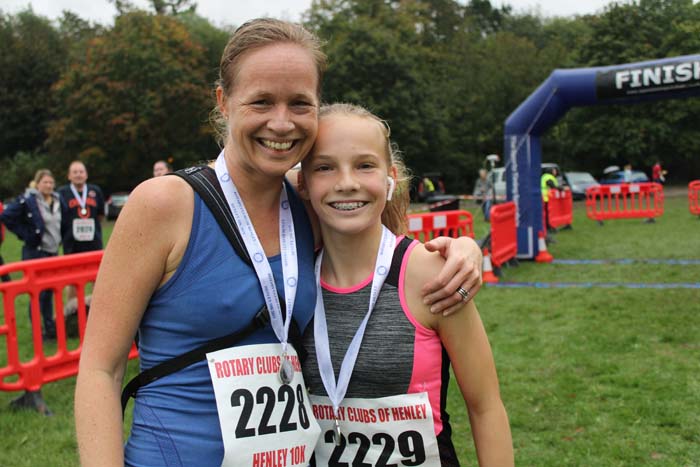 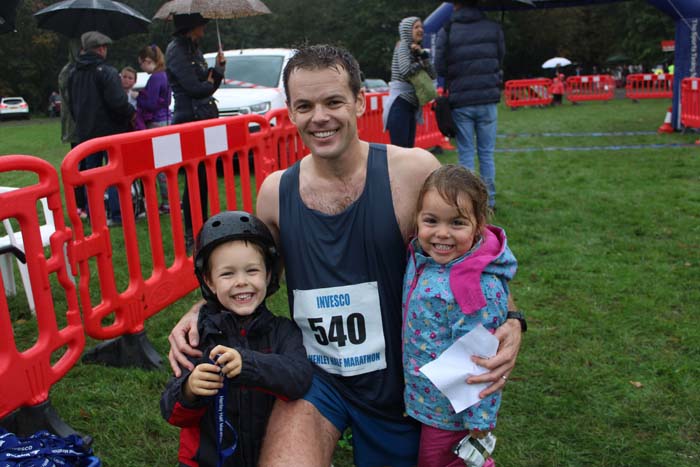 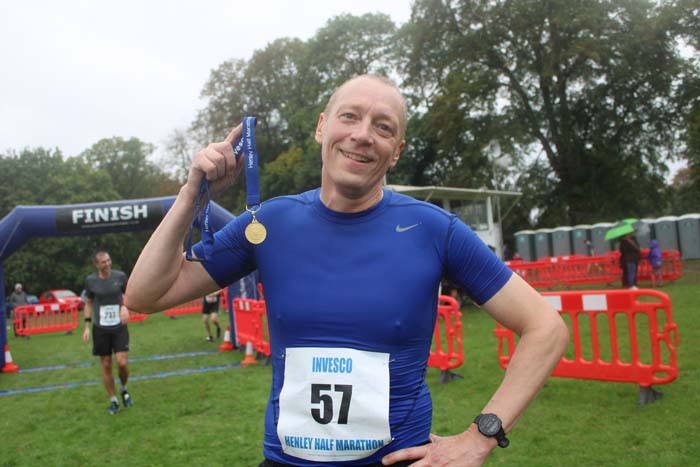 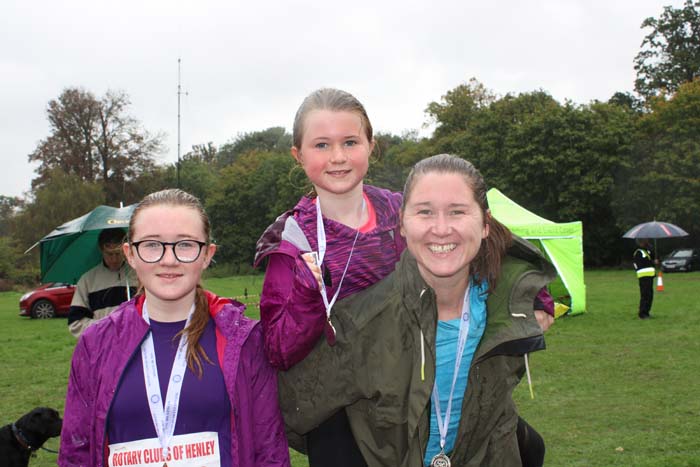 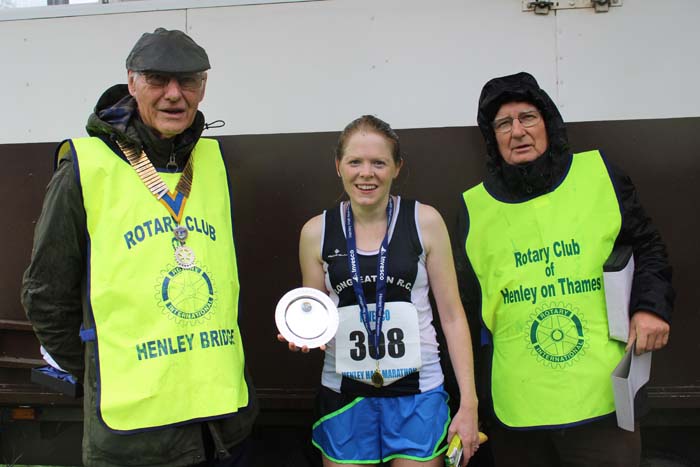 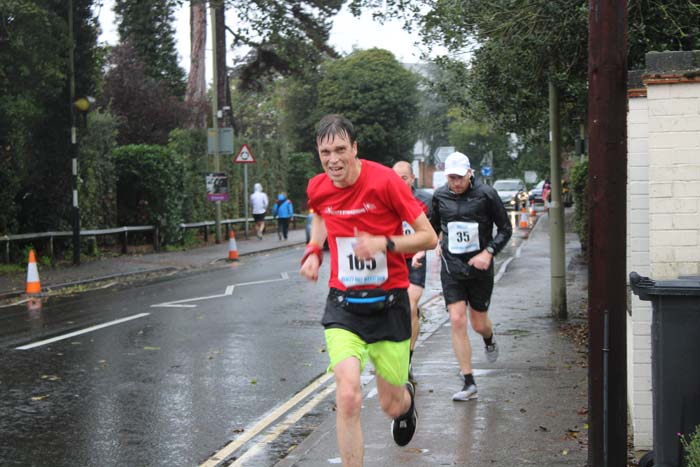 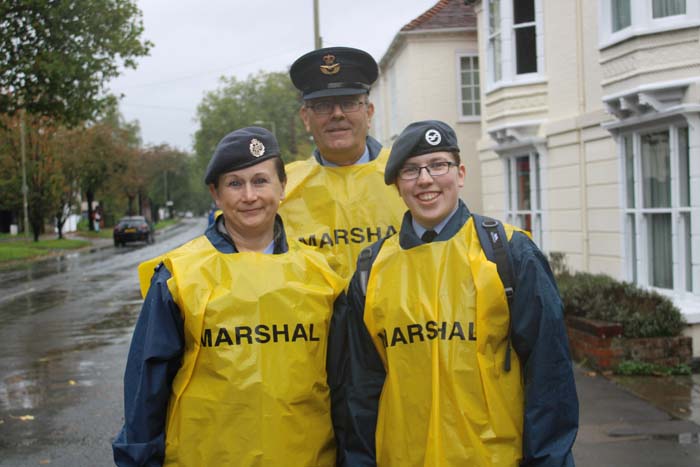 Local runners came away triumphant, and more than a little muddy, after Sunday’s challenging Henley Half Marathon & 10k. The competitors faced slippery conditions in the dismally rainy races, organised by the Henley Rotary Clubs and sponsored by Invesco Perpetual. Unperturbed by the puddles, hundreds of athletes of all ages hurtled their way around the hilly course, clocking up some speedy times for the event’s 37th year.

Henley man, Adam Wood, was first to cross the finish line in the Henley Half Marathon, securing his victory in a rapid time of 1:17:03. After collecting his medal and hugging his two excited children, Adam said, “Last year I was injured, the year before I came second and the year before that I came fourth. I’ve finally done it. No different training this year. I run every day to work from Paddington into the West End. I’m delighted to have won. The course was the worst by far that I have run it. From the island up to the town is quite exposed and there’s a head wind and then the same coming down the Fairmile and with the rain as well it has been very draining.”

Ellie Lunt scooped the title of Fastest Woman in the Half with her 1:30:23 finishing time. The Nottingham resident was running the course with her boyfriend, and took the win despite having never run the course before. “It’s the first time I’ve run Henley and the first time I’ve won a half marathon,” she said. Ellie has previously taken part in about 10 half marathons. She expressed, “The hardest bit was the hill. It was fine underfoot and I like hill running so tarmac is a bit of change.”

Sunday was a lucky day for Adams; 16 year old Henley-Tri athlete, Adam Hunt, was the champion of the 10k in a swift time of 39:59. Adam is no stranger to the course, having run it in 2015, 2016 and 2017, and positioned 11th, 3rd and 1st respectively. After a break last year, where instead he raced the Henley Half, Adam reflected on his second Henley 10k win. He disclosed, “It was hard. Up the hills I started to get a stitch but I pushed on. Down the hill was quite slippery but it was a good race.” He continued, “Once you get to the Fairmile you know there’s quite a way to go; it’s just straight, but you get people going past and cars cheering you on which is quite good.” Adam has been a member of Tri-Henley for five years, and considers running his strongest of the three triathlon sports. He said, “I did Henley 10k run the first year and I just liked it. It was a local event that I come back to every year.”

Adam was chased across the line by fellow Henley local, Oli Mahony, who came in second in the 10k with a time of 40:44. Having been convinced to enter by his wife, Sarah (who also ran, finishing in 01:03:49), Oli said, “I’m local. I like to do running at lunch time and in my spare times so I thought I’d do the local race.” Speaking about the notoriously hilly course, he revealed, “The challenge for me is just to get to the hill in one piece, to get to the top of the hill, and then it’s downhill all the way. I thought that geezer in front was going to blow up but he didn’t — he just kept on getting further away. I was hoping by the time I got to the top of the hill I might be next to him but he just pulled away. It’s a weird one because you have to work very hard and the first two thirds is all about hills, so you just cruise to be honest. I was just cruising trying not to work myself too hard. And then you get to the Fairmile and it’s just a bit of a slog. The wind was in your face.” Despite the troublesome hills and dreary weather, Oli enjoyed taking part in the local race. “It’s nice to run in the area you know,” he said. “It’s picturesque. Considering we’ve run in the dreary rain, if you go up that hill around Icehouse Lane it’s just beautiful. Beautiful location and it’s nice to have it on your doorstep. We’re lucky.”

Alison Bird was crowned the fastest woman in the 10k with her time of 46:41, placing 11th in the race overall. Spectators were tremendously impressed by 10 year old Conal, the fastest Junior in the 10k. With a time of 53:10, the schoolboy from St Mary’s finished 33rd in the rankings after racing with his family friend, Barnaby Cole. Conal said, “I’m really pleased with my time. It was a lot quicker than I was aiming for. I run a Parkrun sometimes on a Saturday but not much. I did the course on Wednesday and it was better this time, I think.” Conal usually spends his time playing football, but would like to take part in the Henley 10k again next year.

A number of participants on Sunday chose to run in aid of charities, making a positive impact on more than just their fitness. In addition, the money raised by entrance fees will go towards a number of local charities, including the SERV OBN Blood Bikes. Operating in Oxfordshire, Buckinghamshire, Berkshire and Northamptonshire, the volunteer-run organisation supports NHS hospitals by transporting blood in times of need. In addition, the service delivers human milk to neonatal units, helping to give premature babies their best start in life. The service is predominantly carried out using a fleet of motorbikes, which the Rotary Club recently added to by buying a new bike. Malcolm, a volunteer with the charity, said, “We work totally as volunteers. All the equipment, bikes, fuel, everything else is all down to donations from people like the Rotary Club – they’ve just bought us a nice BMW. We’ve got 15 bikes on the road and 4 cars. They do need replacing on occasion because they do get a lot of abuse and a lot of use! Every few years we need to replace them, which is where the Rotary Club come up trumps for us.” He continued, “Events like this are how we get ourselves known because not many people know what we’re doing, or where we are. We need events such as this to wave the flag and get the donations in, and perhaps pick up some volunteers if we’re lucky.”

Annie Lathaen of the Rotary Club of Henley Bridge was impressed with the bravery of the runners in the face of the unpleasant conditions. “The weather on Sunday was very wet with mud and leaves making running quite a challenge, but our intrepid entrants rose to the challenge and most entrants completed their chosen race,” she said. “We would like to thank Invesco who are the sponsor of the Half Marathon and are a really helpful and committed company to work with.”

Annie also thanked the numerous Henley businesses and Town Council for their support, as well as Henley Royal Regatta, the Fawley Court estate, the Rugby Club and the Borlase family for allowing the use of their land and premises. Last but not least, Annie concluded, “We would also like to thank the runners and their friends and families who make it a great event on the day.  The local police who helped particularly at the difficult marshalling areas, the cadets who were smart and despite the weather, were always cheerful and encouraging the runners and last but not least Raynet who enabled us to communicate around the course.”

To view the full results for the Henley Half Marathon & 10k, click here.