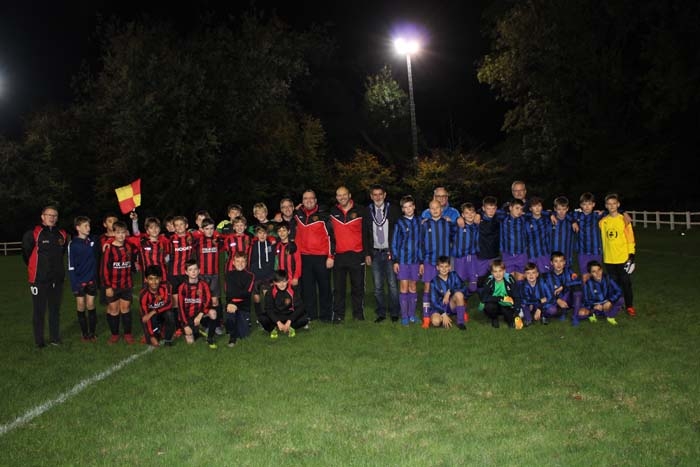 In a tradition dating back 36 years to 1983 an U13 side made up of players from AFC Henley took on Henley’s German twin town side, SC Leichlingen for the Dukes Shield under the floodlights of Henley Town on Friday night.

The German side had arrived on Thursday night and had spent Friday in London on a sightseeing tour that included Buckingham Palace and a tour of the Emirates Stadium of Arsenal.

The Shield was held by the side from SC Leichlingen as the German team had won last year’s encounter at the Triangle ground and early scouting reports from around the ground suggested that Henley would be in for another tough night.

The game started evenly with both sides looking to get an early foothold in the match. It was Tom Yeoman however that broke the deadlock with a stunning solo effort as he danced past 3 Leichlingen defenders before leaving the keeper with no chance.

Conor Quinn was next in on the action as a deadly accurate through ball from creative midfielder Tom Atkinson found him lurking at the far post and he smashed the ball into the roof of the net to make it 2-0 to the hosts.

Olly Saunders captained the side in the first half and gave an outstanding display of marshalling his troops with great aplomb as he swept up everything that breeched the Hurricanes’ defence. Fellow central defender Louis Catlin was also a man mountain at the back and his booming clearances helped to get Henley on the offensive.

Full backs Vibhu Venkateswaran and Matthew Dipenaar gave the Leichlingen wingers no room for manoeuvre and their persistent and courageous tackling meant that the Germans were largely forced to taking shots from distance.

Any shots that did get through were dealt with admirably by first half keeper Ben Horner whose accurate handling and shrewd distribution provided a real rock in what was the host’s last line of defence.

George Acock and Lucas Shaffner were proving real handfuls on the wings and their pace was causing serious trouble for the visiting defence and they went close to adding to the scoreline on a number of occasions.

Just before half time Alec Steel, who was proving to be a very effective number 9, played an intricate one two with Yeoman and Steel calmly slotted the ball underneath the keeper to make it 3-0 going into half time.

The half time interval saw whole scale changes for both sides and the second half was to prove tighter than the first.

Ben Palmer now in the home goal had to be at his best to keep out a low free kick and the Germans were well on top in the early exchanges.

The new centre back pairing of Joe Winpenney and Mikey Dowling had to be resolute in their tackling and they made a number of key interventions to stop Leichlingen getting back into the game.

Henry Steel, playing left back, was up against a very pacey German right winger but he would not be beaten and made sure that the threat from that side of the pitch was nullified. At right back Raph Baber was also having an outstanding game as his tenacity and hard work was also blunting the visitors’ chance to attack.

However, there was nothing the back 4 could do to stop Leichlingen get back in the game as after a series of goalmouth melees the ball was eventually forced in to make it 3-1.

Leichlingen were now playing with a real resolve and physicality as they strove to get back into the game.

This prompted an immediate response from Henley though and it was midfield dynamo Ethan Holliday who rose to the challenge. He went on a mazy run and hit a great shot that was only just wide. This gave Henley the belief they needed at a crucial stage of the match and accompanied in the middle of the park by Joe Turner they ensured that the Henley ship was steadied.

Leo Schlaefli was having the game of his life down the left wing as his twists and turns led the opposition defence a merry dance and accompanied with his ability to track back he was proving to be a real thorn in Leichlingen’s side.

Taro Finch was also proving to be a real handful down the right for Henley and he almost added to the scoreline with a great run into the box only to see his shot well saved.

The crucial fourth goal soon came though for the hosts as the industrious Joe Turner played a through ball to Henley’s second half number 9, Tom Bonser. Bonser used all his trickery to create space for himself and release Morgen Wynn-Jones down the left. Wynn-Jones then used his electrifying pace to speed past the German defence before calmly slotting the ball past the helpless visiting keeper to make it 4-1 and secure the Dukes Shield for Henley.

AFC Henley chairman Trevor Howell presented the Shield to the Henley captain, Oliver Saunders after the game and spoke in both immaculate German (and English) congratulating both sides on the spirit in which the game was played and what a pleasure it was to host the players and families from Leichlingen. Deputy Mayor, David Eggleton, also presented medals commemorating the match to all the players.

On Saturday morning two more games took place with the Henley Hurricanes winning their match whilst the SC Leichlingen second eleven won the other. On Saturday afternoon a delegation from AFC Henley and all the German squad went to watch Reading v Preston at the Madjeski. In what had been a pretty dull affair the match come to life in the 97th minute when Reading scored the winning goal and they celebrated by jumping into the crowd to join the Leichlingen and Henley boys!

On Saturday night all the Leichlingen and Henley families and players came together at Henley cricket club for an evening to celebrate their stay and to award the Cups and man of match awards for the Saturday challenge matches.

Mike Turner, the U13 AFC Henley year group head, concluded the night by speaking about the bonds that had been made and the enjoyment that all the boys had got out of the experience and how much the Henley squad were looking forward to the return trip next Easter. 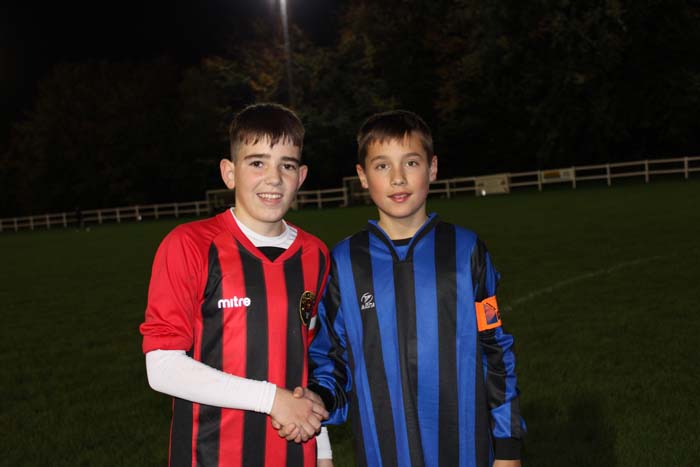