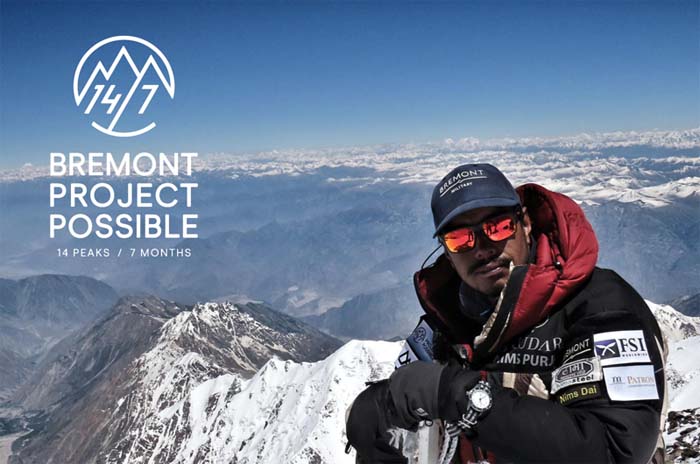 Earth’s 14 tallest mountains, all higher than 8,000m, enter the ‘death zone’ which is so-called because human life cannot exist there. This did not deter Nims, who joins a list of just 40 climbers to have completed what could be considered the ultimate mountaineering goal.

“I believed in this project and I made sure to surround myself with people who believed in it too. This was never just about me, which is the reason I’ve been able to overcome some huge obstacles on this journey. By achieving this goal I knew I could inspire people from all generations, across the world. I hope to have shown that anything is possible when you set your mind to it,” added Nims.

Bremont Co-Founder, Nick English, comments, “When I first met Nims through our military connections, at the time an unknown mountaineer who was setting out to challenge the potential of human endurance, he struck us as someone wholly determined and uniquely placed to achieve such a phenomenal feat. We’re incredibly proud to have been involved in Bremont Project Possible since the beginning and to have seen the interest in the expedition grow in the way that it has, with the world watching Nims summit mountain after mountain, has been awe-inspiring. Nims is a total inspiration and it goes without saying that what he has achieved is utterly remarkable. Never has a mechanical watch been quite so well-travelled in such a short period of time! Our watches have a history of being tested to their limits in extreme environments and this is absolutely testament to their durability and reliability.”

Nims began Bremont Project Possible when he reached the top of Annapurna on 23rd April this year and has accomplished this extreme feat of mountaineering with a rotating support team made up of exclusively Nepalese climbers.

The clock stopped on Nims’ attempt as he reached the summit of Shishpangma on 29th October at 8:58 hrs local time (00:58 GMT) beating the world record by 7 years 5 months and 8 days. Nims’ incredible achievement consisted of 14 summits in 189 days.

As well as smashing his overall goal of scaling all 14 of the world’s 8,000m peaks in under 7 months, Nims has achieved a further six world records in the process: