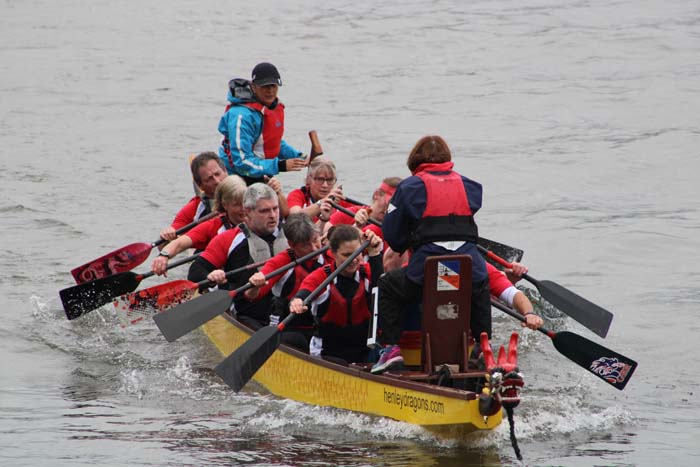 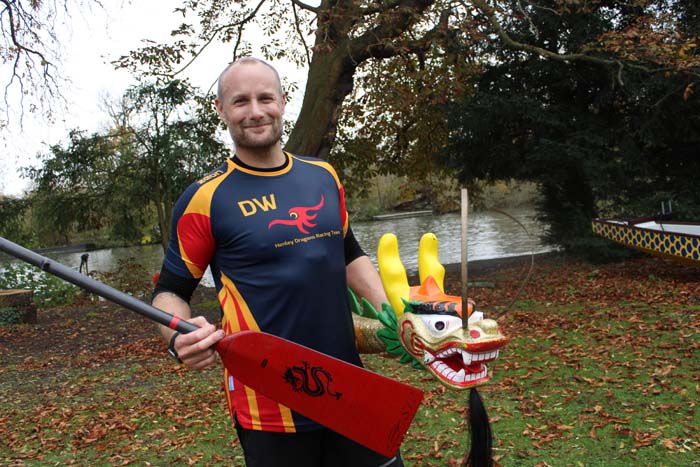 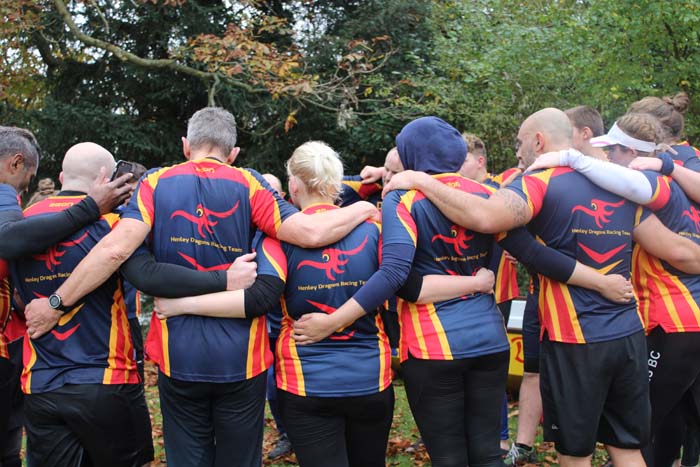 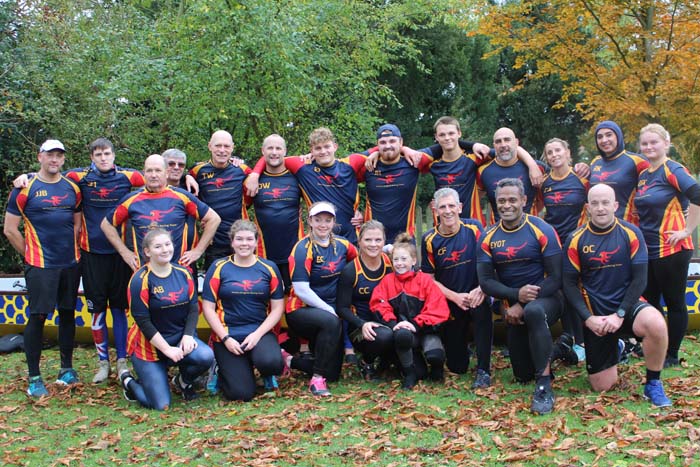 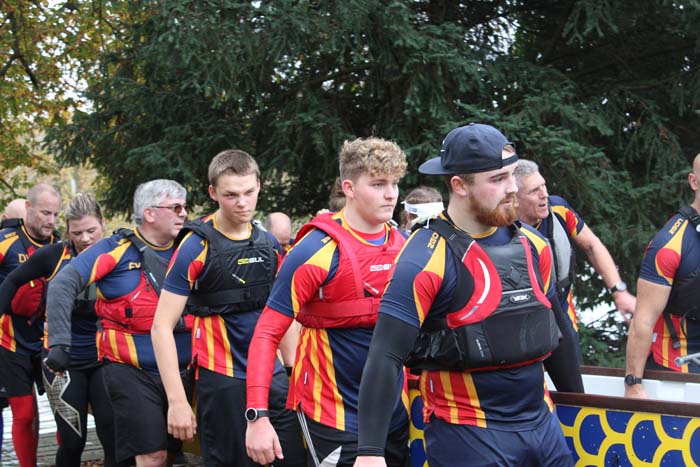 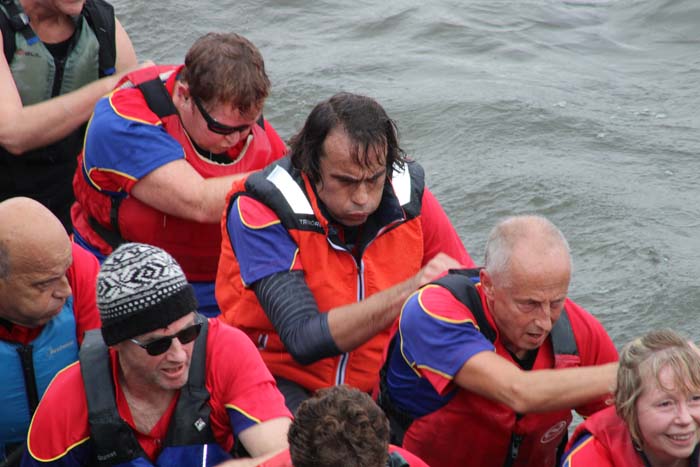 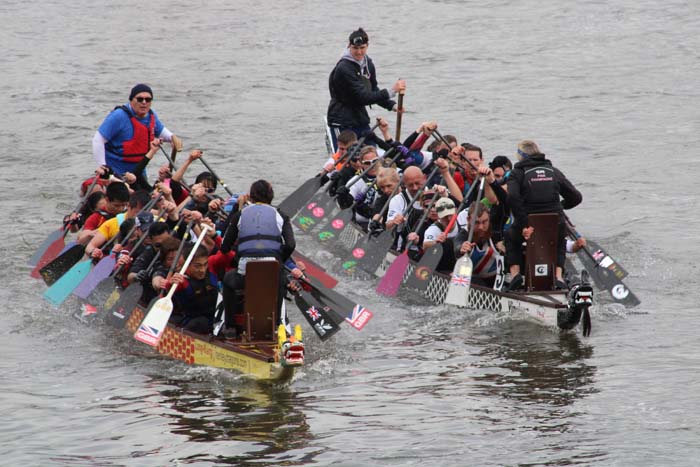 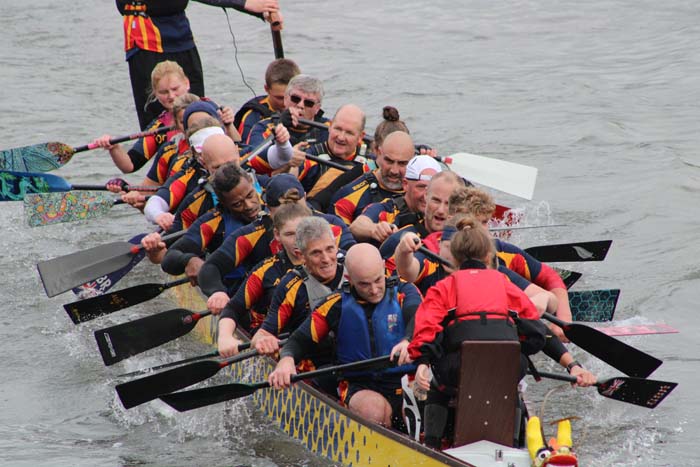 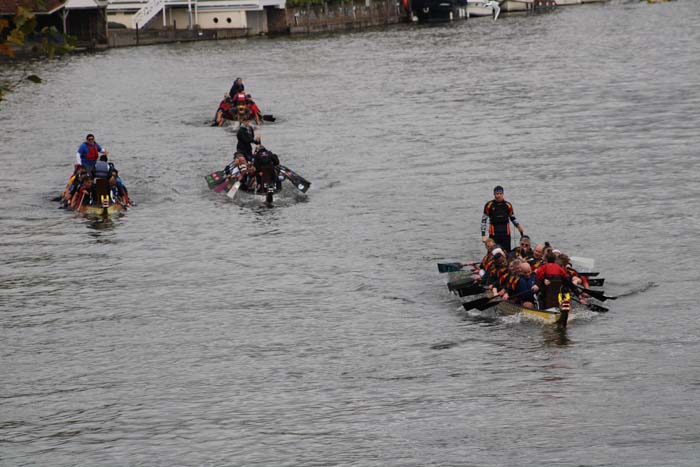 The beats of drums could be heard on the Henley reach on the River Thames on Sunday morning in the first of Henley Winter series of dragon boat which was closely contested.

Adorned with pride following Henley Dragons being crowned as National Champions in Nottingham in September, Henley Dragons hosted the first of the races from the Eyot Centre on the Wargrave Road.  The first event of the series had to be cancelled due to red boards indicating a fast flowing river, so Henley and competing teams were very keen to get back on the water and race.  Henley Dragons conducted research over the Summer to ascertain whether crews were looking for more of a challenge or a change in distance, but following feedback, Henley decided to keep the popular 7.5km format.

Crews from all over the country including Bristol and Exeter were to gather at the top Island near Marsh lock for the 10:30am start.  Eight dragon boats and two outrigger canoes.  Crews were let off 30 seconds apart around the two turns 7.5km race. Crews started off downstream, under Henley bridge, turning around Temple Island, back under the bridge and up around the top island finishing at the Eyot Centre.

Henley Dragons were drawn to start off sixth behind Secklow 100 and ahead of Wraysbury and Rafters.  Henley started off strongly, building up speed and settling into a strong pace.  The Henley crew, equip with freshers to the Winter Series, battled downstream keeping ahead of Wraysbury and Rafters up to the Temple Island turn.  Henley could see ahead of them, crews three a-breast as they careered towards the turn. Rafters passed Henley shortly before the end of the Island, with Wraysbury following in behind.  Wraysbury had an advantage over Henley on the turn.  Henley tucked in behind Wraysbury in their slipstream as they all battled upstream.  Henley followed Wraysbury past Execalibre 10 man crew, Bristol, and also London Warriors and Pershore who were battling it out.  Henley had to push on through to create clear water between themselves and the crews battling it out behind.  Henley could not keep pace with Wraysbury, as they pushed on in the pursuit of Rafters.  Henley managed to finish in fourth place in a time of 34:54, Secklow 100 in 33:49, Wraysbury Dragons 33:45 and Rafters winning in a time of 31:14.  The outrigger canoes had their own racing with the Paddlesports mixed crew finishing in 37:32 and Paddlesports men in 39:32. It was a challenging race, with lots of lessons being learnt along the way.

Damon White from Henley Dragons, “I took up the sport 4 months, after being nabbed in the gym by one of the paddlers who said come down.  Years ago I used to row and I miss the river a bit.  It’s good fun.  The hardest thing to learn has been the speed – everything is so quick.  I’ve had to up my fitness too and learn how to paddle as part of a team.  It’s the first time I’ve competed in the winter series.  The conditions were really good – the water was perfect.  The reality was of doing something in training and then racing it.  I think we hit it a bit hard in the beginning and had to slog back up the river.”

Henley Dragons now look forward to the second race of the series which is due to be held on the 24 November 2019 at 10:30am.

Cat Cassell from Henley Dragons added, “It is a spectacle for visitors to Henley to see the racing dragon boats along our stretch of the Thames.  We’d encourage and invite supporters to come down to the club to savour the atmosphere and encourage our own Henley team around the course.  We have a fabulous team working hard providing hot beverages and an array of hot food and cakes, which we’d encourage supporters to come along and experience.  It’s a hard working local team who compete all across the country, giving national teams good challenging racing. Henley are a team to watch!!”