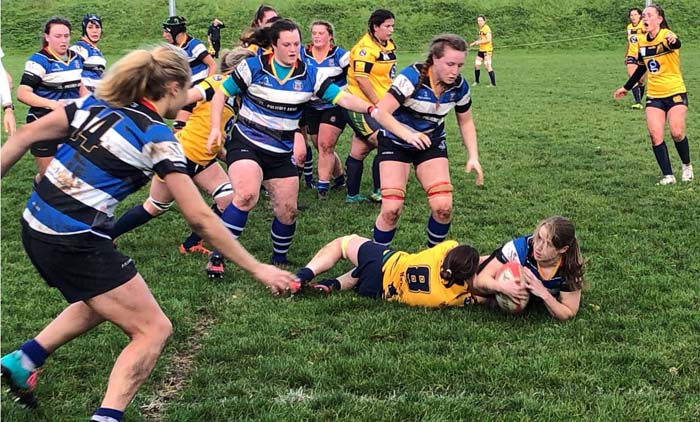 Having had a disappointing start to the season Henley were determined to come out of the block firing and started strongly. With robust carries from Yas Matthews and Caroline Robinson, Henley pushed Bath back into their half.  Unfortunately, a turn in play saw Bath score a drop goal of the back of a scrum to go 3-0 up.

From the restart Henley struggled to retain possession and were made to battle against Baths strong running lines and threatening backs. Gen Moody made a cracking last-minute try saving tackle and the next phase was then held up by Chloe Baker.  Unfortunately following the 5m scrum Bath scored and it was converted taking the score to 10-0.  A quick line out from Baker threw the backs out to the wing, allowing Moody to cover some serious ground (60m to be precise) before Bath gave away a penalty.  Mia McCreesh went for the posts to make the score 10-3.

Bath had a good spell of possession and scored two tries before half time to take the score to 24-3.

Henley came back fighting in the second half with substitute Jemma Tripp making a great run down the wing but was tackled short of the line.  Henley had some great attacking play with Shira Kilgallon, Baker and Matthews linking up well, with some cheeky offloading and speedy line breaks.  Following continuous offences around the break down from Bath, their prop received a team yellow towards the end of the game.  Henley capitalised on the miss-match and slick hands through the backs saw Nina Webb tackled over the line.

Player’s Player – Chloe Baker. Chloe went forward and closed down space in defence. In particular applying great pressure to her opposite number. In attack she identified space very well, initiating attacks down the blindside regularly and trying to create and convert overlaps. She was a constant threat.

Coaches’ Player – Shira Kilgallon. Shira, on debut for the Hawks, communicated loudly, clearly and effectively, bossing her forward pack in to position in attack. She identified space well and particularly in the second half, allowed Henley to apply serious pressure to Bath. This eventually told when Kilgallon released the back line to allow Nina Webb to score.

“The most complete performance of the season and the second time this season that we have finished stronger than the opposition. Winning the second half 0 – 5, showed great character and resolve. Defensively the best half of rugby that we have played all season, so credit must go to the players for this. And in attack we also showed great improvement. Building pressure and then converting.

Ultimately though we gave the opposition a lead. We got a foothold in to the game and created huge pressure in attack only to then lose the ball in contact, to knock on or to misplace a pass. All that pressure and momentum is then given away by our own errors. This cost us a losing bonus point.

We will work hard, we will go back to the drawing board this week and we will be better for this learning experience. We will focus on the positives and look to iron out those errors which are killing our momentum, in two weeks time, against Trojans at Dry Leas.”