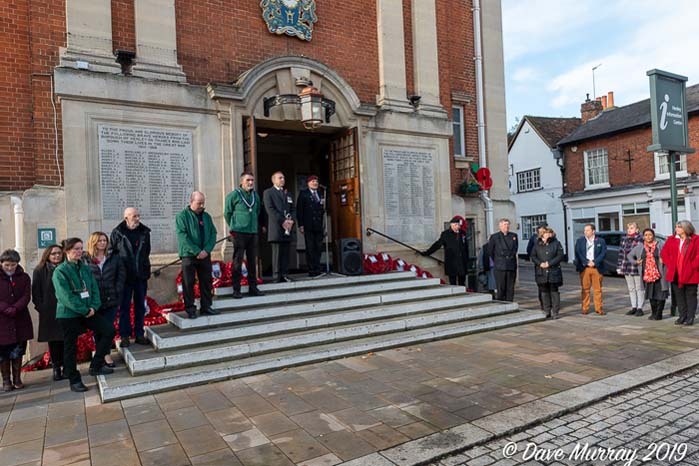 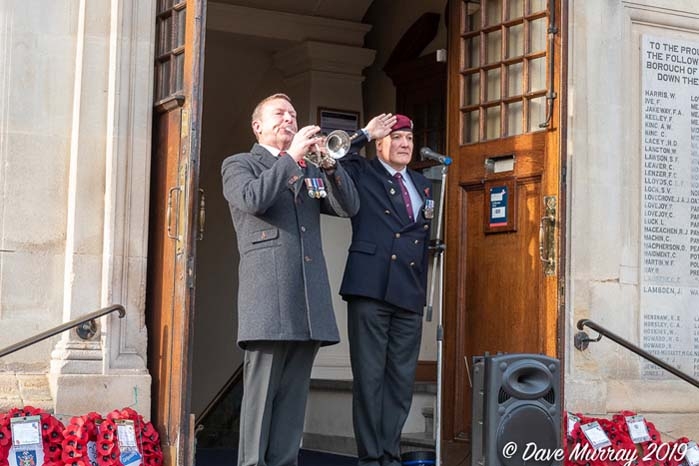 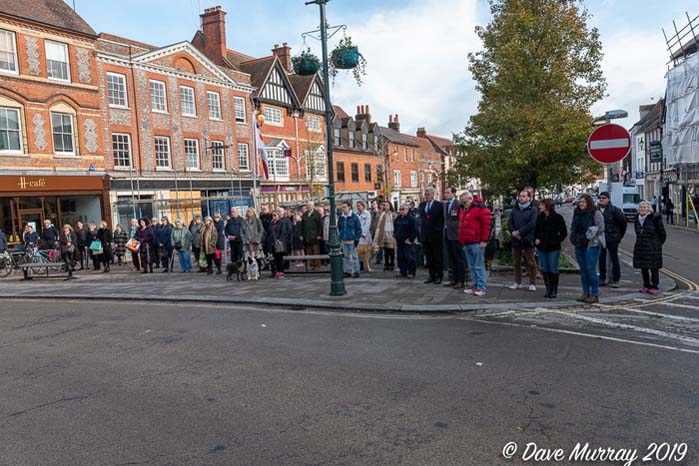 On the 11th day, of the 11th month and on the 11th hour, people showed their respect in Market Place yesterday when a short service was conducted and led by Carlo Sisi of the Royal British Legion and The Last Post was played by Stuart Henderson from Reading. 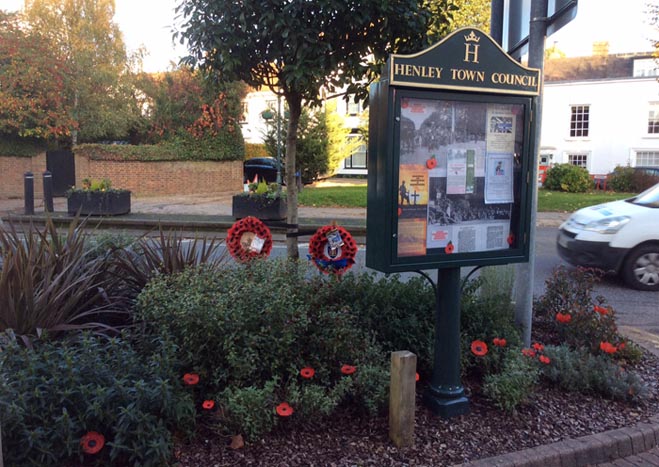 At Northfield End, resident Helen Gaynor added two wreaths and some upcycled poppies from last year’s Valley Road School remembrance display on the refurbished green where a Photinia Red Robin, with its symbolic red leaf tree was planted last year to mark the WW1 100th anniversary armistice.  One wreath was in honour PC Andrew Harper who died on duty whilst responding to a burglary earlier this year and the other was for the The 2nd Battalion of the Oxford & Bucks Light Infantry whose troops were captured in a photo in 1913 gathered at Northfield End.  Helen said, “The photo and story about the Oxon & Bucks Light Infantry 2nd Battalion has been put up in the new noticeboard.  It was quite a spectacle when the troops came through the town back then.  We would also love some more upcycled poppies for next year, if anyone wants to make some more.” 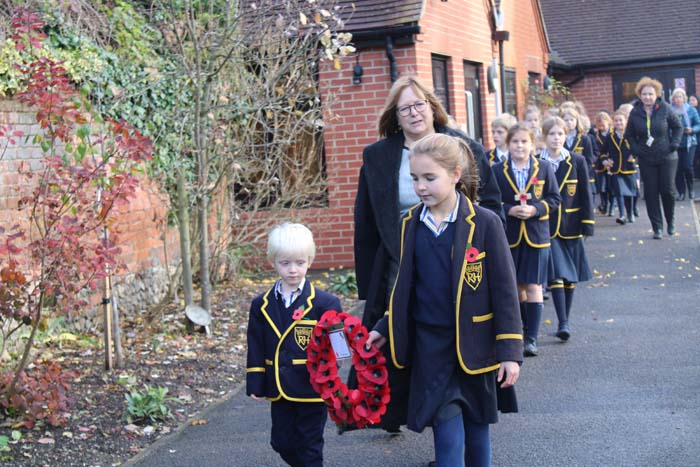 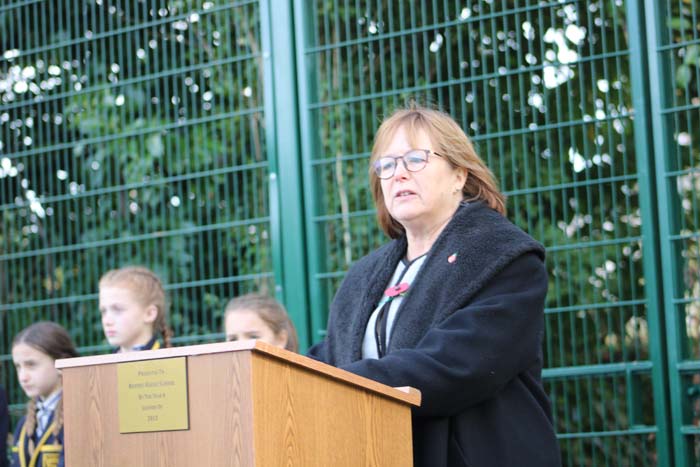 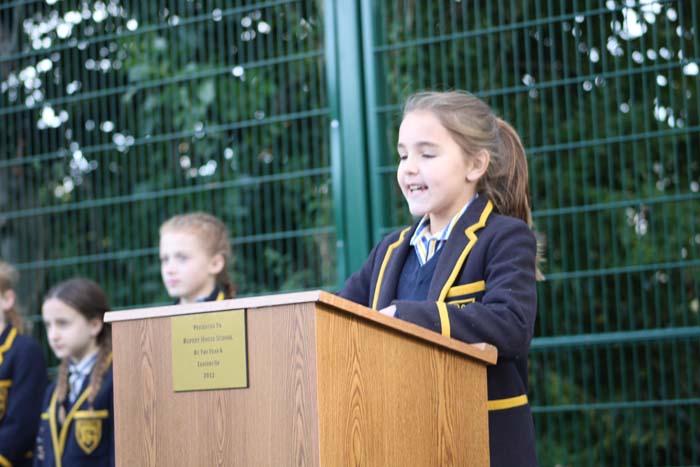 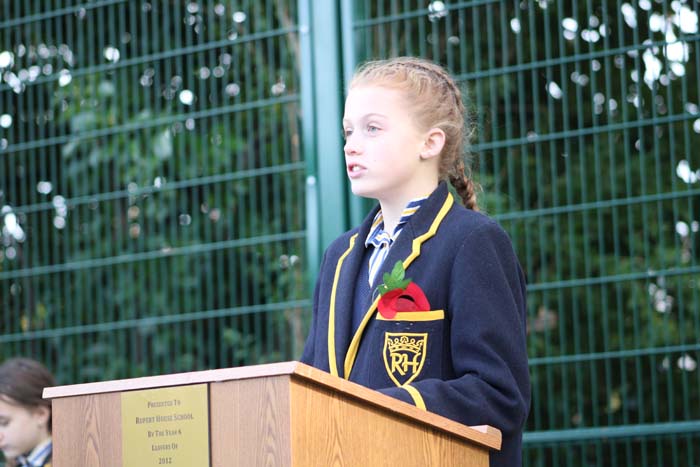 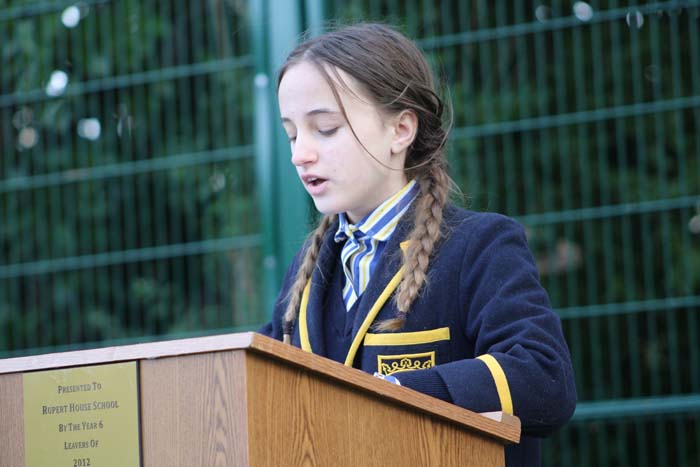 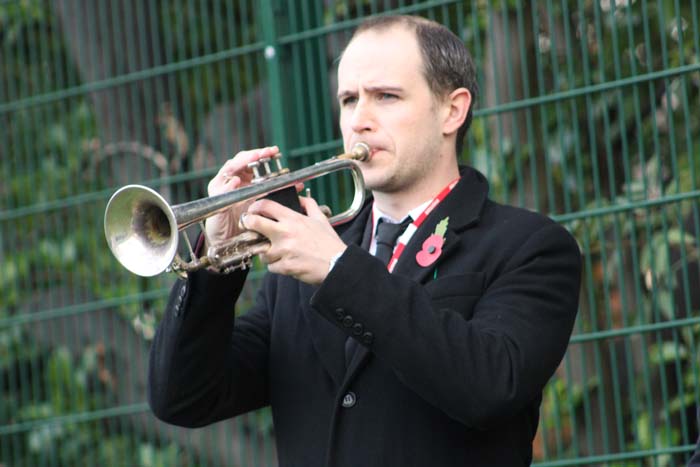 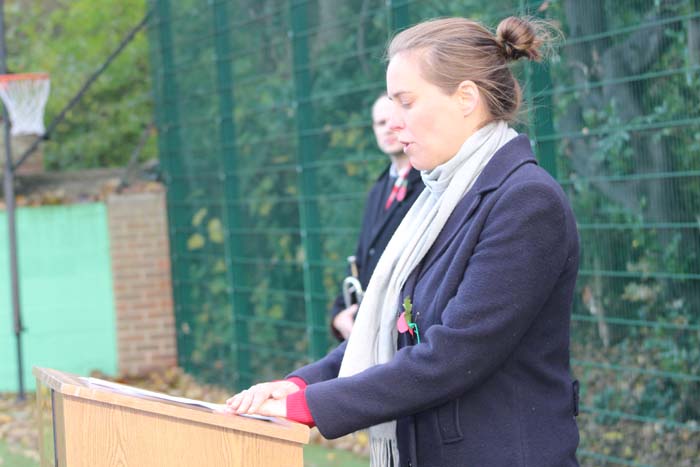 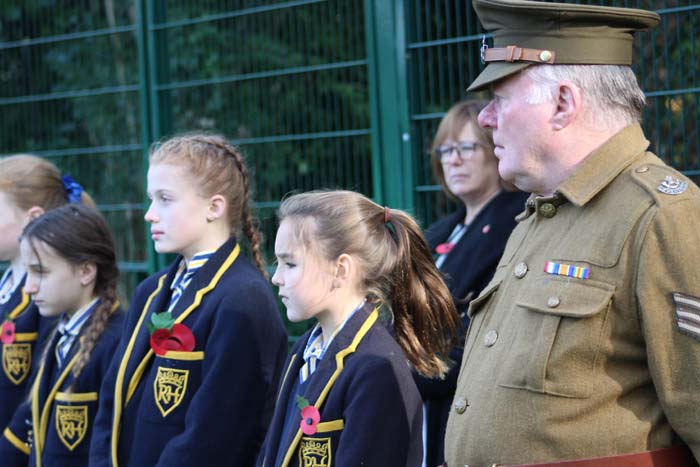 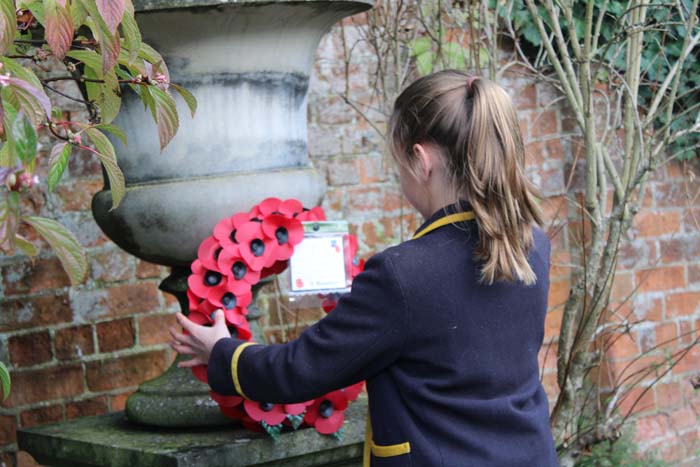 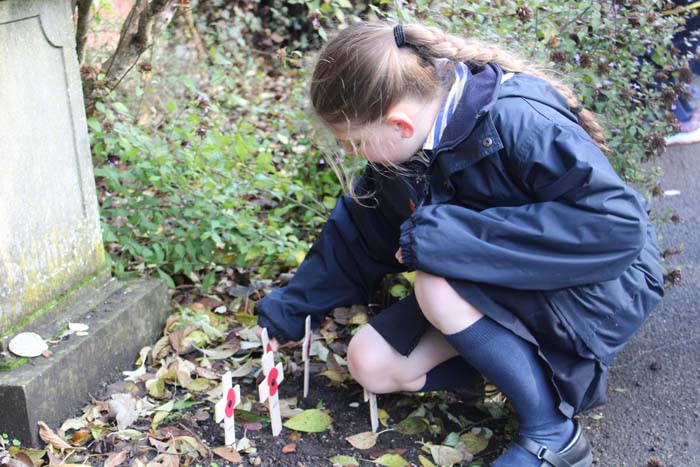 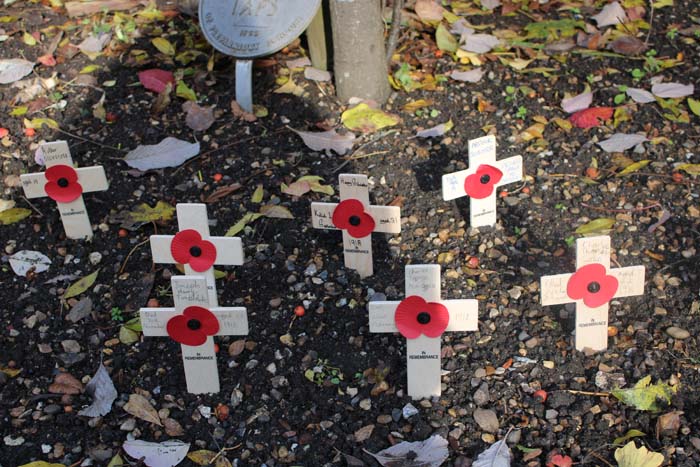 Rupert House School marked Armistice Day with their own school service and invited Mike Willoughby from the Henley Lest We Forget project to attend.

Lola was then joined by youngest pupil Charlie Tonks, aged 4 to carry the wreath and to start the procession up to the old urn in the garden where the wreath was laid.  Pupils from Year 2 upwards then placed a cross into the flower bed beneath the urn.  Afterwards Charlie said, “I was excited when I found out I was chosen and it was a special thing to do and my Mummy and Daddy were here to watch me.”

Headteacher Clare said, “We feel that our traditional Act of Remembrance is an important learning experience for our children, as well as honouring those who made the ultimate sacrifice for our freedom.   It is important that children learn to respect and honour service men and women and to think of others before themselves.  Over the years, they gradually gain an understanding, at a level appropriate to their age, of the horrors of war and the importance of peace.  Our Rupert House Values are Courage, Creativity, Respect and Resilience.  At least three of those values are directly relevant to the Act of Remembrance.  The children behaved impeccably this morning and the staff and parents were extremely proud of them.”

Mike Willoughby said, “It’s a privilege to be here again.  It is the children that we are relying on to continue this act of remembrance and these young children obviously fully understand what is going on.  I just said to the teacher that the joyous thing is the kids are full of questions.  It’s absolutely brilliant.  Afterwards one of the classes had a spare period so I ended up doing a 40 minute question and answer session. What a great way to spend a part of Remembrance Day.” 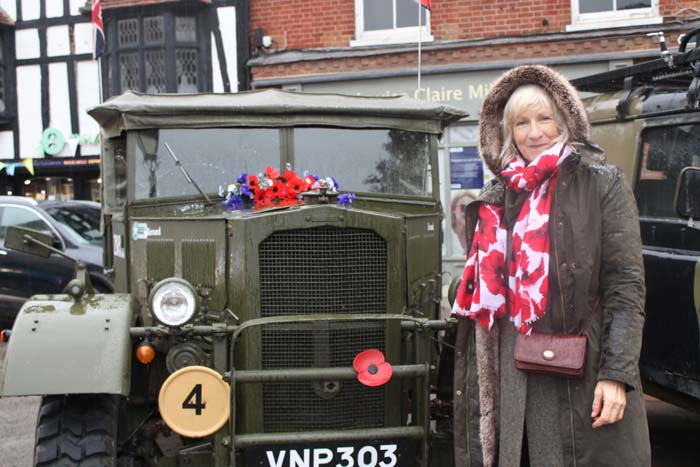 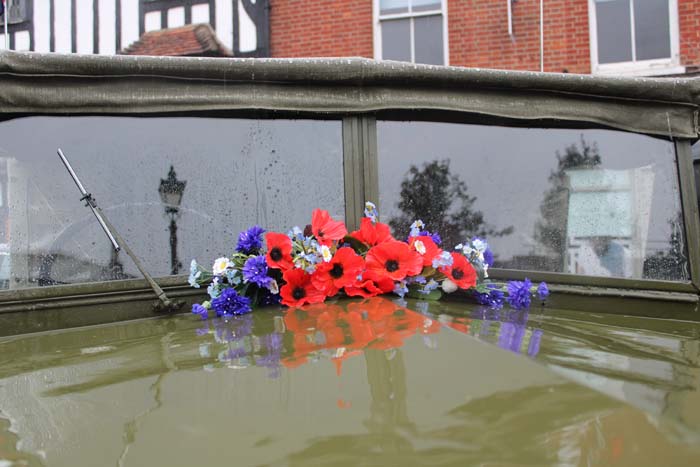 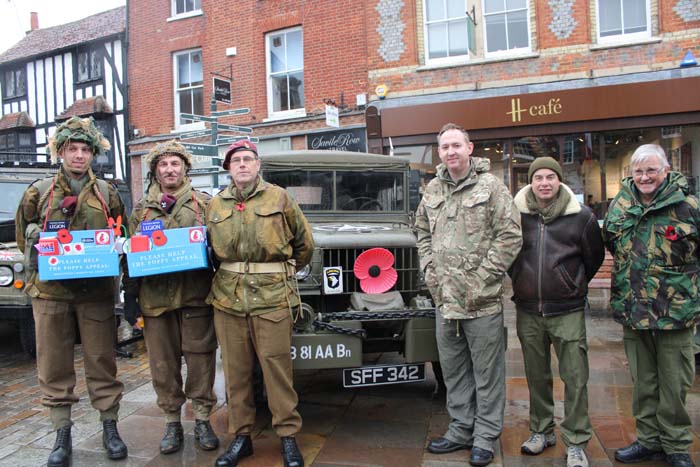 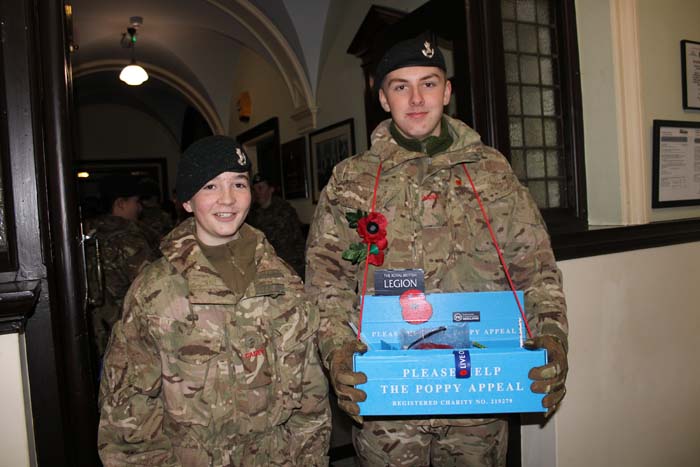 On Saturday, members of The Berks and Oxon Area Military Vehicle Trust braved the awful rainy weather for the fourth year in a row to display 12 of their old military vehicles on Market Place.  Dave who had travelled the furthest from Oxford said, “I’ve brought my Landrover 101 which I’ve had for 6 years for the second year to Henley.  I’ve been a member of the Trust since 1987 and a joined because I am an ex-service from the Royal Artillery.  Marion Venners’ Humber from 1941 was the oldest vehicle on display which her and her husband have had for 40 years.  Marion said, “My husband has had an interest/hobby in restoring old vehicles since he was 16.  We found out that this vehicle was converted to a fire tender after the war.  We have also taken it to Normandy to  mark D-Day for several years.” 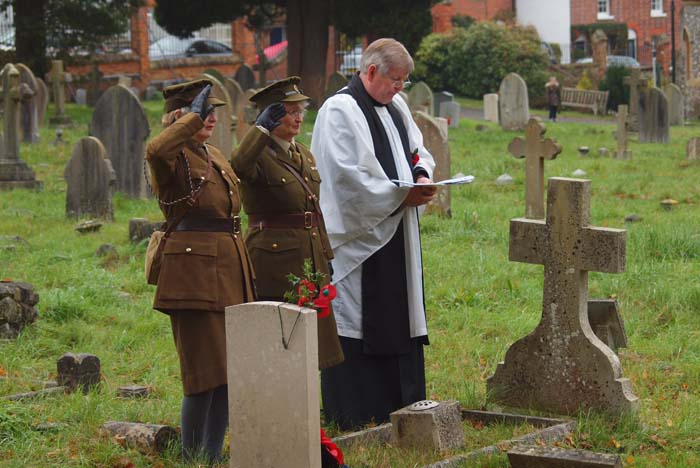 Charles grew up in Henley, the 3rd of 7 children to George and  Kate Lewington who lived in South Hill gardens – believed to be the Greys Rd area. Charles worked with a local grocers before joining the army to serve in WW1. He served with the 9th and 15th Battalions of the London regiment through the Great War and was awarded a Military Medal (MM) for his bravery. He returned home, married Jeanne Louise and settled in Bayswater.

During the second World War  he joined the Home Guard and it was on a training exercise that he and four colleagues were killed in Richmond Park on 17th May 1942, aged 49. His grave has a Commonwealth War Grave headstone.

The Home Guard Living History group is seeking to honour all members of the Home Guard throughout Oxfordshire who lost their lives in the service of this country.

Does he have any relatives still living in the area? The group would love to hear from them and involve them next year in a similar tribute. 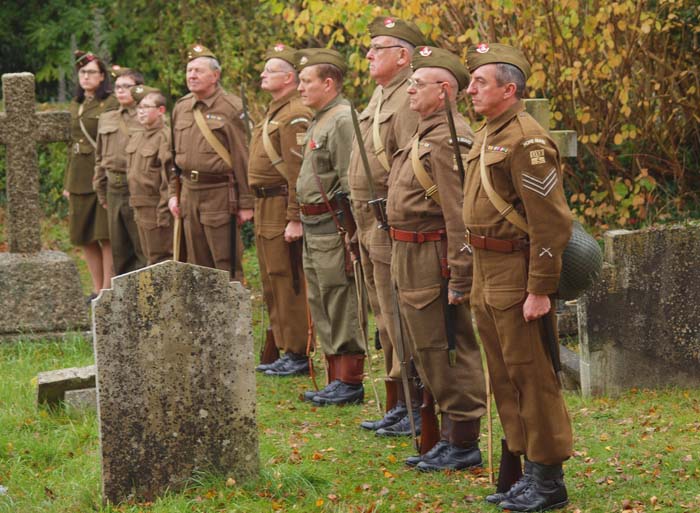