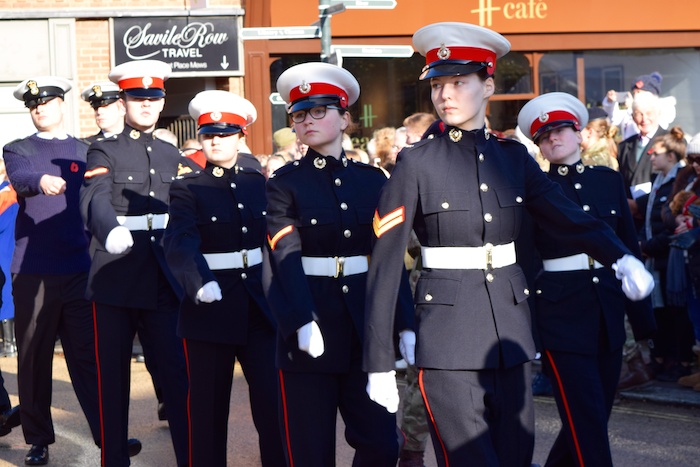 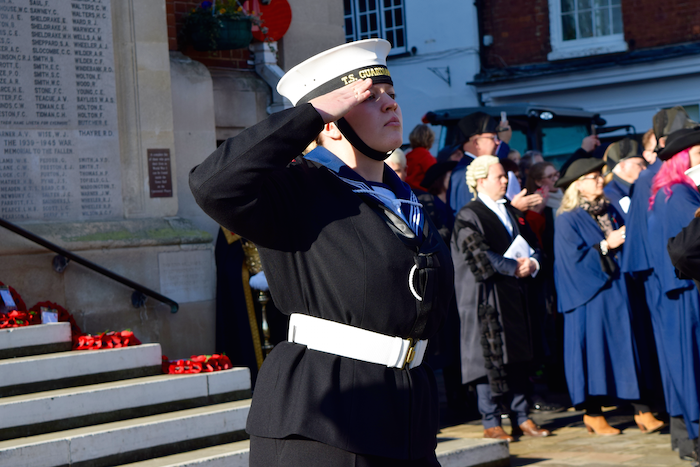 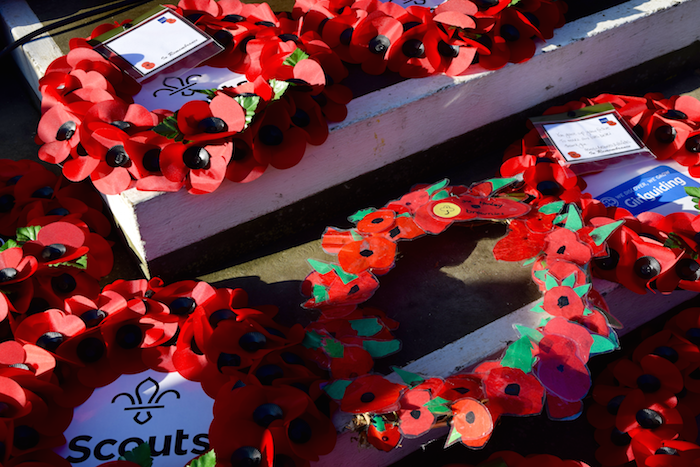 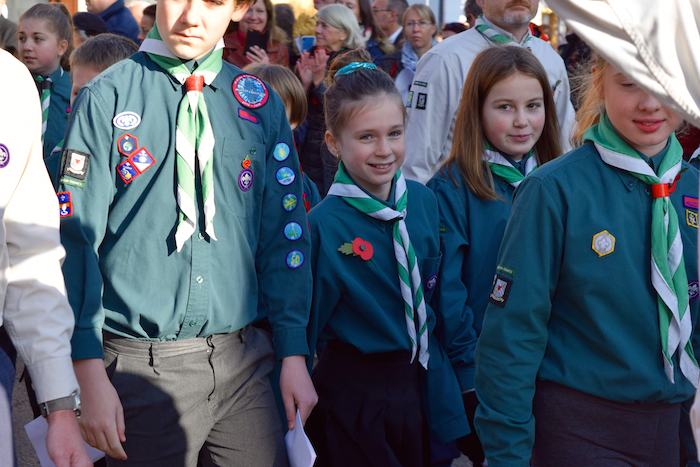 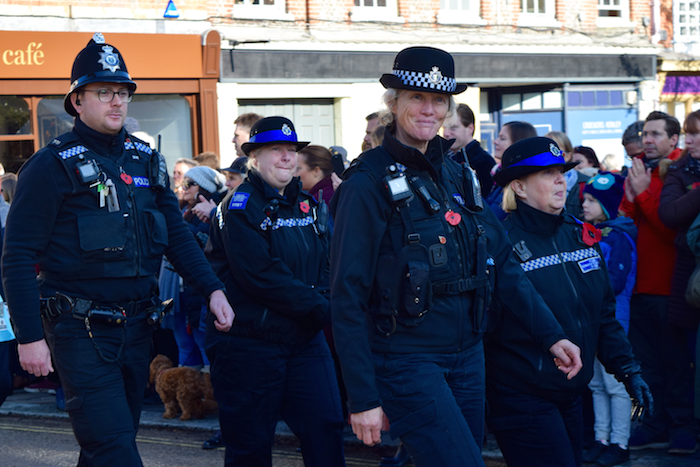 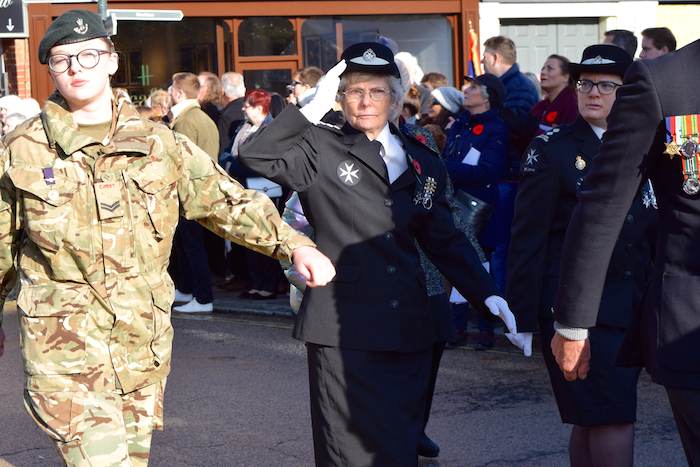 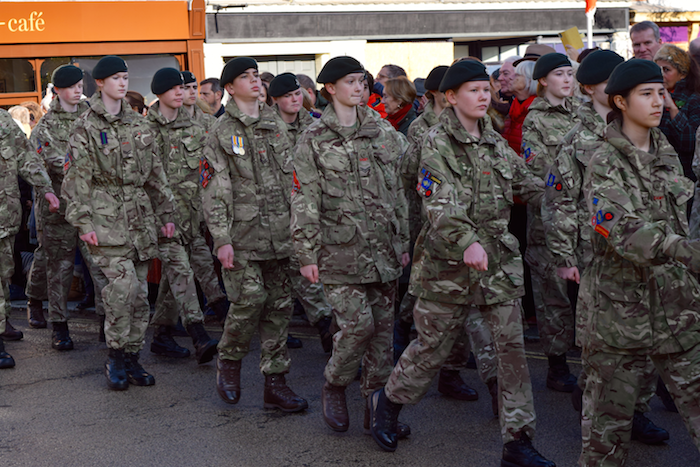 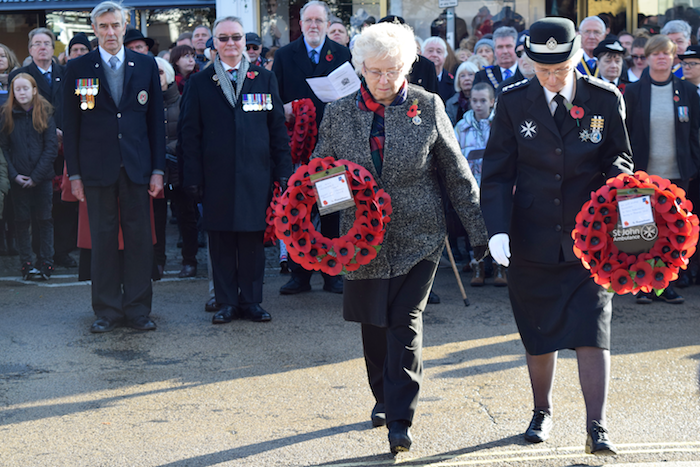 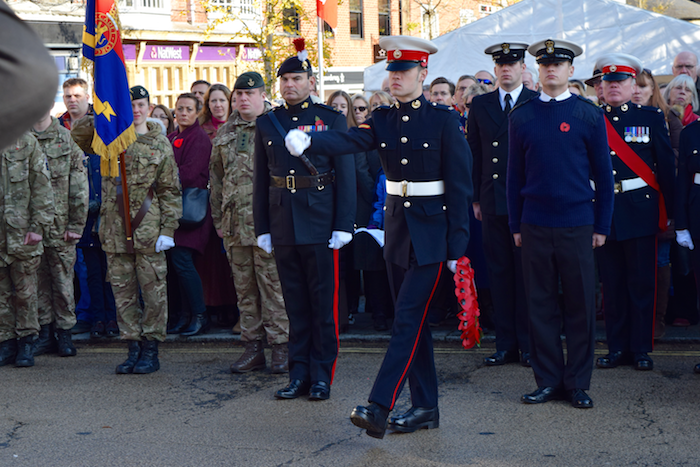 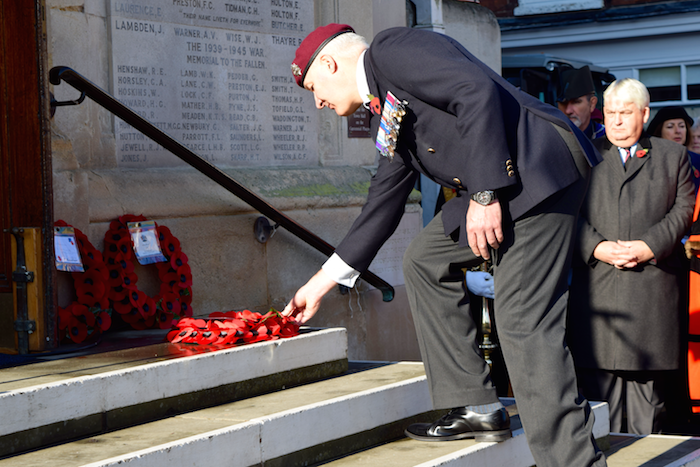 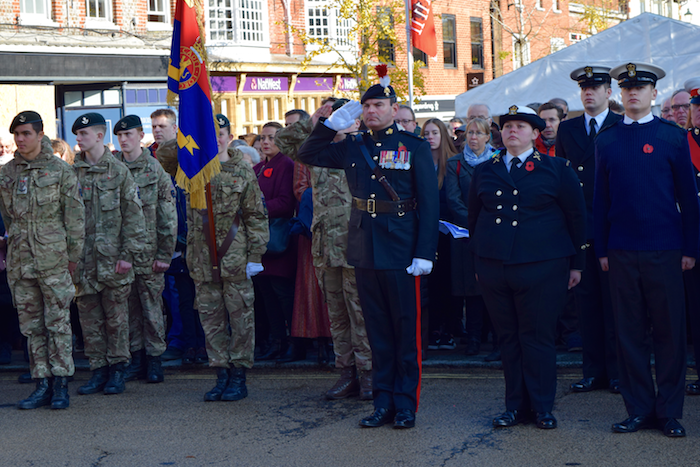 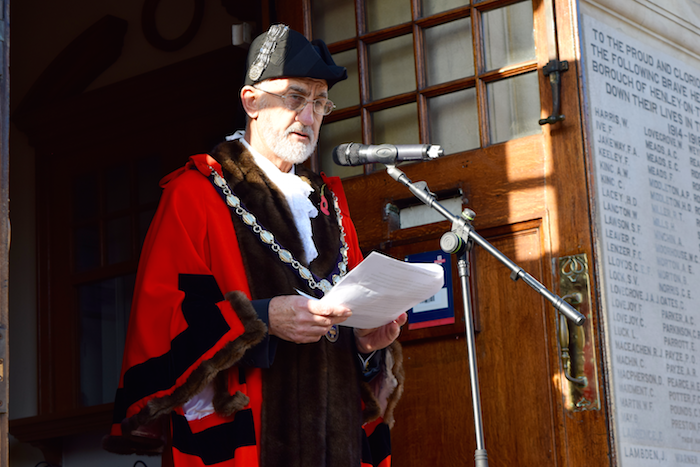 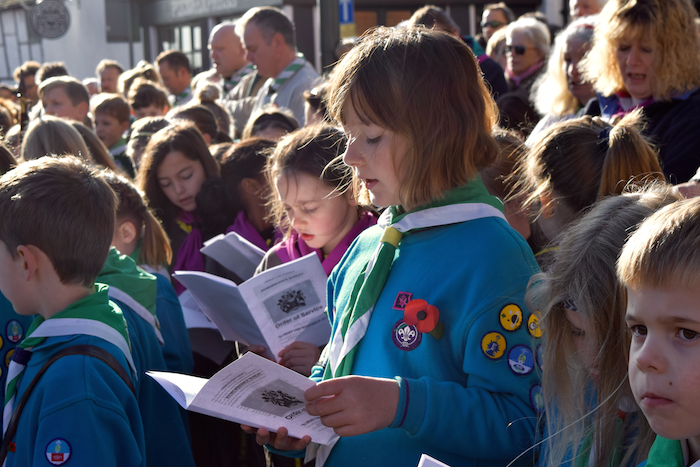 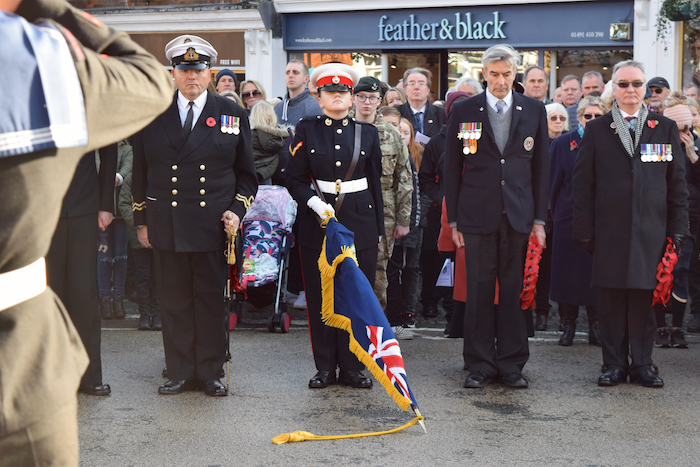 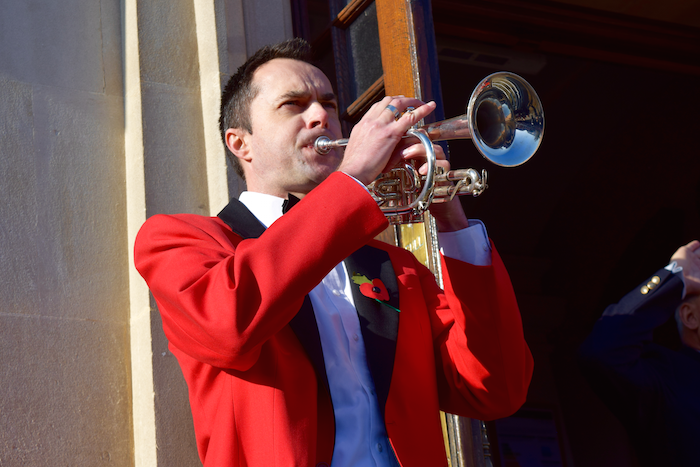 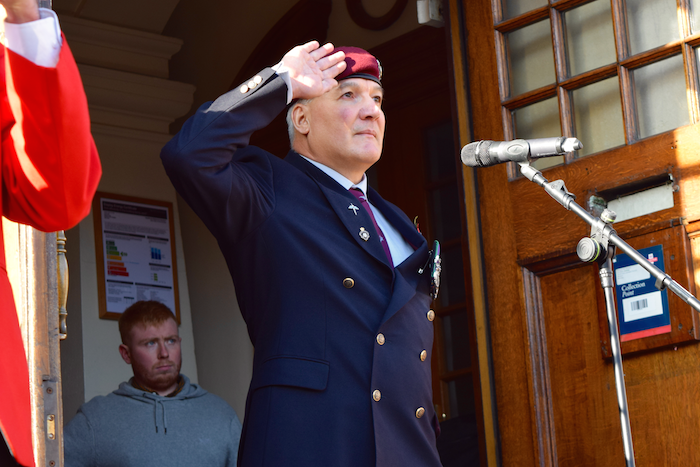 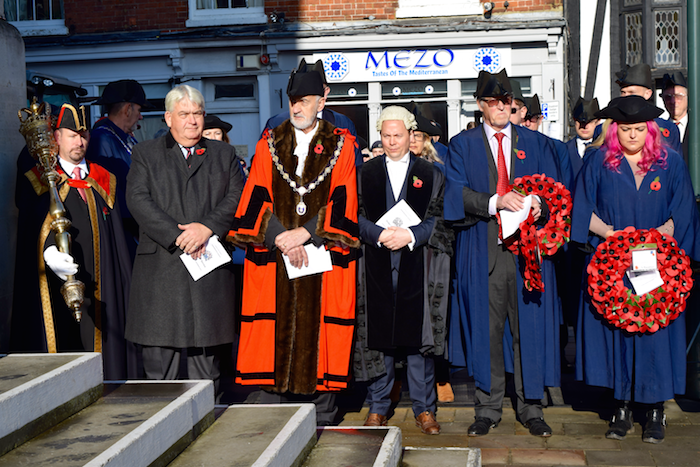 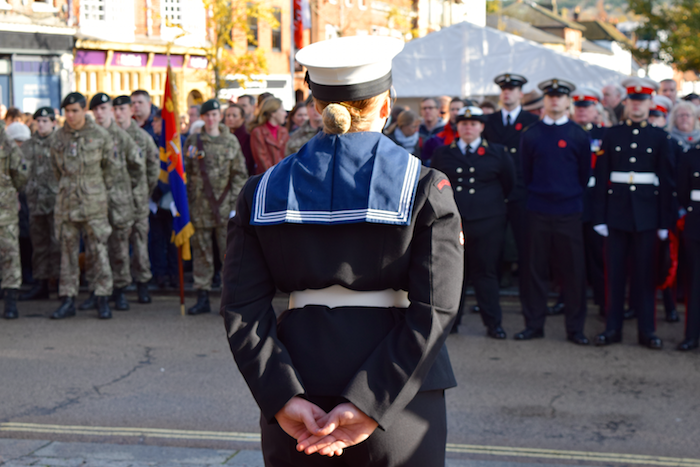 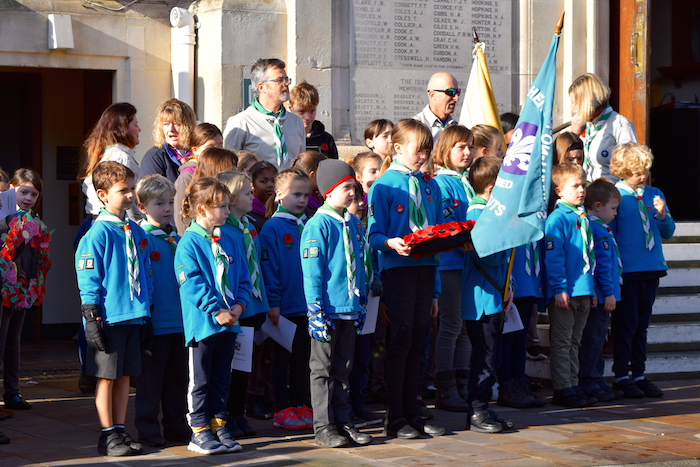 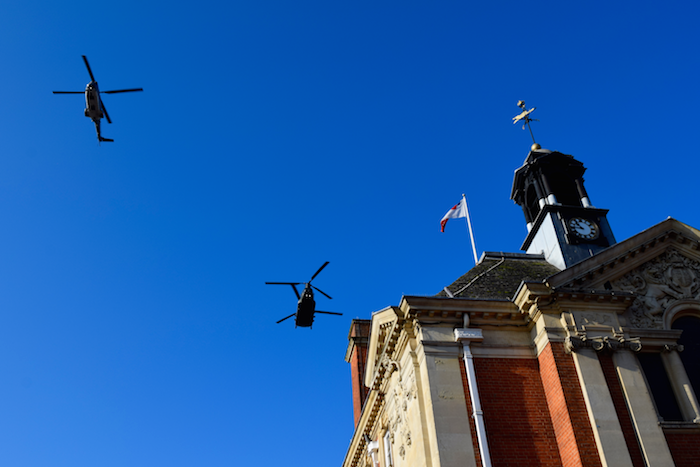 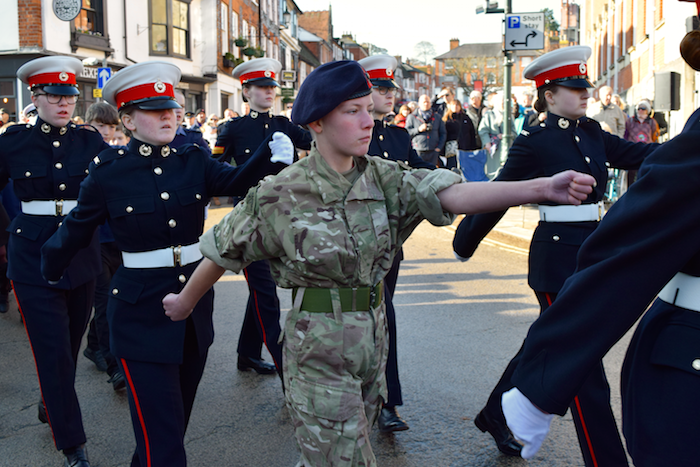 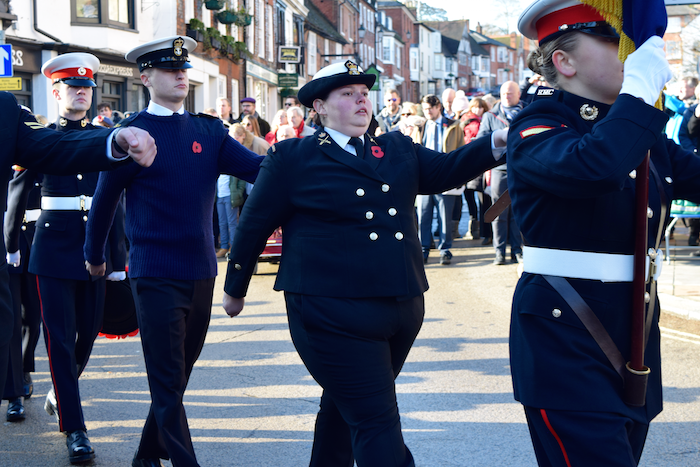 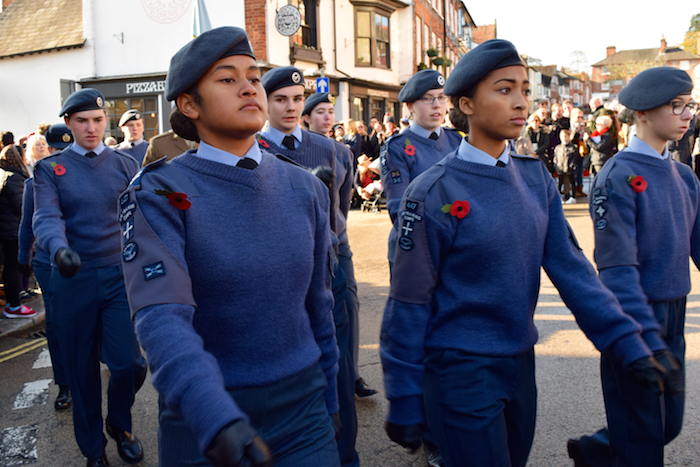 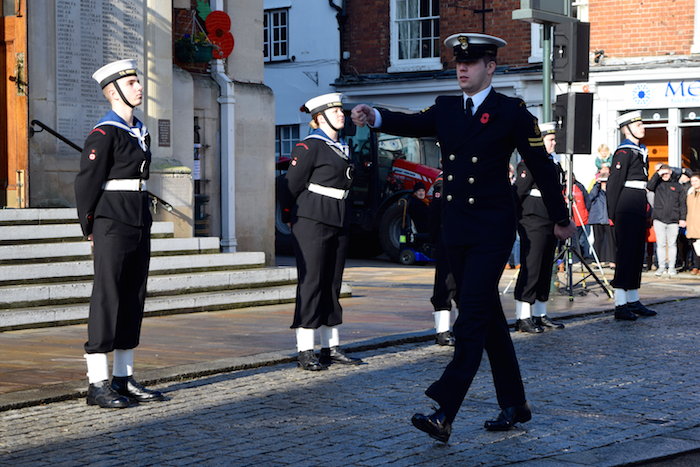 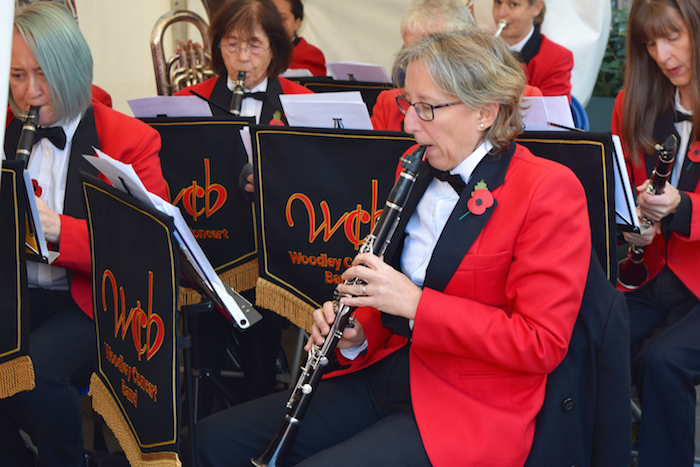 Henley came to a halt on Sunday morning as hundreds of people paused to honour the soldiers who sacrificed their lives for their country. The Remembrance Sunday service, held on the Town Hall steps, was attended by veterans, servicemen, civic dignitaries, members of the Royal British Legion, local armed forces and reserves units, cadet forces, and youth organisations including the Brownies, Scouts, Cubs and Guides, as well as the many members of the public who paid their respects to the fallen.

The service began with a flypast of a Chinook and a Puma helicopter from RAF Benson. The Mayor’s Chaplain, Reverend Jeremy Tayler of St Mary’s Church, followed with the Bidding, reminding those in attendance to pray for peace “for which so many have already laid down their lives, and for which so many continue to die, day by day. And we remember them before God with grief and pride and thanksgiving.”

Mr Carlo Sisi of the Royal British Legion read Robert Laurence Binyon’s poem, ‘For the Fallen’, before the Last Post was sounded at 11 o’clock and the community observed a two minute silence. The Reveille played, and Mr Sisi concluded the silence by reading John Maxwell Edmonds’ Kohima Epitaph:

“When you go home, Tell them of us and say,

For your tomorrow, We gave our today.”

In his address, Mayor Ken Arlett shared the heartrending story of his uncles, who fought and died in the Second World War. He said, “Being Henley born and bred myself, over the years I have spoken to a number of local soldiers that returned from the Second World War; I spoke to a few that saw two of my uncles killed on the outskirts of a small town named Tourney in Belgium.

“Gradually all the old soldiers are passing on, but we must never forget them. There is still one old soldier that I know who lives in Henley, and his name is Dick Charlton. Dick lives at Luker Avenue and was a member of the Oxon and Bucks 4th Battalion; he will be 100 years old next June. Dick was awarded the Henley Town Medal last year; this was not just for himself, but for all his comrades that fought in the Second World War. Dick was 18 years old when he went to war. Dick tells a wonderful story of playing football with my uncle Reg for Henley Town Football Club in 1937, he can almost remember the whole 90 minutes of the game. Unfortunately my uncle Reg never returned from the Second World War.”

Mayor Arlett continued, “28 years ago my hope was that conflicts would stop, this was in the era of the Gulf War; unfortunately there always seem to conflicts across the world, for one reason or another. In 2018 there were an estimated 13.6 million people displaced from their homes, this due to wars or conflicts. World leaders need to address these atrocities, and also the fanatics and dictators that cause them. Today is a day of Remembrance, a day to remember the fallen, and also the suffering of their families.”

Mr Arlett concluded by thanking the organisers, the organisations and people who attended, and by passing on an apology from Brigadier Malcolm Page, who usually reads ‘For The Fallen’ and the Kohima Epitaph.

Wreaths of poppies were laid on the Town Hall steps by veterans, members of local community groups and charities, civic dignitaries, and members of the public, before the service ended with the March Past. The numerous uniformed organisations in attendance paraded around Market Place to the applause of the crowd.

The poppy wreaths stand on the Town Hall steps beneath the names of Henley soldiers who fought and died in the two World Wars, commemorating the brave men and women throughout history who have given their lives for our freedom.

Over 60s Club Gets Glossy New Look Thanks to J Murphy & Sons Construct...
Scroll to top