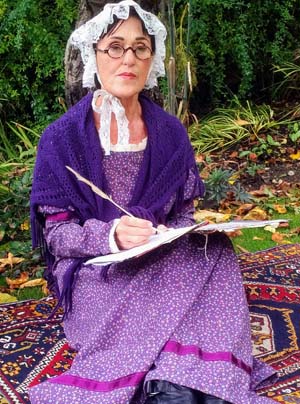 “It all started in the Old Fire Station Gallery with an experiment, Making a Mark – a little history of art with huge projections of great paintings accompanied by music and people seemed to like it, ” said Jill Richardson.

Encouraged by this modest success and a collection of £200 for The Chiltern Centre Jeux D’Exprit decided to move to the Kings Arm’s Barn for more space and where they have used the old building’s character, with a low ceiling and mature beams, to create the intriguing and magical shows in the dark.  The shows have included voices from local actors and specially chosen music including Bartok, Faure, George Crumb and, possibly your favourite, Patricia Barber singing Inch Worm?  The group has brought to life, in light and sound some of the greatest works of fiction – Blue Beard by Charles Perrault, Christina Rossetti’s Goblin Market with real goblins from Trinity School, M.R. James’ Room 13 (admit it, you were terrified too) and Edgar Allen Poe’s enigmatic Raven. Not to mention, why not, Steven Allender’s darling tale The Last Prince.

And along the way the shows have raised a total of over £4000 for the The Chiltern Centre.

This year the content will be different – the love story of William and Dorothy Wordsworth which is fact not fiction. William and Dorothy had a profound love for each other and for writing, the evidence is there in Dorothy’s Lakeland Journals and William’s poems. Jan Corby will read extracts from the Journals while Steffen Collings, Janice Stow, Janice Selkirk, Tim Green, Bethan Hodge and Brian Cheadle give voice to some of the eccentric characters the Wordsworths met on their daily walks in the Cumbrian hills. The whole show will be accompanied by original music composed and played by Angela Pengilley.

Once again, technical wizard, Bruce Smith will take up his magic cursor and weave music, words and paintings into an enchanting son et lumiere that is so characteristic of Jeux d’Esprit.

So come along on 22, 23 or 24 November to help us celebrate our fifth year in support of The Chiltern Centre with a glass of wine.

Admission is free but booking is essential