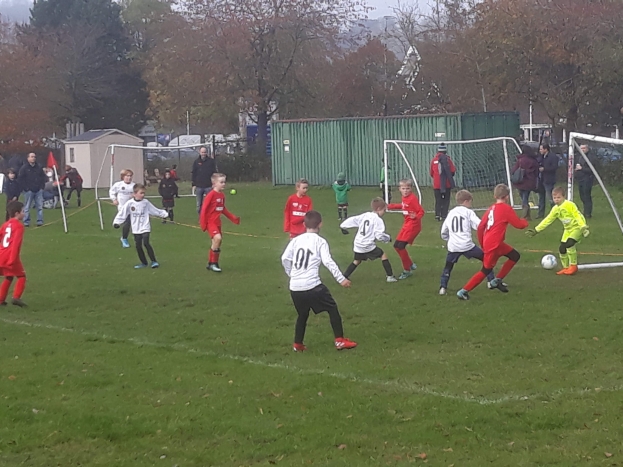 Henley Hurricanes U9s picked up their league campaign after a couple of weeks off with a fixture at Jubilee Park last Saturday against Binfield Pumas U9s. The Pumas wasted no time with an opening goal in the first minute from a rapid attack on the left wing. However, the Hurricanes were up to the challenge, and had equalised within two minutes through Nicholas Hernandez St Clair with a close range strike.

The Hurricanes increased their lead after a further two minutes, with Nicholas Hernandez St Clair again finding the target through a congested goalmouth.

After this frenetic start, the game found a rhythm with both teams striving to score, the attacking football lighting up an otherwise cold and murky morning. The Hurricanes were forced to get back to defend a number of times, and eventually the Pumas found a way through to equalise.

The second quarter followed the same pattern. Nicholas Hernandez St Clair was rewarded for perseverance in the box with a third goal. After this, the Hurricanes’ midfield started to gel, with Oscar Robinson showing typical determination and Jake Thatcher growing in confidence too. Despite this, the next goal was scored by the Pumas after a moment of defensive uncertainty proved costly for the Hurricanes.

The second half started with the scores level, and the teams continued to be evenly matched, with both teams showing their physical side at times. Clear scoring opportunities were at a premium, but the Hurricanes grew in confidence and settled into a rhythm whilst the Pumas were always dangerous, showing their teeth on the counterattack.

In the final quarter, the complexion of the game changed. A flowing move from Jack Callaway in midfield allowed Luca Currie to slot home to break the deadlock. The Hurricanes found a new confidence towards the end of the game, with man of the match Jack Tookey solid in defence and fellow defender Dominic Ellis making a last-gasp tackle to keep the Hurricanes in the game. In the final moments, as the Pumas strove for an equaliser, a powerful strike from Will Goulden gave the Hurricanes a fifth goal to end the game on a positive note.