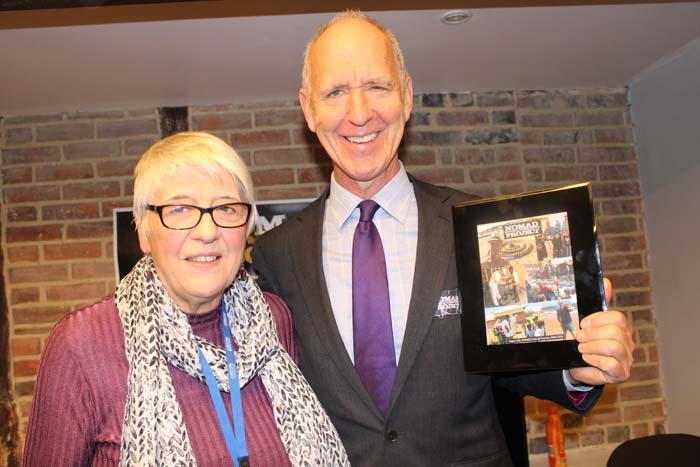 Nomad Youth & Community Project held their AGM on Monday this week when the Chair of Trustees, Roger Cole stepped down from his role and was thanked for his 15 years service to the charity.

Roger was presented with a framed photo montage of himself with children and families at some of the Nomad events including the annual summer beach trip.  Roger has been invited to be a Patron of the charity and will continue to help and support the charity.  Sue Prior from Nomad said, “You’ve embraced the work of Nomad and we will always be grateful for your support and input. You have just thrown yourself in. Roger replied, “I want to say a big thank you for being part of Nomad.  It’s been wonderful group of people to work with.  I will miss all the breakfasts, the beach trips and hearing about people’s lives being affected by the work that the charity does.  I was a weeny bit worried when I was asked to be a Patron as we did have a Patron here who was our MP who has gone on to bigger things – I wondered what the expectation was!”

Tim Prior, Nomad Youth & Families Team Manager gave a presentation on the work the charity has done over the last year.  Before he started though he said, “I found the 1996-1997 AGM annual report which was a fascinating read.” He paid tribute to Pam Phillips who was in attendance who is the sole surviving member and Tim said, “We genuinely really appreciate your wonderful support over the years.  You’ve been fantastic.  The four main years area of work that were listed in the old 1996-1997 report were street work, family support, supporting issue based work (drugs, alcohol awareness etc.) and community work (working with schools etc).   Tim said, “Fast forward to now and we are still doing these four things and more – schools work, targeted after-school work, family and parenting support and community work including the food bank.”

This year the charity has expanded their mentoring work in schools and are now working at Langtree and Chiltern Edge schools.  They are currently mentoring 35 young people in Henley and the surrounding area.  The charity has also expanded the number of residential trips this year.  They have included two trips to Snowdon and Scafell Pike.  Tim said, “There is really something special about getting to the summit.  It’s symbolic of life in many ways. Obstacles can be overcome with hard work, perseverance and lots of encouragement.  Sometimes you feel that you might not be able carry on and you need to stop and rest before you can continue.  That feeling when you reach the top is incredibly rewarding.  Our experience has shown that the residential trips improve our relationships with the young people we support.  It is time for the young people to reflect and develop healthier routines.”

Sue Prior and Angela Perks have just completed running the first Nomad Drug Proofing Your Kids parenting course and the feedback has been great.  Sue said, “This course is aimed at families who are not necessarily in crisis but it is about informing them, educating them and letting them know what’s happening locally.”

Tim told the assembled group how the charity are continuing to help a young man who is taking drugs and Sue showed a video of her interviewing a young lady who Nomad has helped over 10 years.  This lady was on the verge of dropping out of school and was using drugs. She failed her GCSEs and fell pregnant at a young age.  With the help of Nomad she then went to College and passed her English GCSE and has now secured a job at a local school working with young disadvantaged students. Asked how she would sum up Nomad she said, “Brilliant, helpful, kind-hearted and just amazing.”

Reverend Duncan Carter reported on the financials of the charity.  He said, “We are in a sound financial position but we have a deficit of around £19/20K due to a donation of £15K which didn’t materialise.  We are still continuing to do what we love to do and remarkable things have been achieved.”

If you would like to donate to Nomad to help with their important work, please contact tim@nomadhenley.co.uk 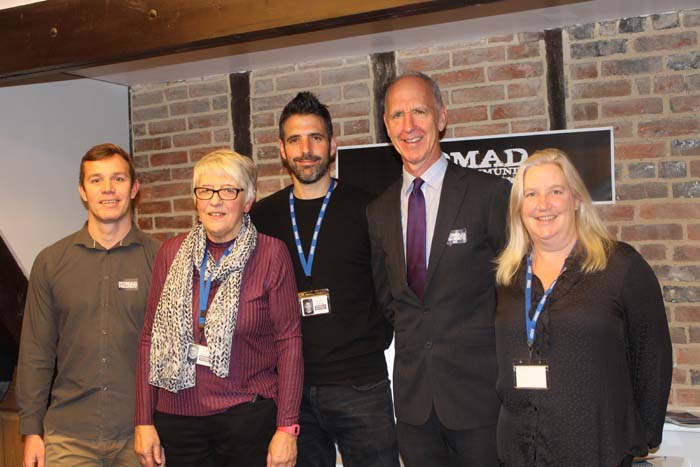