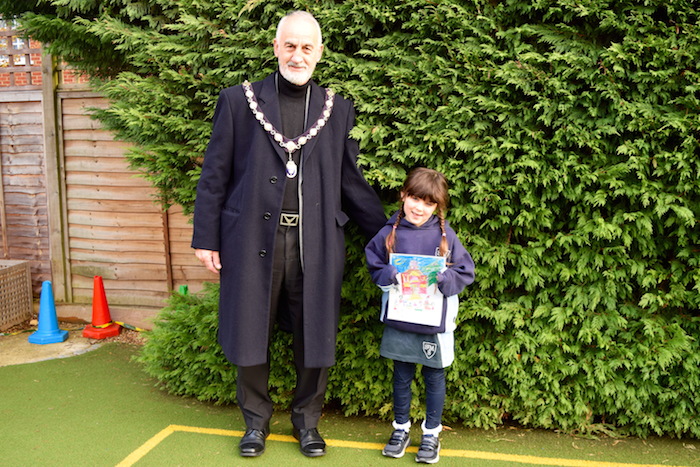 Phoebe Carey, aged 6 from St Mary’s School, has won the Mayor’s Christmas Card Competition for her fantastic drawing of a Christmas feast. Phoebe’s artwork is a tremendously festive picture of Henley at Christmastime, featuring the Town Hall as its backdrop.

The news was announced on Wednesday morning when Mayor and Mayoress Ken and Dorothy Arlett visited St Mary’s during their assembly. Mr Arlett explained that the competition was as tough as ever, with 220 entries to choose from making it extremely difficult for himself and the Mayoress to judge. “We looked and we looked and about an hour later we managed to choose four,” he stated.

Despite the incredible standard of entries, it was Phoebe’s design that stole the show for its closeness to the theme – ‘A Christmas Feast In Henley’. Mayor Arlett said, “We did ask for a Christmas festival and something to do with Henley, and the winning card had the Town Hall, it had a festive feast, a Christmas tree and it had someone giving out presents. We thought that covered everything that we were asking for.”

With Phoebe’s image depicting both the Town Hall and a Christmas tree, it seems incredibly poetic that she will get to turn on the town Christmas tree lights as part of her prize. On 29 November at the Christmas Festival, Phoebe can recreate her picture when she joins the Mayor on the Town Hall steps and switches on the lights of Falaise Square’s Christmas tree.

Phoebe has also won 4 tickets to see Sleeping Beauty, this year’s pantomime at the Kenton Theatre. Her card will be on display at the theatre, as well as being printed over 100 times for Mayor Arlett to send out as his official Christmas card. Narrowly missing out on the first prize was Ade Stevens-Sky, 8, from Badgemore, who claimed second place. Josh Drummond, 7, from Valley Road, was third, and Isabella Stobie, 8, from Trinity School, came in fourth. Each of the runners up will also have their cards on display at the Kenton Theatre, and decorative bunting will be made to showcase the rest of the 220 wonderful entries.

Julia Carey, Phoebe’s mum, said, “We are so super happy and proud that Phoebe’s card was chosen by the Mayor as his Christmas Card. Phoebe spends time every day drawing, she absolutely loves it, so winning the competition meant a lot to her and she has been on cloud 9 ever since.” 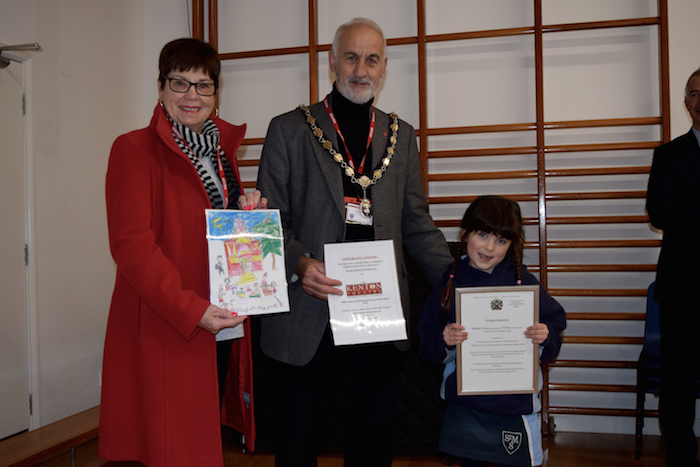