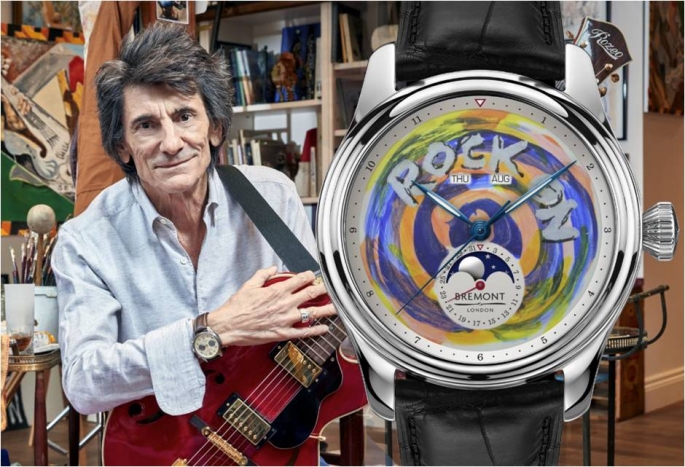 Ronnie has individually hand painted 47 limited edition watch dials whilst being on tour with the Rolling Stones, a nod to the year he was born, 1947. Each watch in the collection is a one-of-a-kind piece, showcasing original art from Ronnie himself, and housing a rather special Vaucher Manufacture Fleurier movement with moon phase complication. The exquisitely hand-finished mechanism has been housed in a beautifully designed and engineered 42mm, 18 carat white gold case using Bremont’s signature Trip-Tick® three-piece format. The official launch of the Collection was held last week in partnership with Watches of Switzerland in their London Knightsbridge showroom.

Ronnie commented, “Having spent so much time focusing on the dial designs, I’m really looking forward to seeing a completed watch. The white gold case will look fantastic with the guitar/’rock on’ type artwork and turning the watch over shows the wonderful mechanism with ‘I feel like painting’ around the edge and my signature on the rotor. I look at some of the dials and it brings back memories of having painted them on tour in places like Chicago, Seattle, or Philadelphia. In different places I’d get a little time to spend doing some art in between looking after those little twins and the music of course.”

Ronnie has established himself as an artist and his work is much sought after by collectors. Throughout the years, the artist and the musician have been inseparable. As his musical career progressed, Ronnie continued his passion for painting and drawing; his subjects ranging from band members and musicians he admired, knew and sometimes played with, to family and close friends – and of course, the self-portrait. 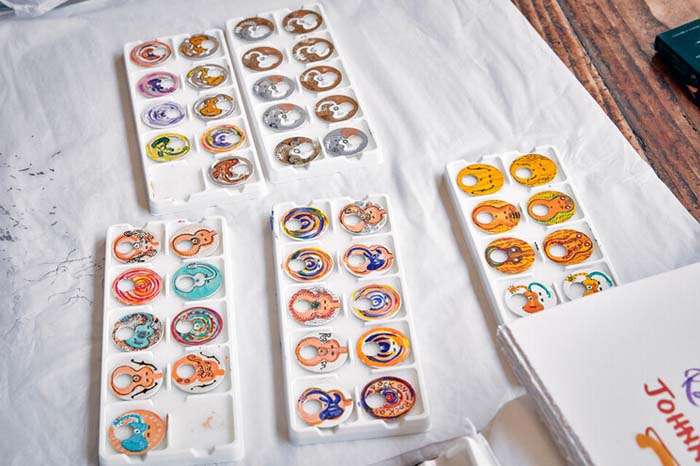 Ronnie continues, “I originally got into art from my two older brothers who I used to look up to. I had Ted who was 8 years older than me and Art who was 10 years older than me. They were both artists and they were both musicians, if they painted, I would paint and if they played, I would play. What’s quite nice is that the dials feel like old friends and together they’re all so different. They look like they’ve been done from all over the world, some with more Chinese and African influences as well as American through to the British countryside. They all have an ‘I feel like painting’ connection or a guitar that’s bent to fit into the dial shape, a horse, a ‘rock on’ or ‘rock hard’ or ‘time rocks on’ kind of message to the wearer so when he looks at the time, he thinks “I better keep rocking”.

“Painting these dials has been a challenge and I’ve always loved a challenge. I did my first venture with Bremont and the ship’s clock about 8 years ago and when Nick and Giles came along to ask me to do some small wristwatch faces, I thought how fantastic, what a challenge. The thing I found initially alluring about Bremont was having seen them incorporate original spitfire metal into some of their watches, which got me on the hook. The watches are very high quality and artistic so it’s easy for me to be involved.”

Bremont Co-Founder, Giles English remarked, “We’ve been extremely fortunate to have worked with Ronnie previously with some of our ship’s clocks and to now be launching a whole collection of watches with him is incredibly special for us, it’s a wonderful progression of our work together to date. Ronnie is a true creative in every sense of the word and seeing his passion for art is utterly infectious. To be able to translate this passion into a series of watches is completely unique, nobody else has ever done anything quite like this before in hand  painting so many one-of-one watches. As a collection, the watches sit beautifully together but each have their own distinct character. Having the opportunity to own an original, and wearable, Ronnie Wood artwork is quite something. It’s undoubtedly going to form an important and iconic part of Bremont’s history.”

Bremont Co-Founder, Nick English added, “It was a challenge to do the processes to protect the dials before and after painting. I have heard of an artist painting one dial before but not with such a comprehensive series of dials. We also felt that such an important watch required a beautiful movement and so we built it with this lovely moon phase complication. Mechanically, artistically, and in terms of its rarity, this is really a rather special watch.” 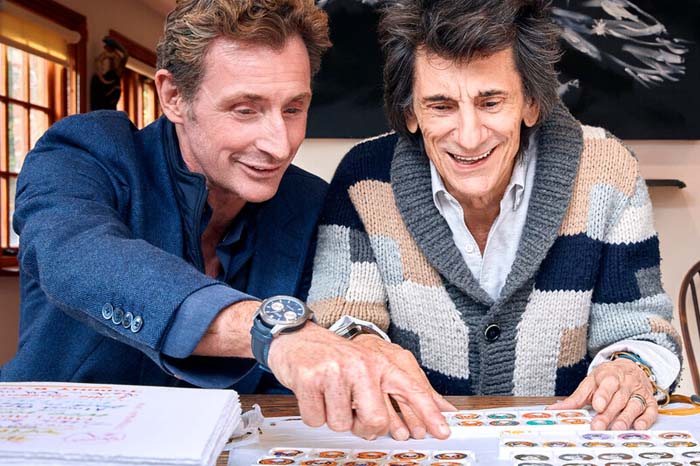