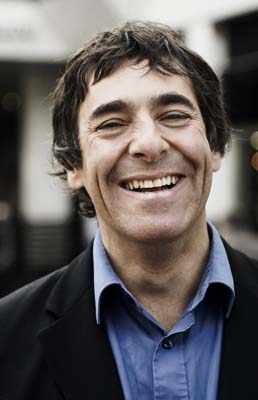 When comic Mark Steel toured his highly successful Every Little Thing’s Gonna Be Alright in 2018, his outlook was wonderfully hopeful despite the show describing when Donald Trump won the White House, the Labour Party seemed a busted flush, Britain voted to leave the EU, and his wife decided to leave him.

Now he’s back on the road with a reworked and updated version of the show which is coming to the Kenton Theatre on Friday 7 February 2020. Mark explains how the show came about, “Stand-up is not like film or theatre in that it can change during the run. You drop a bit here, and add a bit there, so by the end of the tour you may have a show that’s different at least in parts. But the new show is still essentially about me being chipper in the face of some miserable events.”

He adds with a laugh: “It may be I’ll get my comeuppance – that the good Lord is challenging me, he’s laughing at me before sending down the locusts. But I’m determined to remain optimistic.”

The first section of the show is political material and while Mark, a columnist for The Independent, is famously on the left, you don’t have to share his views to agree with his contention that UK politics at the moment are “mental”. By the time you see him on stage, he says drily: “We could all crawling around eating maggots, for all I know.”

Some of his views may surprise you – “I don’t condemn people who voted for Brexit, as some do. I don’t think they’re all idiots and I can see why they came to that conclusion” – and even admits to a certain regard for the Queen after learning of her disagreement with Margaret Thatcher over apartheid. “I don’t wish ill on anyone, but Philip’s not going to go on for ever, is he?” he says with a grin. “And if she needs a shoulder to cry on…”

And while Mark is not a cruel comic, he does like to have a bit of fun; be warned if your view about Brexit is an angry “Just get it done!” without any thought as to what that actually means. His rejoinder is: “You might as well vote to come out of the solar system.”

The show will also see Mark talking about his ex-wife of 11 years and the trials and tribulations of getting a divorce.

Mark has written and presented many series of Mark Steel’s In Town on BBC Radio 4 (new series out soon) and toured it live around the UK. He has presented the BAFTA-nominated Mark Steel Lectures for BBC2, and is a regular on BBC One’s Have I Got News For You and Radio 4’s The News Quiz.  Mark has also appeared on BBC2’s QI and Room 101. He has written several acclaimed books, including Reasons To Be Cheerful and What’s Going On, and writes a weekly column for The Independent – for which he won Columnist of the Year at the Press Awards in 2015.

Tickets are priced £20 and to book go to https://kentontheatre.co.uk/event/mark-steel-every-little-things-gonna-be-alright/

The Henley Herald website provides an up-to-date and unbiased digital news service for
Henley-on-Thames
Brakspear Makes Donation to Friends of the Earth and Installs Bee Hotels in...