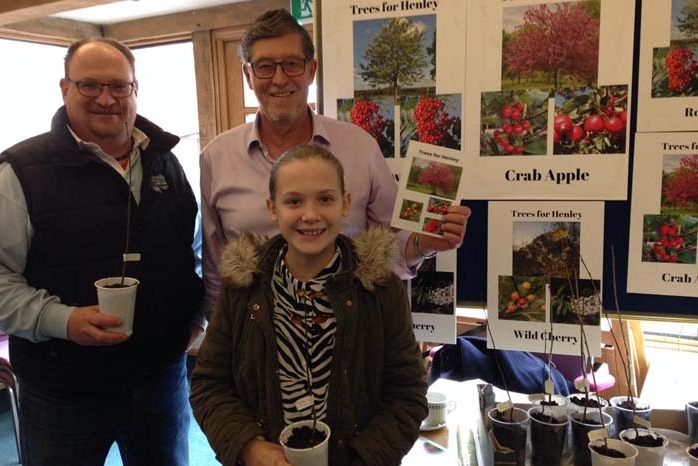 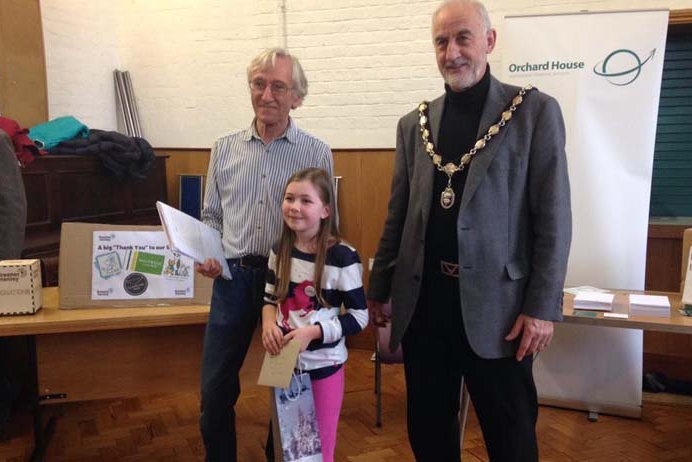 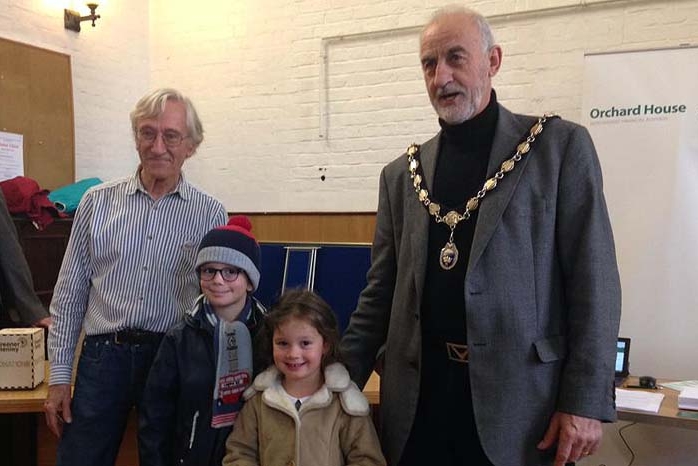 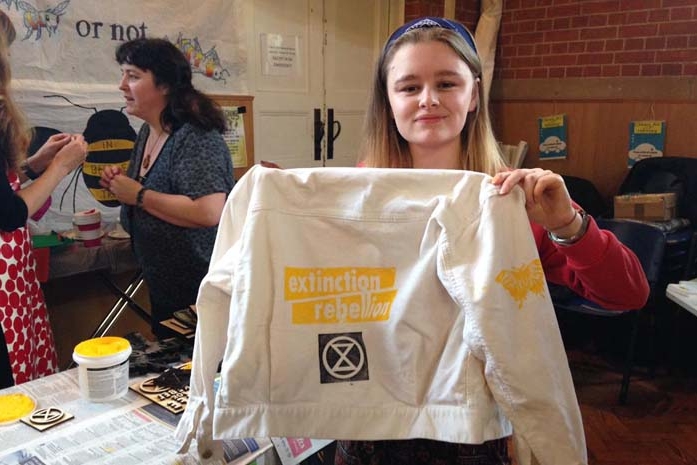 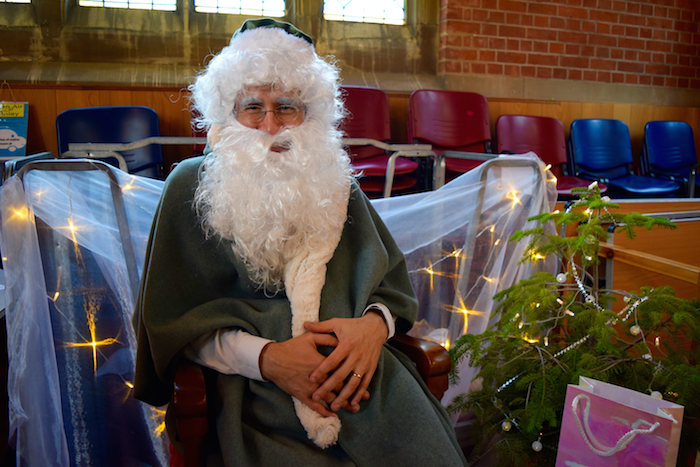 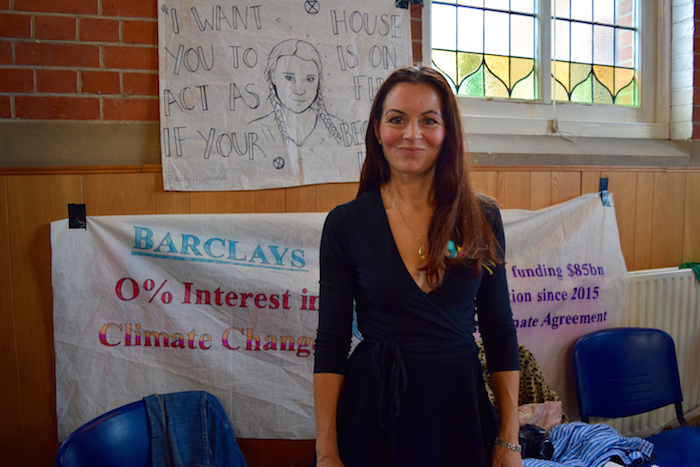 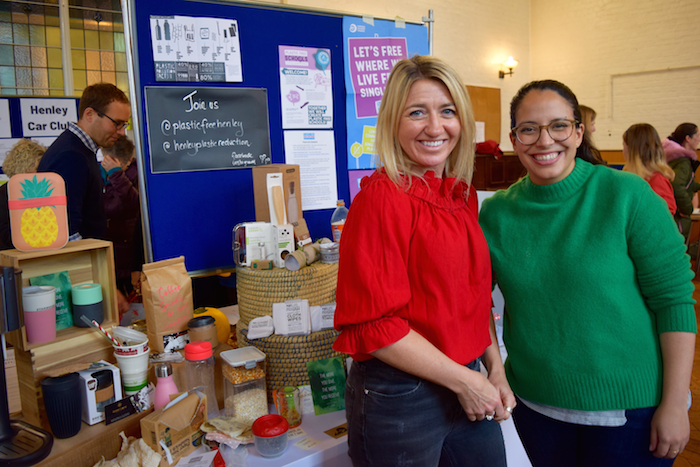 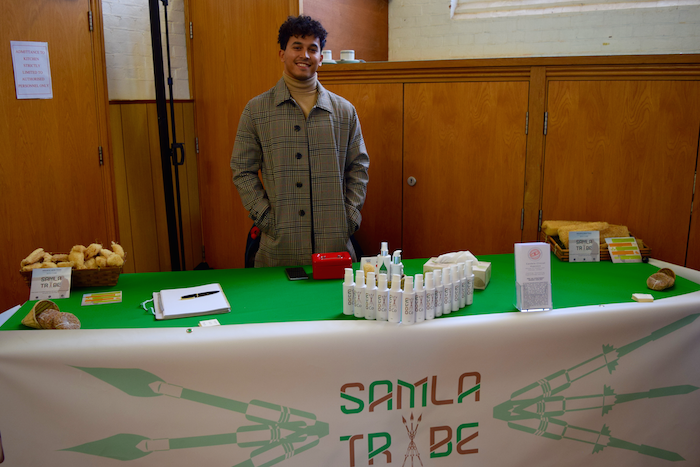 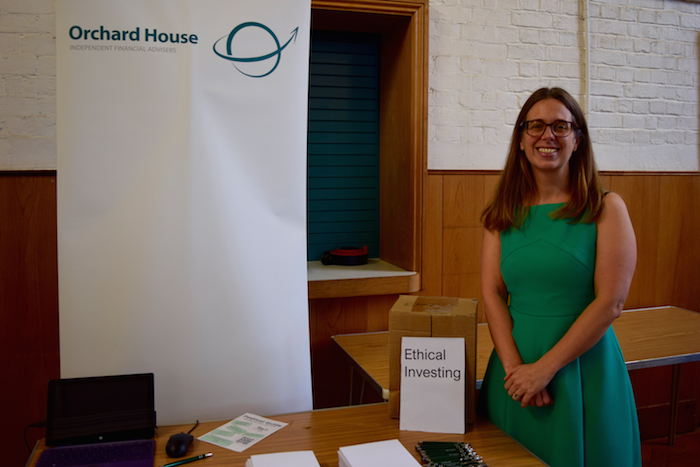 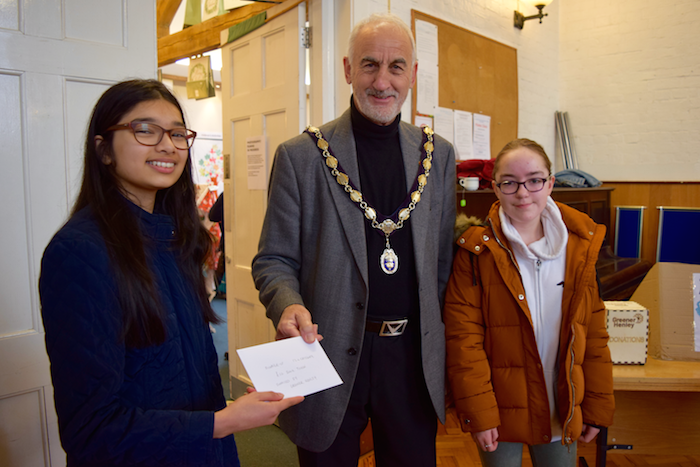 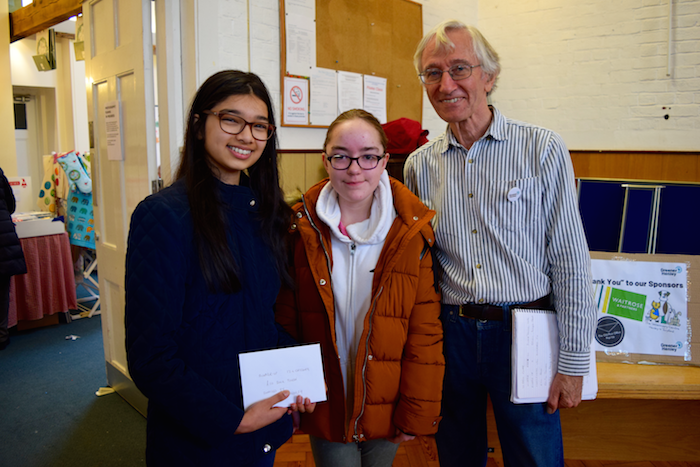 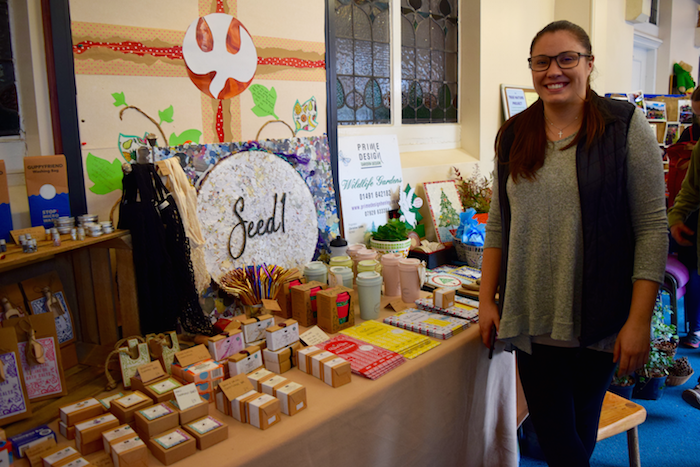 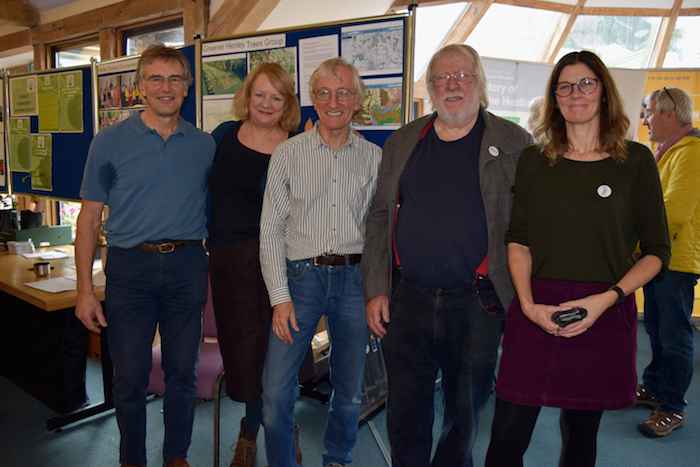 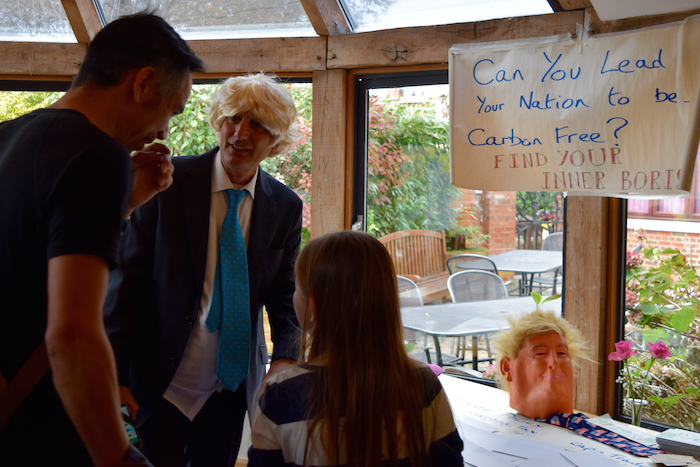 Local eco-conscious citizens joined forces last Saturday (16 November) for the first ever Greener Henley Festival. As global concern over the climate crisis mounts, local activitists, community groups and green-minded businesses came together at the Christ Church Centre to inspire, inform and advise us on caring for our planet.

Thirty stands lined the walls of the Christ Church Centre’s Pither Hall and corridor, each one highlighting a different approach towards the climate emergency. From zero-waste stores to local tree-planting initiatives, there was a huge array of representatives to learn from. Festival-goers could also take part in a number of climate-focused activities, including a Clean Air version of Snakes and Ladders, badge making, and cloth printing.

Green Santa was on hand to steer people towards a low-impact, low-waste Christmas, suggesting alternatives to wrapping paper (brown or recyclable paper, or cloth), and persuading us to give experiences or second hand, ethical gifts this festive season. The Festival offered a delicious array of homemade cakes and soups to keep visitors satisfied, all vegetarian or vegan in keeping with their low environmental impact ethos. Entry to the Festival was free, although donations were welcomed to help cover costs.

Encouraging the younger generations to get involved too, Greener Henley held a film competition for local school children, the winners of which were announced at the Festival. The contest, judged by David McEwan, Ruth Lindup, Patrick Fleming and Ian Petrie of Greener Henley, garnered 11 entries in total – nine in the under 12’s category, and two in the 12+ category – many of which focused on single use plastic and plastic pollution. Alexandra and James Sampson, the winners in the over 12’s category, created a humorous video on smart meters and energy saving, whilst the under 12’s winners, Luca and Jemima Wells, showed themselves going round the supermarket and picking out plastic-free choices. The winners were awarded with book tokens, kindly donated by the Bell Bookshop and Waitrose.

The runners up in the over 12’s category were the Gillotts Eco Team – Sonia, Farren, Maddie, Amelia and Anna – who created the film as part of their club. The group of Year 7s and 8s are taking action on the climate crisis, hoping to reduce the impact of their school on the planet. Sonia explained, “We want to plant more trees, make bird feeders and things like that. Each tutor group could plant a tree — just small things — and we want to get less plastic in the canteen too. We’re trying to get hold of the caterers and school council as well to reduce the plastic that we use.” She continued, “So far we have roughly 10 people in the eco group, but we want to extend those numbers. It’s all Year 7s and 8s, and we haven’t got anyone from the years above, so we’re trying to show people that it effects everyone and we have to try and do something.” The Gillotts Eco Group, along with every other entrant into the Greener Henley Film Competition, received a certificate for their creativity.

Other climate activist groups present at the Festival included Plastic Free Henley and the local branch of Extinction Rebellion. Plastic Free Henley, the volunteer-led initiative working with the national conservation charity, Surfers Against Sewage, is on a mission to achieve the ‘Plastic Free Town’ status in Henley. Sandra Munuera said, “We’re engaging with local businesses, schools, events, to actually help them go plastic free. Today we have an individual action plan that people can take on and pledge that they’re going to do it. It’s simple tips like taking your water bottle with you, taking your reusable coffee cup, refusing using straws. It’s simple steps you can do in your daily life to reduce your footprint.” She added, “We as individuals are starting our own journey of actually being conscious of what we use and what we buy in our daily lives. We’re not leading a perfect plastic free life but striving to, and that’s the example we want to put out there.”

Extinction Rebellion’s Henley group, also known as XR Henley, only formed in February, and has already amassed around 50 members. Extinction Rebellion’s global environmental movement, which compelled the UK government to declare a climate emergency after protests and demonstrations in April this year, uses nonviolent civil disobedience in the fight for climate justice. Katie, a member of XR Henley who attended the Greener Henley Festival, said, “I’ve been involved in the Autumn Rebellion, which has been a bit tricky for me as I’ve got a two year old girl. She’s the reason why I’m fighting now because I’m so worried for her future. We are all people who are very worried about the situation and we just want to people to be aware of how bad it is. We all want our children and the youngest generation to have a life as good as we had ourselves. It’s really amazing that we have this festival now in Henley, and it’s quite a good turnout as well.” If you are interested in joining either Plastic Free Henley or XR Henley, email plasticfreehenley@gmail.com or XRHenley@gmail.com.

Amongst the local zero-waste or environmentally-conscious businesses displaying their wares at the Festival were Henley’s zero-waste The Willow Basket, Marlow’s recently opened Seed1, and holistic, non-toxic skincare brand, Samla Tribe (stocked in Candela Hypnosis). Samla Tribe’s simple, clean and green range was offering only two skincare products, opposing the heavily wasteful consumption of the beauty industry. Brand Director, Joshua Laitphlang, revealed the company’s aspirations of becoming even more environmentally friendly. “We’re in the process of becoming zero waste,” he explained. “So far we’ve achieved that by eliminating the use of products by creating just two products in the range which are multifunctional, cutting out things like toners, cleaners, make-up removers, night oils and moisturisers and so on. We’ve combined that all into one product. It’s so safe you can eat it, so it’s safe for you and the environment. We want to do refills. I’m still trying to find an option for that, maybe a biodegradable sachet. That’s the tough part, but at the moment all the packaging can be recycled or reused.”

Greener Henley, formerly Henley in Transition, is a group of local people trailblazing the way in the fight against climate destruction. The Greener Henley Festival was put together in barely one month, from initial idea to the final result. It’s a feat that may have failed had it not been for the passion of the Greener Henley team. David McEwan, one of Greener Henley’s founders, said on Saturday, “It’s fantastic, just brilliant. I can hardly believe it from a standing start a month ago and it’s just all come together. And it’s because the people are who are involved in Greener Henley threw themselves into it and got the word out there. Also we’ve also got quite a number of businesses involved as well and it’s just amazing what is going on in Henley. It’s brilliant.”

Greener Henley are already planning on a second Festival next spring based on the success of last weekend’s event. The group itself has seen an influx of new members recently, which David puts down to the climate emergency, Blue Planet, and David Attenborough. He said, “It’s in the news now and I think people are genuinely worried about the future but here’s something you can get involved with – Greener Henley – and you can do something in Henley that’s actually gonna make a big difference.” If you are interested in joining Greener Henley and doing your bit for the planet, you can visit their Facebook page, or email greenerhenley@gmail.com

Though climate breakdown may not be stopped by one small town alone, the Greener Henley Festival gave hope to even the most eco-anxious individuals. Emphasising the impact of collective action, the many experts and enthusiasts at the Festival were role models for leading a truly sustainable life for both people and planet.