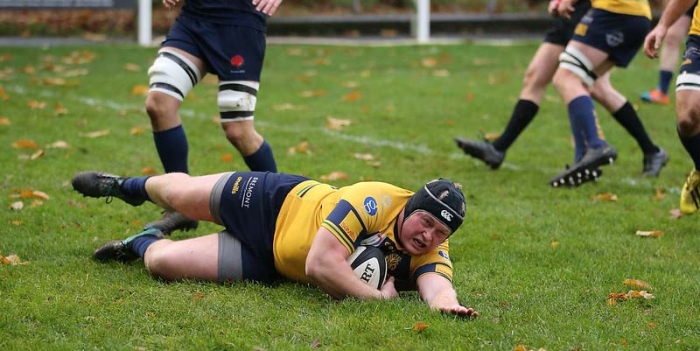 Hawk’s prop Charlie Hughes claimed a hat trick of tries as Henley continued their challenge at the top end of the table with a deserved bonus point victory over a spirited Barnes side at Dry Leas on Saturday.

It was a good, solid performance by the Hawks who scored five tries but they were made to work hard for the victory which keeps them in third place in the league table.

The two teams were met with damp conditions but not the persistent rain of recent weeks , offering the Hawks an opportunity to play their expansive game. Sensibly however, it was the forwards who set up the victory in the first half, taking the game to their opponents. They also came up against a useful Barnes side who defended well, moved the ball quickly when they had the opportunity and never gave up.

The Hawks started where they left off last week at Esher and were on the scoreboard within the first five minutes. Will Bordill made a good break through the Barnes defence and was well supported by Ewan Fenley. Charlie Hughes was on hand to take the final pass and crash over for the Hawks first score.

In fairness, Barnes then enjoyed some good possession and created a penalty chance which Josh Hammett converted. The Barnes forwards then created some more pressure on the Hawks defence. Another Barnes penalty was this time kicked to the corner and from the resulting line out, the Barnes pack drove Cieran Smyth over under the posts. Hammett converted to out the visitors 10-5 ahead.

Barnes had plenty of the ball and used it well, moving it quickly and kicking for position. Once the Hawks got some worthwhile possession, they were a constant threat with Alex Bradley and Sam Lunnon leading the charges. The Hawks retook the lead with their second try after a good run from Reuben Norville, backed up by a surging drive from Dave Hyde. Charlie Hughes was again on hand to take the final pass to score his second try which Ben Bolster converted.

Barnes almost reduced the arrears when a backs move broke the Hawks defence only for the ball to be dropped when they were clean through.

Henley’s front row of George Primett, Tom Emery and Charlie Hughes started to dominate the scrum and provided the chance for Hughes to claim his hat trick. Alex Bradley picked up and drove for the line with Hughes on hand to dive over for the try which Ben Bolster converted.

The Hawks then scored the try of the game just before the break. Ben Bolster broke out of defence in his own half was well supported by Ewan Fenley. The scrum half realised he wasn’t quite going to reach the line and put a short grubbed kick which was perfect for Jack Robinson who outpaced the Barnes defence to score in the corner, giving the Hawks a 24-10 lead at the break.

Henley then dominated the second half both in terms of territory and possession. Will Bordill and Sam Lunnon excelled for the Hawks as the rest of the game was engulfed by heavy rain. The Henley scrum was totally dominant by now and the forwards showed good intent with a pick and drive game and short passes to minimise errors. However, Barnes were a competent side and defended well but the pressure eventually told and Bolster increased the home side’s lead with a penalty following a strong run from Xav Andre.

Tom Emery and Ewan Fenley went close for the home side before Sam Lunnon scored the Hawks fifth try which Bolster also converted to give the Hawks a 34-10 lead.

With the ball now like a bar of soap and the game won by the Hawks, both sides started making handling errors, Barnes, began to get some momentum and dominated the last quarter of the match scoring a brace of tries. Ex Hawk Basil Strang ran strongly through the Henley defence to score a try which Hammett converted and then shortly afterwards, Jamie Collins got a deserved third try for the visitors just before the end.

This was a good workmanlike performance from the Hawks, claiming the all important bonus point to keep them in contention at the top of the table.