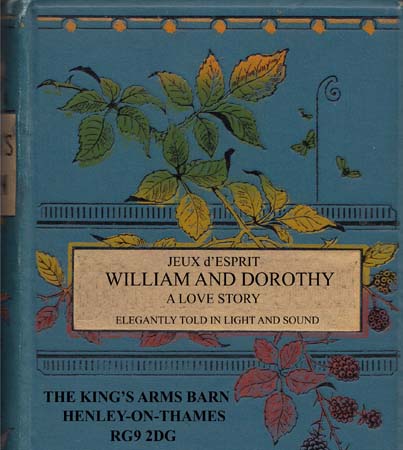 Jeux d’Esprit brought the words of William and Dorothy Wordsworth to life this weekend with the return of their annual Chiltern Centre fundraising shows. William and Dorothy: A Love Story was a spectacle of light and sound, capturing the bond the two siblings shared and showed through their writing. The six shows, held between Friday and Sunday, raised over £1500 for the Chiltern Centre.

Jeux d’Esprit’s son et lumière shows for the Children Centre began in 2015 at the Old Fire Station Gallery, where they raised £200 for the charity. Between 2015 and 2018, the group has showcased the works of Charles Perrant, Christina Rosetti, M.R. James, and Edgar Allen Poe amongst others, whilst collecting over £4000 in aid of the Chiltern Centre.

This year’s shows generated an over £1500 in donations, bringing the total raised for the Chiltern Centre throughout the years to over £5500. Admission to the shows was free (with a glass of wine included alongside the entertainment), so the final figure collected was entirely the product of the audience’s generosity.

William and Dorothy: A Love Story told the factual tale of the two people and their close relationship, evidenced in Dorothy’s Lakeland Journals and William’s poems. The cast of Jan Corby, Steffen Collings, Janice Selkirk, Brian Cheadle, Tim Green, Janice Stow and Bethan Hodge gave voice to the works of William and Dorothy, their readings recorded and laid over a landscape of contemporary paintings. The artwork (paintings by J.C. Ibbotson, Benjamin Williams Leader, A.W. Shuter, Joseph Wright, W.H. Pyne, John Petty, John Macwhirter, Margaret Gillies and John Harden) was projected onto a black curtain, capturing the imagery of the Cumbrian Hills where many of the Wordsworths’ stories were told. Angela Pengilley provided the musical interludes between each piece with a piano score performed and composed by herself. These three elements — music, voice and imagery — were stitched together by Jeux d’Esprit’s technical wizard, Bruce Smith.

The content of the show was intellectually challenging, the meaning of William Wordsworth’s poetry subject to interpretation. Steffen Collings reflected on responsibility of performing these perplexing poems in the show programme, particularly referring to ‘Lines Composed Above Tintern Abbey’. “When I read it I never really made up my mind what it meant,” he wrote. “As with all great art, you are changed a fraction after the experience; you have travelled along its course and arrived somewhere less familiar. As a listener you can abandon yourself to its eddies, swirls and currents, following T.S. Eliot’s advice that poetry should be felt before it is understood. But surely as a performer you have a responsibility to the poet to know his intention?” Steffen concluded that poetry ought to be seen as a living, changing art form — “As with the river, so with the poem – it is alive, created to be experienced now, and if we drift off course a little in this, well, let’s just go with the flow.”

William and Dorothy: A Love Story was organised and created largely by a core team of four people: Bruce Smith, Angela Pengilley, Steve Allender and Jill Richardson. Whilst Bruce was responsible for sound and lighting design, compiling the different elements of the show, Angela composed an evocative musical soundtrack to the writing. Steve Allender’s cartoon flyers brought in the audiences, and Jill Richardson’s dreams were made reality by the team around her. In the programme, she paid thanks to the many people who helped to create the show, with special mention given to Dave Pengilley, John Thornley and Tom Richardson. The programme read, “Her gratitude to the team, the actors who have been loyal throughout the years and, of course, you the public is beyond her wildest dreams.”