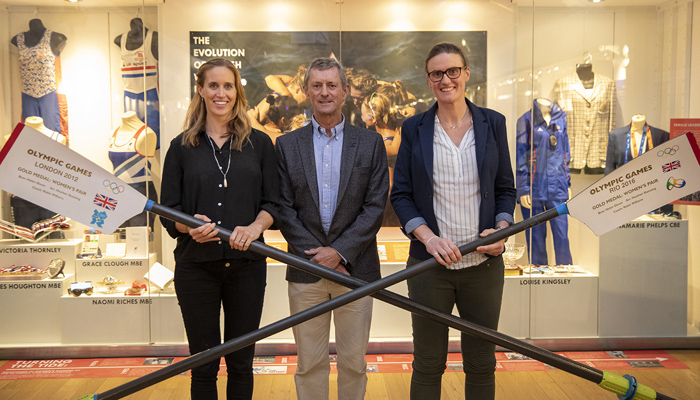 The River & Rowing Museum, welcomed leading figures in rowing to celebrate women’s rowing and join the debate about the future of rowing at their recent Rowing Futures Conference.

With ten Olympians, with 16 Olympic medals between them, the International Rowing Gallery was buzzing with excitement and anticipation – and it didn’t disappoint.

Dr Sarah Posey, Director, River & Rowing Museum said, “It was really thrilling to have the River & Rowing Museum at heart of the sport of rowing at the weekend: showcasing the glorious achievements of women’s rowing at the Olympics and Paralympics since 2000, hearing about Team GB’s preparation for Tokyo 2020, and hosting debates about access to the sport and its changing formats – not just for elite athletes, but for everyone.”

From members of the current GB Rowing Team, to the pioneers of Indoor Rowing, Beach Sprints and Para-rowing, the Rowing Futures conference debated how the sport is becoming more diverse, embracing new formats and looking to the future.

Leading figures in the sport, including Steve O’Connor, CEO of London based charity Fulham Reach Boat Club, and David Tinnion from London Youth Rowing, enthused about how they are opening up access to the sport, providing opportunities for young people from a varied range of backgrounds the opportunity to get involved.  Other speakers included Andrew Triggs-Hodge OBE,  Mark Davies, Chair of British Rowing and Brendan Purcell, Performance Director of GB Rowing Team.

Attendees celebrated the launch of the women’s rowing display in the International Rowing Gallery, featuring the ‘Unbeaten Boat’ in which Helen Glover and Helen Stanning won Olympic Gold. The River & Rowing Museum would like to thank the Henley Royal Regatta for its generous support of its new display.  Read the interview about the interview with Helen and Heather here.

Sir Steve Redgrave CBE said, “Henley Royal Regatta is very proud to support this important new display at the Museum. Acknowledging the achievements of British female rowers and celebrating their success over the past 20 years is incredibly important to inspiring the next generation and the long-term growth of the sport.”

Guin Batten, Olympic Medallist, Chair of British Canoeing said, “It was fantastic to see so many people involved in the world of rowing come together to celebrate the past and to engage with the future. I am particularly delighted to see women’s rowing taking centre stage in the gallery at the Museum for the first time and look forward to seeing how that display continues to evolve.”

Greg Searle MBE said, “It’s great women’s rowing is being recognised and has its place in the Museum. I’ve loved seeing the progress in performance of the women’s team throughout my career.”

The River & Rowing Museum acknowledges with warm thanks the generous support of Clive Radley towards the conference.