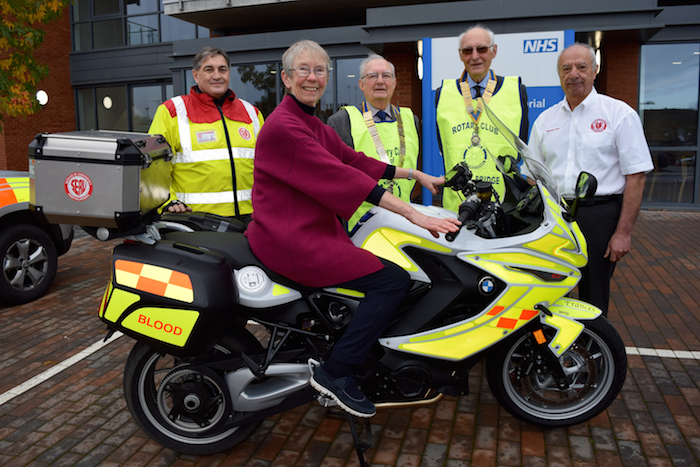 The Rotary Clubs of Henley Bridge and Henley-on-Thames were proud to present a brand new BMW motorbike to the SERV OBN Blood Bikes charity last Wednesday. The bike, named after nurse Sister Frances Dominica, was purchased using the money raised from October’s Henley Half Marathon & 10k races. SERV (Service by Emergency Rider Volunteers) OBN will use the bike throughout Oxfordshire, Berkshire, Buckinghamshire and Northamptonshire, delivering blood and human milk to 26 hospitals during times of need.

The Henley Rotary Clubs chose for SERV OBN Blood Bikes to benefit from the Half Marathon & 10k entry fees after Henley Bridge received a talk on the charity in August. Guy Lipscomb, Operations Manager for the volunteer-led organisation, made a presentation to Henley Bridge Rotary which made club members aware of the charity’s impactful work in supporting the NHS. Henley Bridge Rotary Club President, Malcolm Leonard, explained, “We wanted to offer to help. Rotarian Ian Black advised that someone, who wished to remain anonymous, was prepared to match fund whatever we could raise towards a bike — an opportunity not to be missed. Our Henley Half Marathon partners, the Rotary Club of Henley-on-Thames, agreed with us that we should use proceeds from the Henley Half Marathon for this and fortunately we did raise enough at the event. This clearly shows the value of Henley Rotarians organising the Henley Half Marathon so we can make a positive contribution to society.”

On Wednesday 27 November, Malcolm Leonard and Rotary Club Henley-on-Thames president Barry Prior presented the bike to SERV OBN Chairman Kamran Irani, joined by Guy Lipscomb and the bike’s namesake, Sister Frances Dominica OBE. As each bike is named after a woman who has done exceptional work in nursing, the Rotary Clubs felt that there was no better person for their bike than Sister Frances, who founded the Helen and Douglas Homes hospices for children. She said on Wednesday, “I’ve been on the scene for a while but I’ve never before been asked to unveil a BMW Blood Bike. This is a huge privilege. I know as a nurse what amazing work Blood Bikes have done since, I’ve just learned, 1962. It’s pretty fantastic.”

The newly donated ‘Sister Frances’ Blood Bike will join a fleet of motorcycles and 4 x 4 vehicles, operating across the four counties to provide a rapid response courier service to the NHS, free of charge. The bike will likely travel 40,000 miles in a year, driven by volunteer riders to transport blood and human milk to 26 different hospitals. After being officially presented to the charity, the ‘Sister Frances’ bike was put straight on duty to replace a bike with a puncture.

Guy Lipscomb, one of around 100 volunteer riders for the charity, explained the impact that the new bike will have on the operation. “It gives us an extra vehicle, which means less distance for each individual rider to go and collect it. Each rider operates out of their own house so they are responsible for going to collect the motorcycle before their shift. The more vehicles we have, the easier it is for them to go and collect, as the likelihood is that it’s going to be a closer distance. And of course, when you have an issue like today where a bike gets a puncture, I’ve got a bike sitting around that I can push straight into duty so we don’t miss a beat. It’s money saved in the end, because the NHS would have sent [the blood] by some kind of paid transportation, but that’s a few pennies more that they have to spend on something that we could have done for free.”

Kamran Irani said, “Serv OBN as a charity is dependent entirely on public donations and the support we get from Rotary Clubs and such things. We do an awful lot of miles — we did over 200,000 miles last year — so the equipment replacement is always a big issue for us. It’s a capital cost, so the support that we get from Rotaries in this way is fundamental to us being able to continue our operation.”

The ‘Sister Frances’ bike will last for approximately four years, and though the impact it will have is impossible to quantify, it will no doubt be instrumental in saving hundreds of lives. Malcolm Leonard concluded on Wednesday, “We therefore thank all runners, sponsors, and helpers in the Henley Half Marathon for making today possible.” 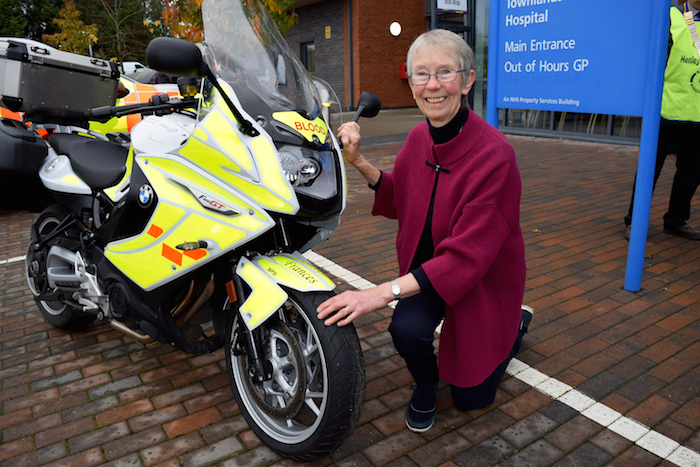