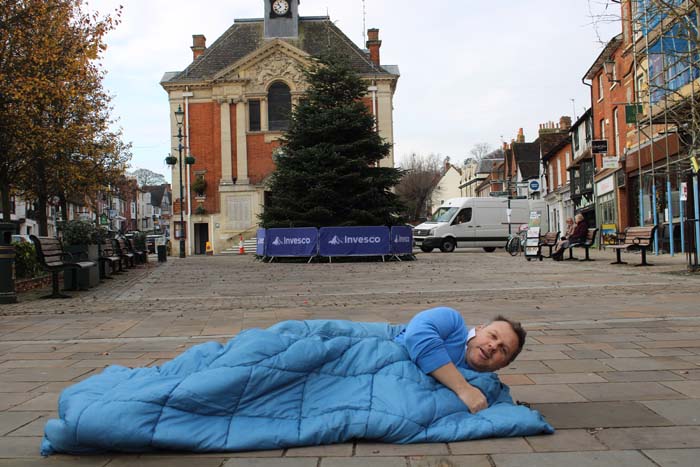 Over 300,000 people are homeless in the UK. Carl Williams has organised Henley’s Big Sleep Out to raise money and awareness of homelessness on Saturday 7 December in Market Place.  It will be part of the World’s Big Sleep Out taking place that day too.

The event starting at 8.30pm has been approved by Henley Town Council and will finish around 7.00/8.00am the next day. Up to 200 people can join in the Big Sleep Out in Henley.

The global event will see 50,000 people sleep out in cities including LA, London, New York and Dublin and is run in partnership with the Institute for Global Homelessness (IGH), UNICEF USA, Malala Fund and Social Bite. Social Bite started as a small sandwich shop in Edinburgh that started offering employment and free food to homeless people.

Carl said, “I wanted to organised the event because I spend a lot of time in London and see a lot of homeless people.  People are suffering for different reasons. I don’t want to get into the politics. We are a bit sheltered in Henley and I thought it would really nice to do something in Henley to raise awareness of what other people are going through.”

Carl is asking people to make a minimum donation of £5 and encouraging people to get sponsorship like he is doing.  Nomad Youth Community Project will be collecting for their food bank and Homeless Oxfordshire are appealing for donations of warm winter clothes, coats and sleeping bags.

People who want to take part should contact Carl at carl@sikta.com or 07880 977174.  Tents are permitted but no cookers or barbecues are allowed.  Harrods Cafe have agreed to stay open later.  If you would like to sponsor Carl click here

Other city events have bedtime stories read by celebrities.  Carl is hoping that he will a secure a celebrity for Henley’s event.

For information about the World’s Big Sleep Out go to www.bigsleepout.com