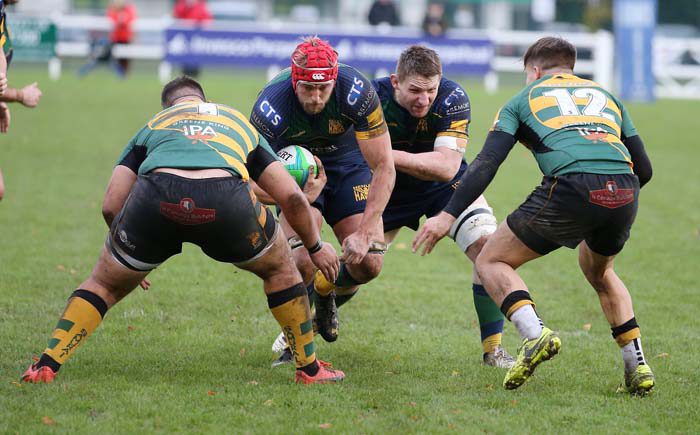 Following their exploits in the Bristol last Saturday, the Hawks are at home this week with Suffolk outfit, Bury St Edmunds RFC visiting Dry Leas for the latest National 2 (South) fixture. Kick off is 3pm.

The Hawks are building momentum again, having won their last three games and are now just a point off the top of the table. The result last week shows that no game is easy and no result is certain, with most teams in the league capable of producing a really difficult challenge for the Henley, especially now that the Hawks are amongst the front runners. Saturday will be no exception with the visit of Bury St Edmunds.

Dings is not as easy place to go for any side and the fact that the Hawks came away with a bonus point win, shows the quality, resilience and togetherness of the squad. They again had to produce a great second half performance to over come the Bristol side having been behind 15-5 at half time. Star of the show was scrum half Ewan Fenley who has certainly made such a positive difference to the team this season. He scored one try in the first half and a hat trick of tries in the second half that put the Hawks in control. Ever present hooker Tom Emery  is also getting back to his best form, scoring one of the crucial tries. The Hawks scored another six tries last week with only Taunton claiming more bonus points. In fact, Hawks skipper Sam Lunnon is the leagues top try scorer with 12 while Ewan Fenley now has 10. Ben Bolster is in the top six point scorers in the league.

Last week’s victory moves the Hawks into second place in the league table, just one point behind the leaders, Tonbridge Juddians. Tonbridge had a comfortable bonus point win at Barnes, 32-12 but the surprise was Taunton Titans. They slipped to third, losing a tight game 12-6 at the impressive Leicester Lions who are now in fifth place. Clifton continue their good form and are in fourth place, following their 59-14 demolition of Westcliff. There are only three points separating the top three teams and with Clifton and Leicester also in good form, it’s an exciting league with lots to play for as we get into the Christmas fixtures.

Head coach Luke Allen has made four changes for the Bury St Edmunds game. In the backs, Alex Burrage moves from centre to start at outside half in place of Ben Bolster. Connor Morrison returns to take his place in the centre.

In the forwards, there are just two changes. Prop Rory Mason starts this week in place if Charlie Hughes to join Tom Emery and Brad Cook in the front row. In the back row Will Bordill returns to the side with joint skipper Sam Lunnon taking his place on the replacements bench. Elliot Deacon, George Primett, Charlie Wicks and George Griffiths are also on the bench this week.

Bury St Edmunds have won seven out of their twelve fixtures so far this season and currently lie in a solid 8th place in the table. Most of their victories have come against teams in the lower half of the table but they have recorded wins against Esher and Dings Crusaders. However, they have yet to win against one of the top six sides which suggests a positive outcome for Henley. The men from Suffolk will, however, have other ideas and the Hawks will need to concentrate for a full 80 minutes against one of the league’s solid mid table sides.

Last season, the Hawks did the double over Bury winning a high scoring game in Suffolk 45-37 and then 33-12  at Dry Leas. They finished 8th last season and some 52 points behind the Hawks.

There is a double header at Dry Leas on Saturday with the Hawks 2nd (Bulls) XV taking on the Bury St Edmunds 2nd XV. Kick off for this one is 2.15pm.

The Henley 3rd (Vikings) XV have an all Oxfordshire contest as they travel to take on Faringdon RFC. Kick off is 2.30pm.

Support Small Local Shops and Reward Yourself Too
Scroll to top