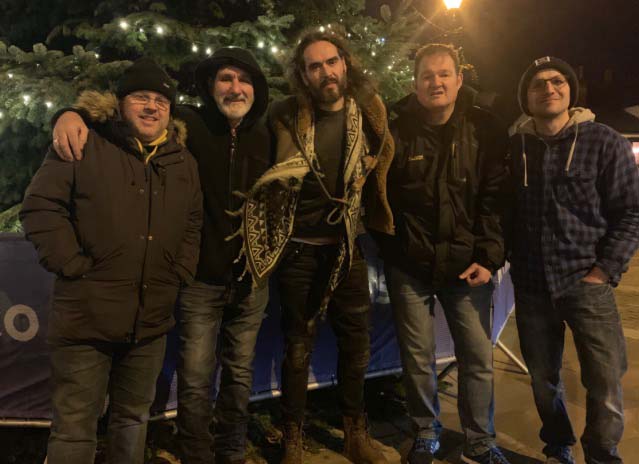 With the wind and rain forecasted on Saturday night, many who had signed up to do Henley’s Big Sleep Out in aid of homelessness pulled out at the last minute but event organiser, Carl Williams was joined by 3 others who were delighted to have a visit from comedian, Russell Brand.

Carl said, “Russell turned up abut 10.30/11.00pm and had come from Reading.  He immediately said let’s have a selfie next to the Christmas tree.  We hoped he was going to read us a bedtime story like other celebrities were doing at the other Big Sleep Outs.  It was great for him to pop by though.  It was cold, windy, wet, uncomfortable and noisy!  Even though there was only four of us we raised a staggering £2,000.  I have plans for next year to make it bigger and better and to give people more notice next time as it’s a busy time of the year.”

Russell has supported homelessness in the past.  In 2018 he started a campaign in response to a request by the Leader of Windsor and Maidenhead Council for police to clear rough sleepers from the town ahead of Royal Wedding.  Brand’s started a petition which gained 15,000 signatures for Slough Borough Council to gift an existing building to homeless charity SHOC (Slough Homeless Our Concern).

The Big Sleep Out was part of a global event which saw thousands of people sleep out in cities including Trafalgar Square in London, LA, New York and Dublin and is run in partnership with the Institute for Global Homelessness (IGH), UNICEF USA, Malala Fund and Social Bite. Social Bite started as a small sandwich shop in Edinburgh that started offering employment and free food to homeless people.

Carl was joined by Deputy Mayor, Dave Eggleton, Ryan Buckett and Dr Jamie Samson and they slept in the doorway next to Superdrug overnight on Saturday.

Deputy Mayor, Dave said, “We couldn’t find anywhere else that we could all fit in but the loud creaking noise from the Town Council’s Information Centre sign kept us awake all night.  I shall have to put a complaint in about that!  Between 12-1am it was tipping it down and I think I only got about an hour’s sleep.  I haven’t slept outside since being in the territorial army about 25+ years ago. Hof’s wine bar brought us some hot mulled wine. It was an amazing thing to do and we received some different reactions from people when we said ‘Good Evening’ .  Some people warm to you others walk past.  Two guys who walked past though then came back and gave us some money.” 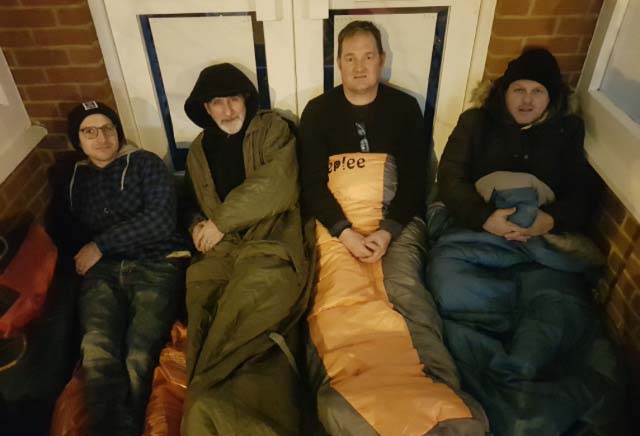