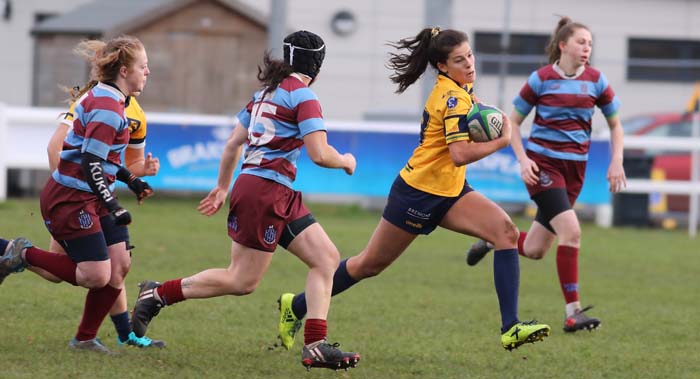 As we enter the festive period fixtures, Henley Hawks Women came into the game against Hove Women with high spirits after two tight losses against Trojan and Old Albanians. Expectations growing that the elusive win that those performances deserved was just around the corner.

A strong start by the away side had Henley under pressure in their own half for large portion of the first 30 minutes. However, unlike early in the season where this pressure would have seen Henley give up points, the continually improving team line speed coupled with intense defensive contact was excellent in hurrying the Hove ball and forcing mistakes.

Occasional relief was offered in a fantastic line break and offload by Lininia Kaufana in a move that was only denied a try by a great recovering tackle. However there is only so long a defence can hold out when pressure is applied, two line breaks got Hove within 5 metres of the Henley line and a secure carry by their fly-half got them over the line near the corner, 0-5 with 30 mins gone.

Not to be disheartened Henley came back firing, building a strong platform and forcing Hove into giving away penalties resulted in Laura Wilkie crashing over the line to level up the scores. A missed conversion from a hard angle against the wind by Emma Leonard, 5-5.

In the second half of the game is where the Hawks started to showcase their growing confidence with better and better play throughout the half, Nina Webb cannoning into the Hove line, making metres whenever she took on the ball. An offload set Jemma Thripp free on the wing as she drove through two of Hove’s players but was brought up three metres short.

Henley were now in the ascendancy and a try looked close after phase upon phase within the Hove 5m line, one point literally a hands width away, but with solid defence from Hove and an unfortunate knock-on in the attack meant that Henley were rebuffed. However, a penalty conceded by a Hove forward gave Henley three points through the boot of Leonard putting the score at 8-5.

With the clock ticking down towards a well-deserved win controversy struck. Hove broke through the line on the right, a tackle seemingly took the Hove player into touch before her offload, the flag of the volunteer assistant was raised then dropped. As Henley slowed, reacting to the flag, the Hove player raced in to score. It seem sure that the game would be brought back for the line out instead the try was awarded to the dismay and astonishment of Henley, 8-10.

Henley through captain Katy Wysocki-Jones showed great composure and poise to push down their anger and disappointment and attempted to rally one last time to no avail. Final score 8-10, another losing bonus point but so close to more, the Hawks will use this disappointment as fuel in the coming week to strive harder and claim their just deserves.

Player’s Player – Nina Webb, Nina used footwork to attack space as well as speed to gain ground in attack, She was also quick to react to turn over ball and supporting the ball carrier.

Coaches’ Player – Jennifer Kingman, working relentlessly in defence to put Hove under a huge amount of pressure, closing down space and making key tackles throughout the game.