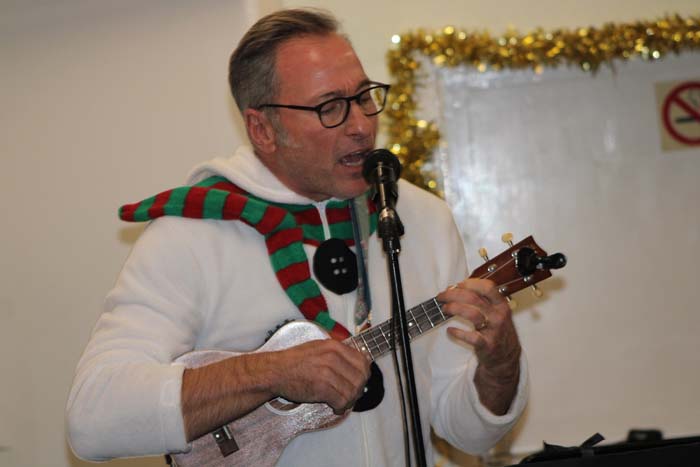 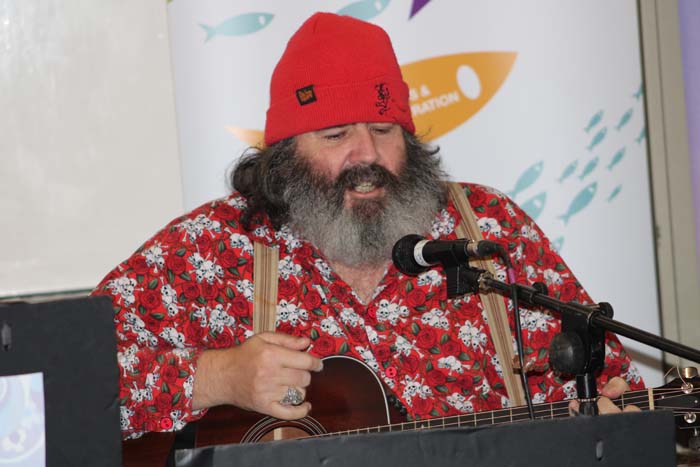 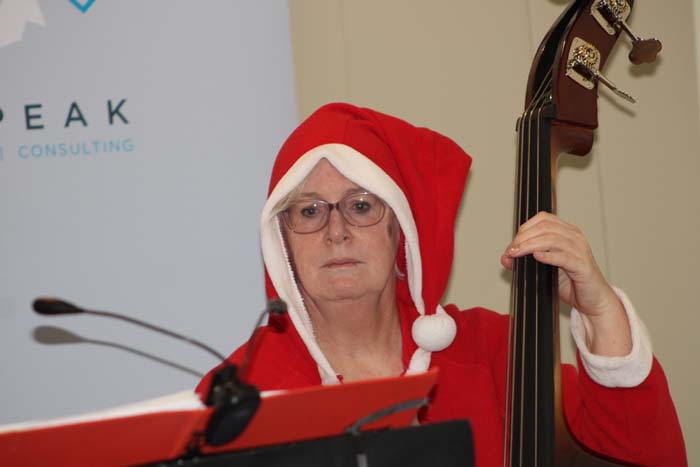 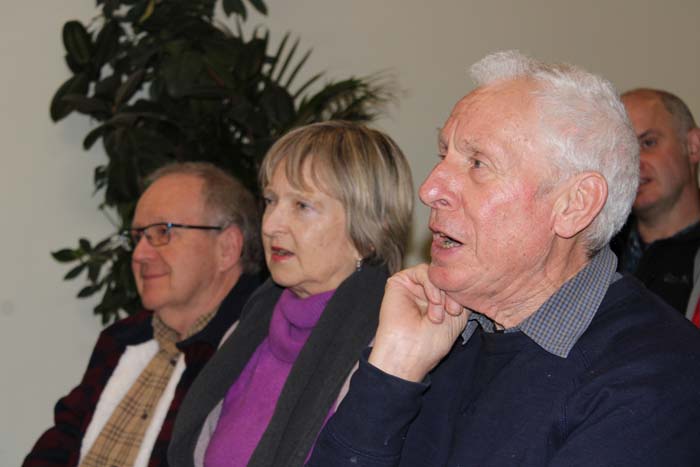 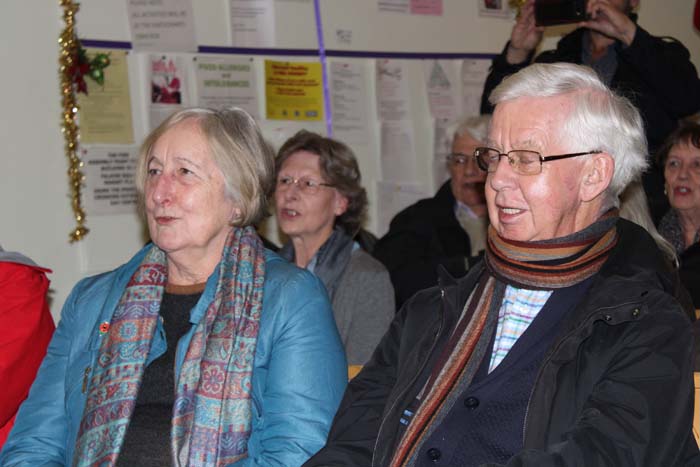 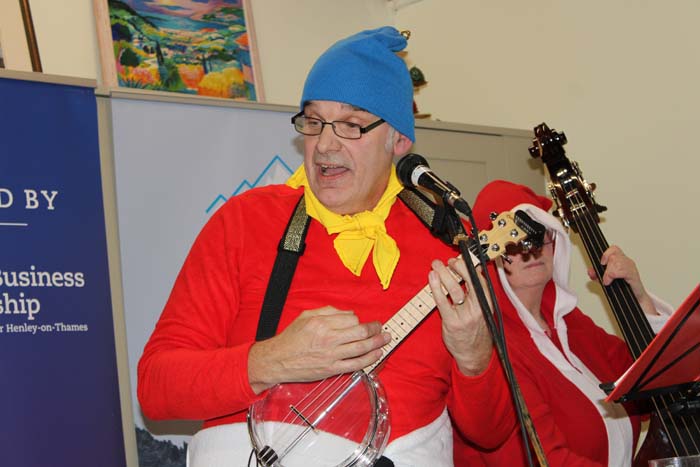 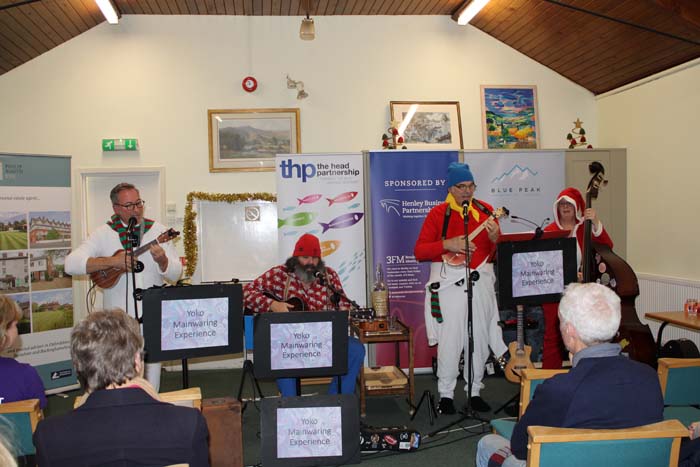 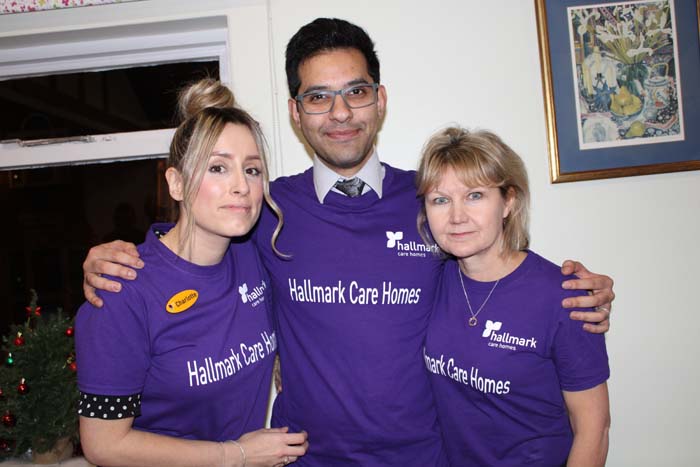 The bonkers band, Yoko Mainwaring Experience were the surprise performance on night 9 of the Living Advent Calendar at the Over 60s Social Club.

Members of the band have all played in different band names over the years of the Living Advent Calendar.  What’s behind this name?  Lead singer Martyn Eek Cooper said, “Well it is after the ‘significant other’ of an ex-band member.  Like Captain Mainwaring from Dad’s Army whose missus you never saw.  When he left, we put it down to her influence!” Pete McConnell returned to the band this year, after a sabbatical in Australia.  Pete said, “It’s been a few years since I’ve worn the snowman suit, I didn’t take it to Australia.” Martyn and Pete were joined by Mike Holland on the banjo and Lynnette Cossill on the double base.

The band opened their set with Shakin’ Steven’s Christmas classic, Merry Christmas Everyone.  This was followed by Santa Claus is Coming to Town.  The set also included the No 1 Christmas hit – Ernie (The Fastest Milkman in the West), Rockin’ Around the Christmas Tree and their own hilarious Christmas Donkey.

In between the songs, the band members told some very bad jokes including our favourite – Who hides in a bakery at Christmas?  A Mince Spy!

Even the costume change was fun – Mike started to take off his snowman costume, to add a blue hat and yellow scarf to become Noddy, before the band sang of course, Slade’s classic Merry Christmas Everybody.

Richard Rodway, Living Advent Calendar organiser said afterwards, “My Christmas is complete now.  It was absolutely Ernie that made it!”

Martyn added, “It’s a delight to be part of this community minded event.  It’s amazing and a lovely thing.  I encourage other communities to do it.  Henley’s very lucky to have it.”

The raffle on night 9 was in aid of the Over 60s club and the evening was sponsored by Henley Manor care home who provided refreshments.

You can catch a bit of Ernie below