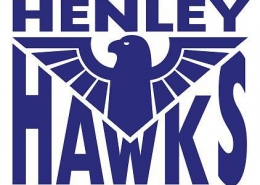 Henley produced a very solid performance to take the hosts unbeaten record and at the same time keep pressure at the summit of National League 2 South. Indeed, the score line flattered the Lions as Henley dominated territory and possession for long periods of the game. However, the Leicester defence was resolute at times and difficult to break down.

For the second time in a week Henley found themselves up against the odds as they lost fly half Alex Burrage after ten minutes to injury. After a hastily rearranged back line, Connor Morrison moved to fly half and Xavier Andre came on to add his experience to the midfield.

An early penalty for Leicester was quickly cancelled out as a dominant Henley pack took control and with some excellent driving play from the lineout Henley Number 8 and man of the match, Alex Bradley was driven over the line for a deserved lead. With their usual kicker off the field, hooker Brad Cook stepped up to make a successful conversion.

Henley continued to press hard, but a well organised and tough home defence kept Henley at bay. Time and time again Henley pressed but were unable to add any extras and entered half time buoyed by their first half performance.

Henley had coped well playing against the elements, and dealing with a smaller than usual pitch due to the main pitch being declared unplayable on Friday evening due to the incessant rain falling in the midlands.

The visitors started the second half in the same way. Their scrum was solid and lineout functioning reasonably well. This enabled a good platform to launch numerous attacks. Unfortunately, final passes went astray which limited the scoring opportunities. However, there were some good performances from the forwards, including David Hyde who had his best game for a while.

It was clear that it would not be long before Henley breached the resolute defence, and on 55 minutes numerous multiples phase brought about the inevitable penalty and kick to the corner. The resulting lineout was well-driven, and the resulting maul saw Xav Andre, who had joined the forwards, emerge with the ball to score what was to prove the decisive try, the reliable Brad Cook stepped up to provide the extras. With a score at 14-3 in Henley’s favour, the next score would be crucial. Once again Henley re-stablished themselves in the Leicester half and the influential Will Bordill was instrumental in winning the break down area.

Another drivivng maul from a line out looked to have produced that all decisive try. Indeed, whilst a penalty was awaded and a yellow card to the opposition scrum half for an illegal collapse just short of the line, many were surprised that a penalty try was not given. Unfortunately,Henley squandered the next opportunity and Leicester relieved their lines.

Indeed, this pre-empted Leicester’s strongest period of play as the they recycled the ball well to eventually outstrip a tiring Henley defence and score from midway out. This was their first visit to the Hawks 22 in the second half, with a successful conversion it was then again game on for the last 10 minutes.

However, it was Henley who finished the stronger as they saw the game out deep in the opposition 22.

A very satisfactory result against a physical and robust Leicester side who refused to succumb to relentless Henley attacks. A sad note was a serious injury to Connor Morrison with the last play of the game, everyone wishes him a speedy recovery after regaining his place in the side and playing an influential game.