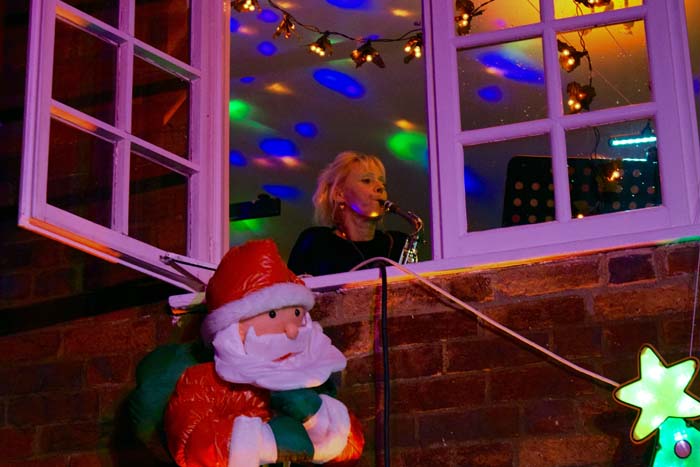 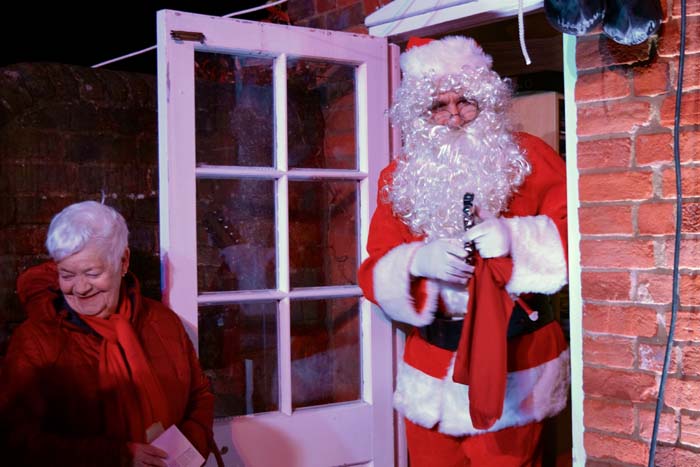 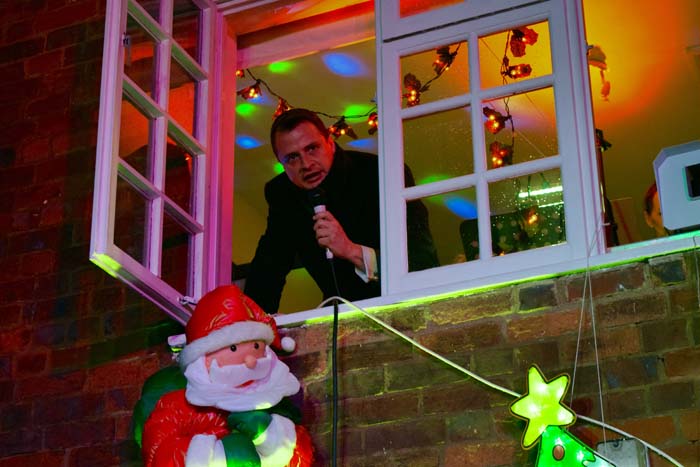 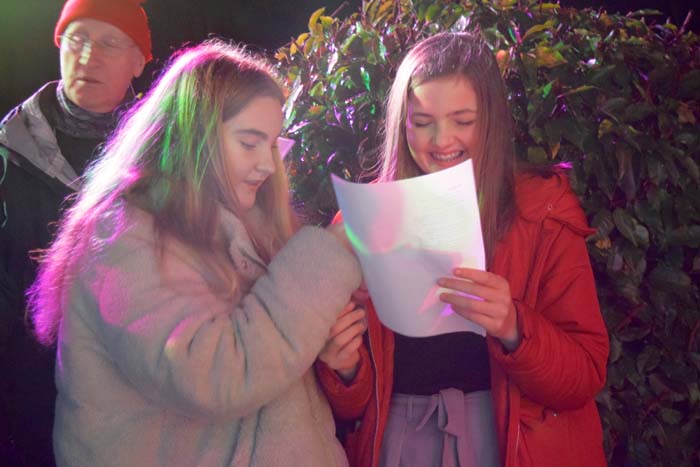 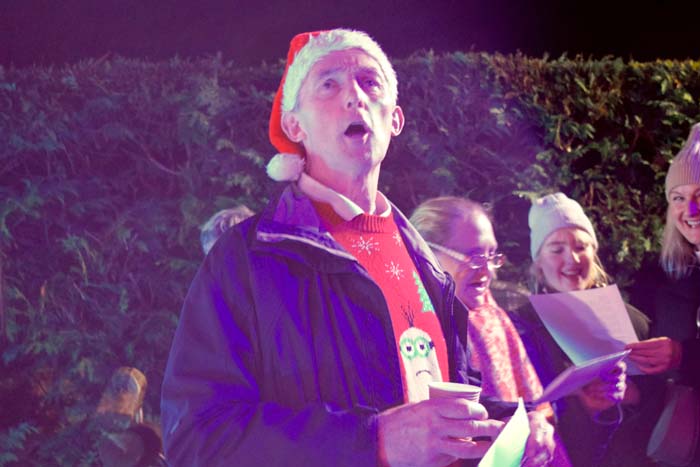 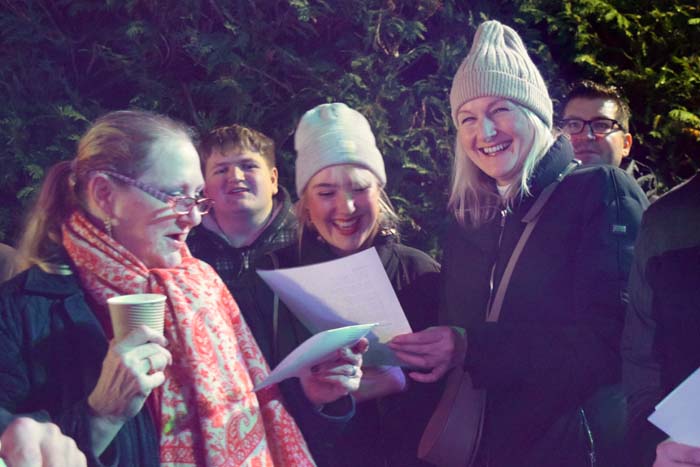 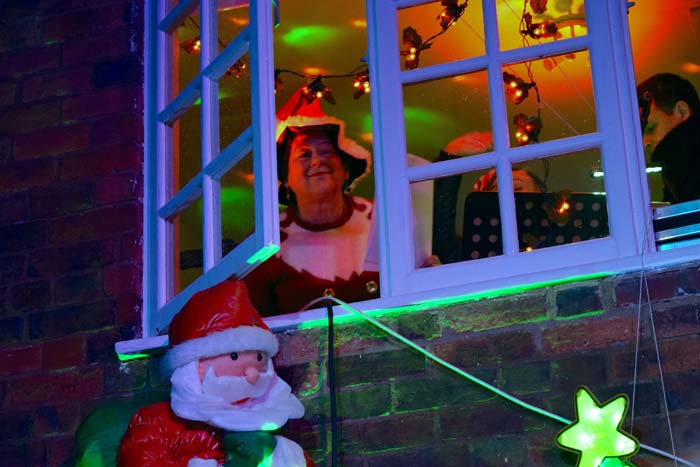 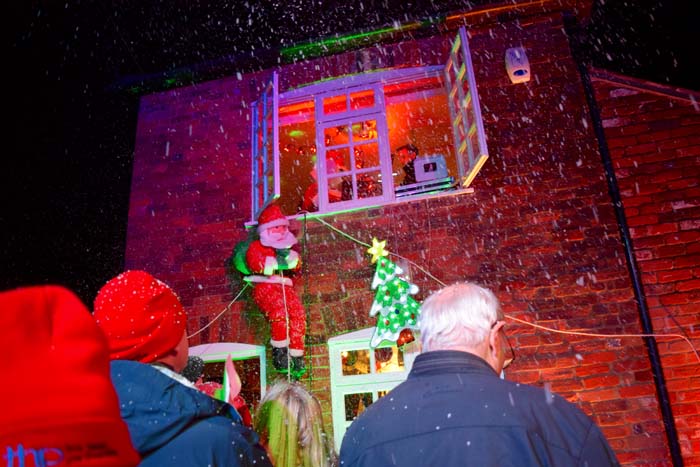 Living Advent Calendar devotees were in for a surprise on night 19 when a new act, The Laughing Ants, performed at Delegate House in Hart Street. The band appeared in the upstairs window of the building for their jazzy musical recital, featuring songs both festive and otherwise. Night 19 of this year’s record-breaking Living Advent Calendar was raising funds for Henley’s Regatta for the Disabled.

Night 19 of the Advent Calendar was supported by Delegate Office & Conference Services and GPC Marketing, combining the efforts of three Living Advent Calendar legends: Carolyn Molyneux (of Delegate) and Phil and Gill Chappell (of GPC Marketing). These seasoned Living Advent Calendar sponsors ensured an evening with all the bells and whistles: mulled wine, cider or apple juice to keep guests toasty; an epic spread of canapes and mince pies for the peckish; a table full of fantastic raffle prizes; and a snow machine for some extra Christmas joy!

Advent Calendar attendees gathered in the courtyard at the back of Delegate House for the The Laughing Ants’ mellow musical performance. Playing from the second floor of the building, the three person band covered instrumental versions of famous songs on a saxophone, ukulele and double bass. The trio opened their set with ‘Hit The Road Jack’, moving onto Sade’s ‘Smooth Operator’ before a rendition of ‘Fly Me To The Moon’. The song choice then took a more modern turn as the band covered Pharrell Williams’ ‘Happy’ and Camilla Cabello’s ‘Havana’. As the saxophonist took charge of playing the songs’ melodies, each track was made jazzy and smooth, creating a laid-back atmosphere in the courtyard below.

The band took the occasional pause to crack a joke, teasing that they were the ‘second best Spice Girls tribute band in Henley’ or that they had shined their shoes but couldn’t be seen from the ground below. Before their finale number, the group played two Christmas songs in order to ‘fulfill contractual obligations so that Richard will invite them back next year!’ The first was ‘Santa Claus Is Coming To Town’, which spectators did their best to sing along to even without the words. Thankfully, the audience had lyrics sheets for the next track — festive favourite, ’White Christmas’ — although some of the words did get a bit confused along the way!

After The Laughing Ants took a bow, the evening ended with one last singalong. Carolyn Molyneux led the crowds in belting out ‘Let It Snow’, sung so enthusiastically and convincingly that their wish was granted and snow did indeed fall from a snow machine in the first floor window. It was a magical moment that captured the magnificence of the Living Advent Calendar, and left the guests feeling thoroughly Christmassy!

Proceeds from evening 19 went to the Henley Regatta for the Disabled – Carolyn Molyneux’s choice in charity. Although they weren’t involved in the event, neighbouring business Hart Street Tavern allowed Living Advent volunteers to go in and collect donations from diners, adding to the evening’s fantastic total. As Richard Rodway proudly announced on Thursday evening, the 2019 Living Advent has so far raised 40% more money overall compared to the equivalent date in its previous highest year. Although the remaining dates before Christmas are now rapidly ticking away, there are still 5 days left of Living Advent Calendar fun to attend. Don’t forget your money for the raffle!