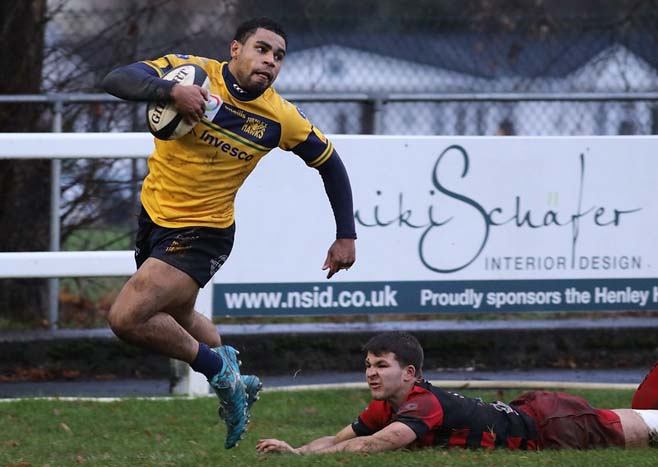 After much rain in the Henley area during the last few days, it was a sodden Dry Leas pitch that welcomed the two teams on Saturday. The Hawks secured a bonus point win but were made to hard in of seeing off a spirited and determined Old Redcliffians side who played far above their league position suggests.

It was a good win for the Hawks in conditions not suited to their style of play and found fluency hard to come by at times. Early on, the Hawks had no trouble in securing possession but often the ball was slow to appear from the breakdown and any momentum created was lost. Also, they tried some elaborate passing moves, often deep in their own half when a kick for position on a wet day would have been a better option and kept the visitors in their own half. That said, the Hawks never looked like losing, fought hard against awkward opponents and created more than enough chances to have won the game more comfortably.

One concern for the Hawks was the injury count, with three players this week, Will Bordill, Samir Kharbouch and Angus Hinton leaving the field with worrying looking injuries.

It was the Bristol side who made the better start, playing at pace and putting the Hawks in the back foot. A good move which involved some great handling from Dan Fry and Matthew Baker allowed Ed Boxall to cross for the opening try after just six minutes which Dominic Sprague converted.

The Hawks didn’t panic, responded well, and despite some slow ball, gradually began to take control with Ewan Fenley directing things from scrum half with Samir Kharbouch and Reuben Norville threatening in the backs.

The Hawks were finding it difficult to get any fluency into their play, but they gradually took control and scored two quick tries. A good run from Dave Hyde and a surge from Kharbouch gave Reuben Norville a chance wide out. He outpaced the Reds defence from some 30m and finished brilliantly to cross in the corner.

Kharbouch was looking like one of Henley’s main threats but shortly after scoring had to leave the field after a collision in midfield.

Shortly afterwards, it looked as though a Hawks attack had broken down but a the ball was kicked through and Jack Robinson won the race and gathered to score.

At this point, it looked as though the Hawks would pull away but the Reds were not to be outdone and responded well. After some good pressure, lock Chris Pursall crashed over for a try which Sprague converted to leave the Hawks just three ahead at the break, 17-14.

There were plenty of full blooded exchanges in the second half with the Bristol side contributing well to the game.

An early break from scrum half Ewan Fenley put the home side on the attack early in the half and Dave Hyde almost got over.

The Henley scrum was now in total control as the visitors began to tire and a good bullocking run from Alex Bradley almost created a try for prop Rory Mason who was held up over the line.

The Hawks eventually got their bonus point try when Alex Bradley showed great control at the base of the scrum. The Hawks pack demolished the visitors eight, pushed them back some fifteen metres and Bradley did well to control the ball and score. Wicks converted.

Another dominant scrum allowed Bradley to pick up and use the support from Fenley who put Norville over for his second try on the short side. Wicks converted from the touchline.

Old Redcliffians never gave up and made a great contribution to the game, fought to the end and deservedly had the last say with a second try for Ed Boxall.

This was a good win for the Hawks against difficult opponents and keeps them in second spot, just two points behind leaders Tonbridge.