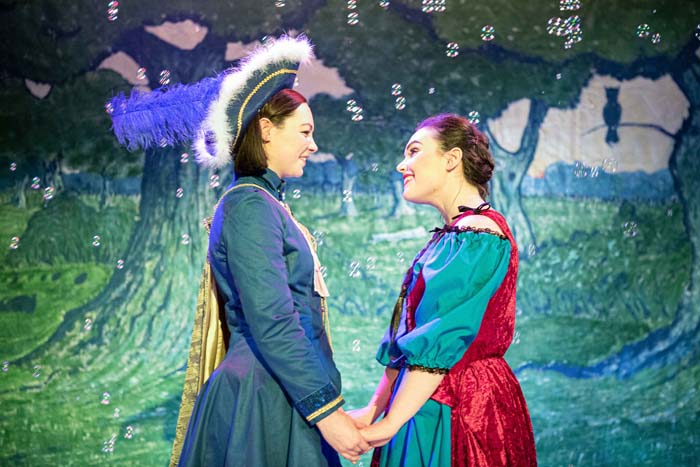 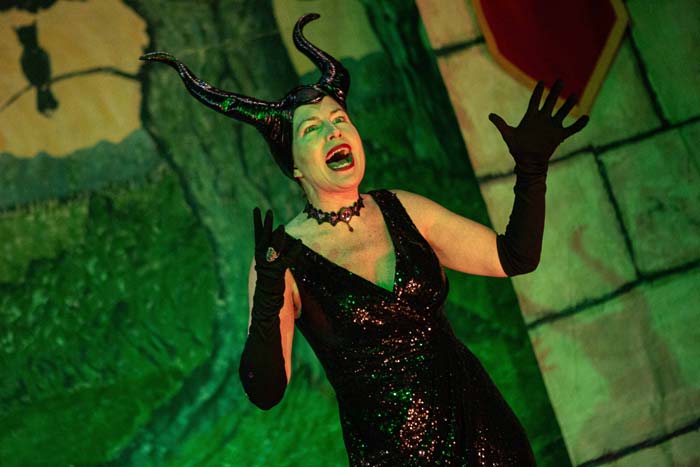 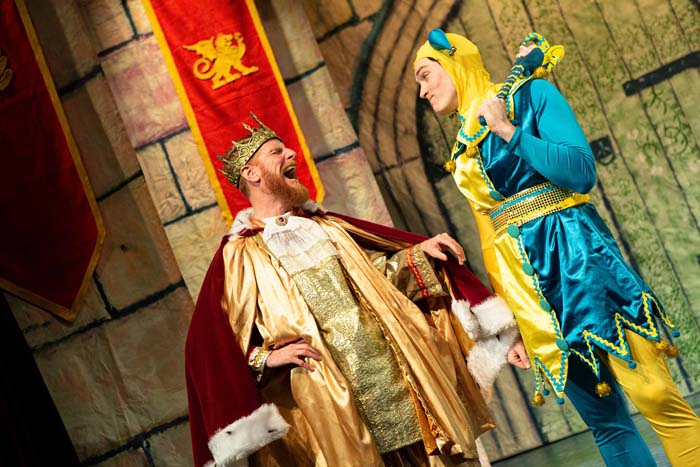 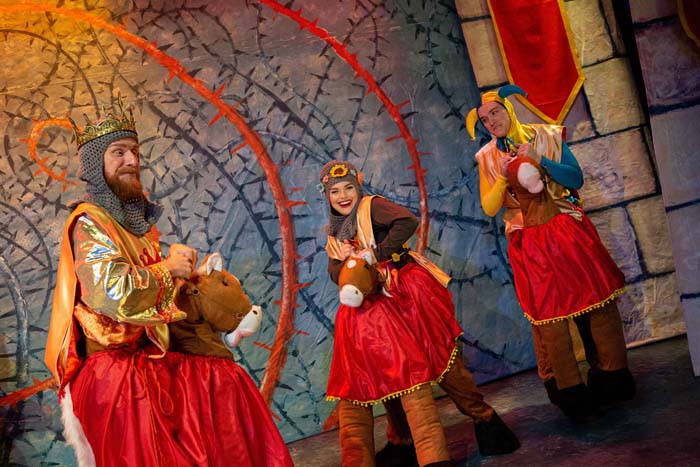 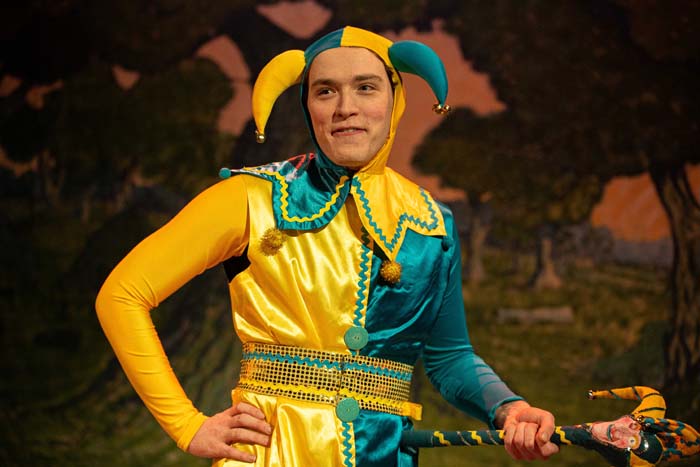 It wouldn’t be Christmas without a pantomime, and Bear in the Air have stepped up to the plate with their production of Sleeping Beauty. Now showing at the Kenton Theatre, the performance promises festive family fun with the obligatory dose of panto puns.

Sleeping Beauty has been written and directed by Heather Simpkin, the producer who first suggested a Kenton Theatre pantomime in 2012. As she recognises in the show’s programme, “being silly is a very serious business”, and indeed, audiences best prepare themselves for a seriously silly experience.

The tale is not unfamiliar, with its major plot points sticking relatively closely to the Disney narrative. Baby Sleeping Beauty is cursed by the evil Maleficient; she pricks her finger on a spinning wheel and falls into a deep slumber; and is heroically awakened by true love’s kiss. Also reminiscent of the famous films is Maleficent’s horned headdress, iconic and Angelina Jolie-esque.

A Disney story, however, it is not, its handsome princes and fawning princesses replaced with the ridiculous caricatures appropriate for a pantomime. The cast of six shift through a number of different minor roles, though each takes responsibility for a principle character. Betty Jones plays the show’s titular heroine, Sleeping Beauty, as pious and pretty as any princess should be. Arch-nemesis Maleficent is portrayed by Mary Stewart, who has her evil cackle down pat. Maleficent’s naive henchman, Number One, is played by Cole Dunn, who brilliants belts out the opening ‘ah-ah-ah’s of Led Zeppelin’s Immigrant Song each time his mistress steps on stage. Ross Telfer is the audience’s best friend as Jack the Jester, sharing the bulk of the painful pantomime puns.

The characters of the King and the Prince win the majority of the laughs with their expertly executed jokes and characterisation. Prince Gorgeous, played by Aussie actress Jessica Condon, gets plenty of humorous jabs at her (sorry — his?) homeland in, leading the audience in an enthusiastic ‘Aussie Aussie Aussie Oi Oi Oi’ call and response on more than one occasion. King Droopy Drawers was a Herald favourite; actor Paul Tonkin had the vocal variation, outrageous characterisation and pure silliness that makes a panto star stand out. Although, the crew members did their very best to upstage him, with Stage Manager Samuel Ranger making some amusing cameos the in pantomime’s most ‘meta’ moments.

As well as being characteristically self-aware, poking fun at the genre of pantomime itself, Sleeping Beauty includes the prerequisite pantomime gags. Panto fans will be pleased with the inclusion of the generic ‘oh yes is it/oh no it isn’t’ contest, jokes about Henley poshness, and a few jabs at predictable public figures – Katie Hopkins, Donald Trump, and Boris Johnson. Expect children screaming their heads off in the ‘it’s behind you’ scene, too. There is no escaping the audience participation in this show; the Sleeping Beauty script is constantly including the audience, and you can even see actors pacing down the aisles at more than one moment. A particularly funny scene sees the King push his way through the aisles and (spoiler alert) fall asleep on the patrons.

And naturally, what kind of pantomime would it be without its musical numbers? This year’s show has the exciting new addition of a live band — a nice touch, although the volume of the songs proves to be a little unbalanced. As the actors are performing without mics, they seem to be fighting to be heard against the band, and sometimes get a little lost amongst the noise. It’s a shame, as both singers and band sound beautiful when you can catch them. Despite the volume issues, the songs are energetic and entertaining, with dance numbers to match. Just when you thought the hype had died off, Sleeping Beauty includes not one, but two songs from The Greatest Showman — arguably the best numbers in the show, with A Million Dreams as the romantic meeting and The Greatest Show as the grand finale.

Even if slapstick isn’t your cup of tea, Sleeping Beauty does its best to cater for all senses of humour, with more than a few grown up jokes thrown in for good measure. It’s lighthearted, accessible and silly, and a serious consideration for your Christmas calendar.