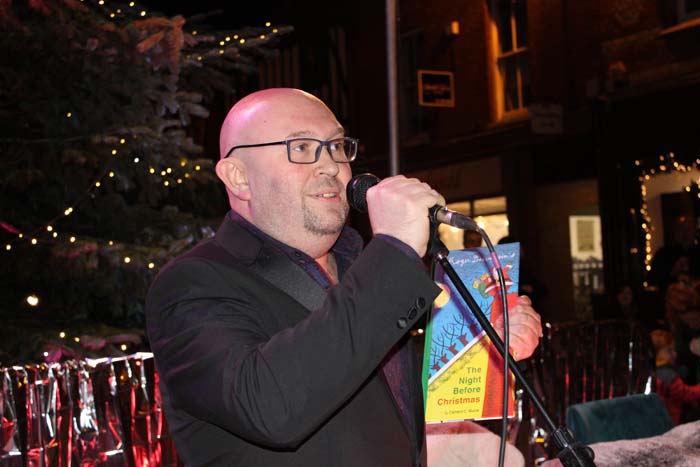 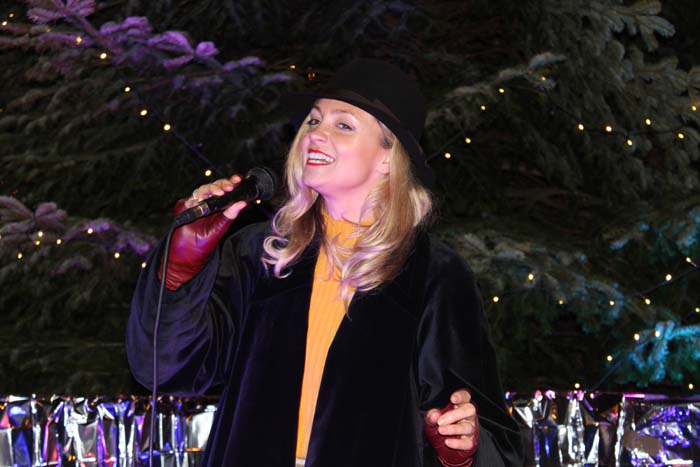 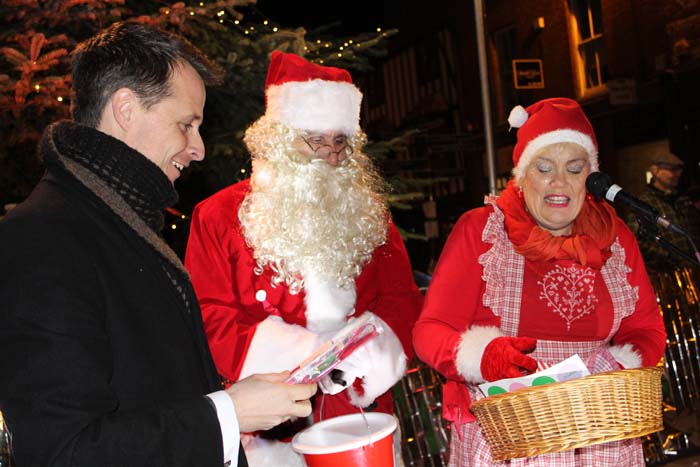 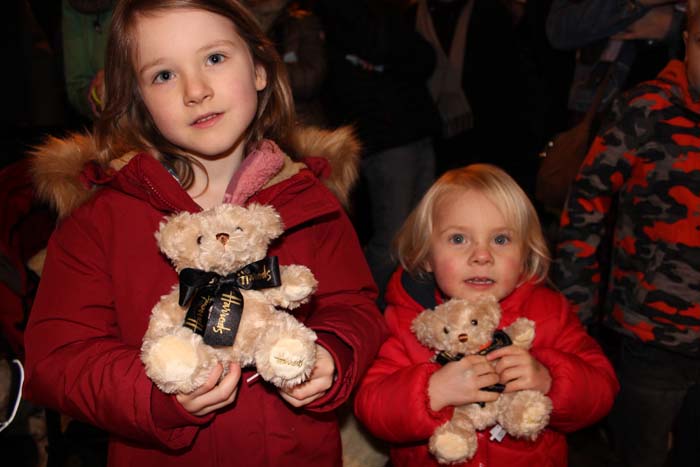 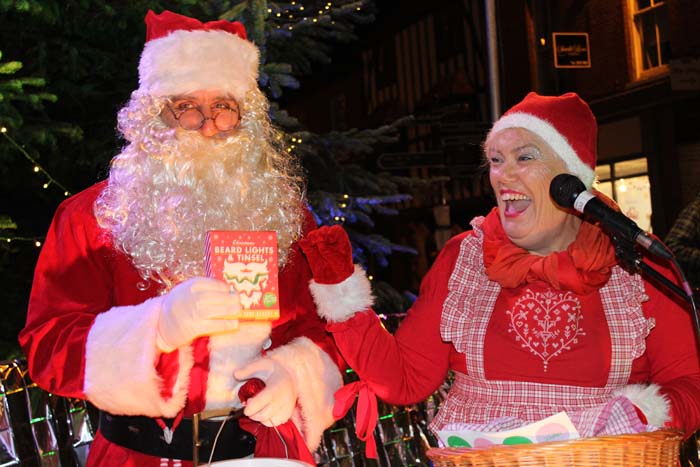 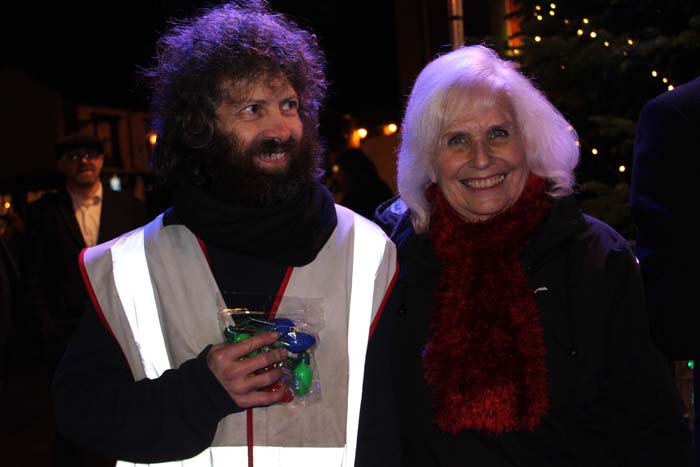 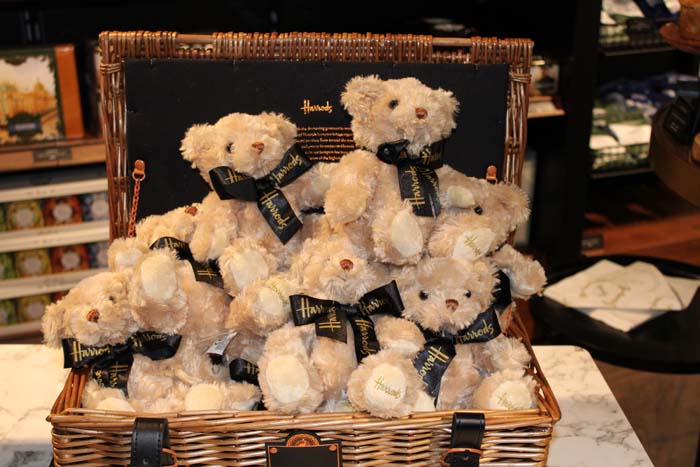 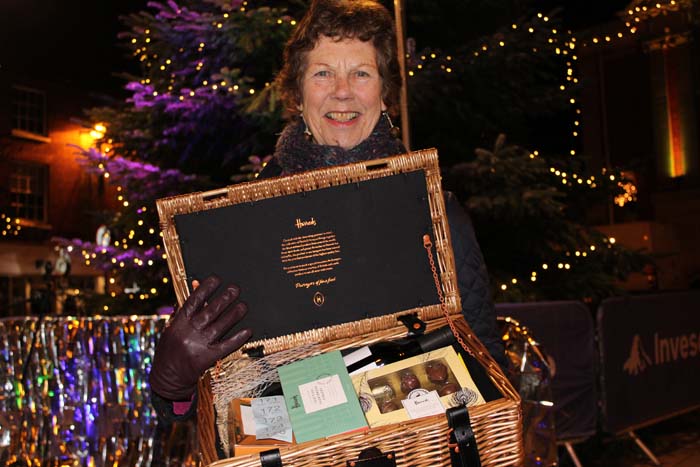 Twas a very special night for the Living Advent Calendar on night 23 in Market Place with Ricky and Leah Boleto, presenters of CBBC’s Newsround opening the show reading the story Twas the night before Christmas.

Perched on high chairs, Ricky and Leah’s young son Enzo joined them to read the story. We loved the part describing Santa, “He had a broad face and a little round belly. That shook when he laughed, like a bowl full of jelly!”

The evening was organised by former Henley Literary Festival Programme Director, Tom Ryan and Paula Price-Davies in partnership with the H Cafe.  Tom has been friends with Leah since they were at university together 15-20 years ago.  The couple travelled down from Salford near Manchester to come to Henley.  Leah said, “It’s been an epic journey to be here.  We knew about the Living Advent Calendar through Tom talking about it.  You know how Christmas is so busy we have never been able to fit it in but this year it just seemed to work and we could come down.  The story is a favourite of Ricky’s, a book that his Mum used to read to him when he was little.  Asked whether she was nervous, Leah replied, “No it was such lovely crowd and everyone was so friendly.  When it is family event, with our son on our lap, it was such a warm environment the nerves just melted away.”

Local singer/songwriter Purdy then followed who was joined by Matt Foster on guitar. She opened her set with Rockin Around the Christmas Tree asking the audience if they could “help her with the lyrics” and commenting “how pretty it is out here.”  With her sultry distinctive jazz voice, she then went on to sing one of her own songs followed by festive classic Walking in Winter Wonderland.

The evening’s raffle was raising money for the NSPCC and the top prize was a Harrods hamper which was won by Sheila Montgomery who was delighted to win after not winning anything on previous nights.  H Cafe were also giving out cut Harrods bears to children in the audience.

As is tradition, the Christmas Eve Living Advent Calendar performance will take place in front of St Mary’s Church starting at 6.15pm tonight.  The Living Advent Calendar broke its fundraising record for local charities on Saturday (21) of £5,800 with 3 days to go.  Come down and make it an extra special year, the money tonight is going to Mayor’s charities, Mencap, Nomad and Henley Music School.