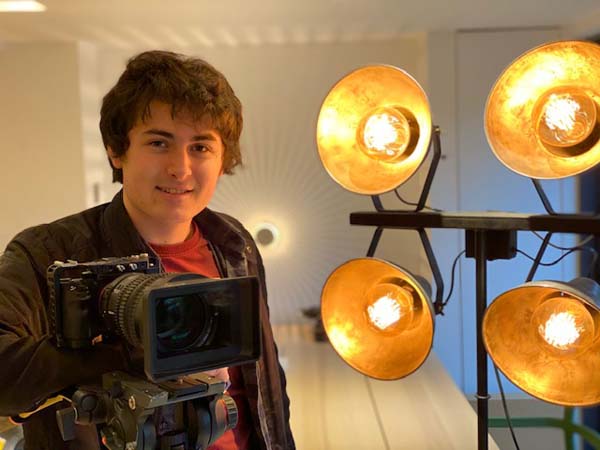 Young filmmaker and videographer Freddie Fox-Wilson has launched his own new business offering his video services to companies to promote themselves on their websites and social media.

Freddie, who grew up in Henley, went to Trinity School, Gillotts School and The Henley College where he studied photography.  He decided to go straight into work rather than go to University.

Freddie said, “I’ve been making films since I was 8 and I have won several Henley Youth Festival film competitions some of which have been screened at the Regal Picturehouse. I took an interest in ﬁlmmaking for the ﬁrst time with my childhood friend, we started making action thrillers, we used our handheld ﬂip cameras which we could lodge in places around our homes to ﬁlm both of us. Over the years we gained more equipment and began editing longer projects. I directed a series of action ﬁlms called the Contract and over the course of the series I was lucky to receive a DSLR camera which could be used for multiple detachable lenses, this gave my ﬁlms a very cinematic look. We continued to make these ﬁlms until we were 14.  My ambition is to one day make a feature film but in the meantime I want to make videos for companies that capture the real feel and atmosphere that a photograph can’t capture.”

Already, Freddie has completed some videos for local gastro pubs, hotels and restaurants including The Hart Street Tavern, The Bull on Bell Street, The Cherry Tree in Stoke Row and the Three Tuns.  Last year Henley Festival also gave Freddie a press pass to capture the 2019 festival atmosphere and Phyllis Court Club asked him to film the Club being prepared for Henley Royal Regatta.  He has also worked with The Creative Duck to record some of their events. His latest video project was for Henley Town Council to film the Christmas Festival.

Freddie is also very interested in telling people’s stories, making personal portraits using ﬁlm footage and/or photography. Freddie said, “I was inspired when I was about 14, I put some photographs together of the life of my grandmother through the ages as a biographical picture set to music. It was so moving, that by the end of the ﬁlm, all the family were in tears.”  He was then asked to make more portraits for other grandparents and other family members’ landmark birthdays.  They have all had the same impact, moving the audience to tears of joy and sadness.  Freddie added, “On one occasion he’d been commissioned to make a surprise video of a collection of photos of a 70 year old family member, celebrating her birthday in a restaurant in the Spanish hills, the ﬁlm was played to her surprise.  Freddie added, “The entire restaurant was weeping, including the waiters who hardly knew her! This ﬁlm was played at her funeral, it portrayed everything about her life and something that the family can keep forever as a memory.“

Inspired to take the idea of photographs one step further, Freddie is making personal portrait ﬁlms of individual’s life works.  Last year he made a ﬁlm about Andrew Ingram at the Tree Barn in Christmas Common, about his life growing up on the farm and the story behind the success and growth of his thriving Christmas tree business.  Freddie said, “It’s a very moving portrait set to music and visually very ﬁlmic, including drone footage of the farm set to the perfect score.”

If any business owner has a story to tell or a product or establishment to promote, Freddie is offering Henley locals a special package discount for their website or Instagram/Facebook clips that can be updated through the year (keeping social media fresh).  As Freddie is independent and directs and edits himself, this keeps the cost down compared to corporate video production companies.

To have a look at Freddie’s films, please take a look at his Vimeo page https://vimeo.com/freddiewilson