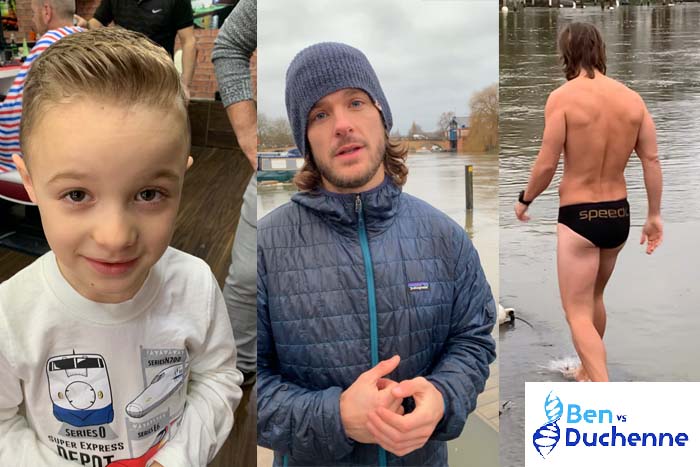 Stefan Gyoker is challenging himself to raise £3,000 for Ben Clarke who is six years old and has Duchenne Muscular Dystrophy to pay for essential adaptations needed to make his home accessible through 12 difficult challenges (one a month) throughout this year #12in12forBen.

Duchenne Muscular Dystrophy is an incurable genetic disease that causes progressive muscle weakness and wasting.  Ben, who goes to Trinity School is the son of Stefan’s good friends Lisa and Alex and is known has Uncle Stefan to Ben. Stefan said, “When he was 4 years old, Ben’s family were given the life-changing news that Ben had Duchenne. Duchenne is a severe, progressive and currently terminal disease and currently there is no cure. It is a truly heart-breaking condition, in which previously physically able children experience gradual and permanent wasting of their muscles, eventually rendering them unable to move. Those affected require a wheelchair by 10 -12 years old and usually die by their late teens or early twenties as their heart and breathing muscles become affected. I can still remember the exact moment when Lisa and Alex told me the news and I can’t begin to imagine how difficult it’s been for them to come to terms with.”

Stefan will be wearing his trademark Speedos for the challenges! For his first challenge in December he kicked off with a short swim in the very cold and fast flowing river in Henley.  His other challenges will include the Club to Pub Swim, Thames long distance paddle boarding, half marathons and Tough Mudder.  He said, “The hardest challenge 100% will be the swims. When I was 4 years old I almost drowned on holiday in France and had to spend a week in hospital so physiologically water is big challenge for me and I don’t feel comfortable in it at all.  The only thing I’ve done before is about 7 years ago I ran a half marathon (and vowed never to run one again!) but other than that I’ve not done anything like what I’m attempting this year.  I haven’t done any special training but I’ve been blown away by the support that everyone in the local community has already given me. Henley is obviously a sporting town but it’s crazy how many ex-Olympians we have living here!”

Most people raise money through just one challenge.  Stefan explained, I wanted to do 12 challenges to really try and maximise the donations and the viability of Ben’s cause. A lot of people do a marathon or a Tough Mudder (which is great of course) but not many commit to doing a number of events in one year.”

Stefan has known Ben’s parents for almost 10 years, he said, “They were really welcoming to my wife and I when we first moved to Henley. They’ve grown to be great friends and Ben was born within a couple of months of our own son so they’ve grown up together. I can’t think of a more deserving family to raise money for.”  Ben’s parents Lisa and Alex said, “We were absolutely blown away when Stefan told us. Not only by the target set for fundraising but also what Stefan is putting himself through to raise the money.”

The £3,000 will make such a difference to Ben’s life.  Lisa and Alex added, “Our whole house needs to be made accessible, this means changing the whole downstairs of our house. Changing a downstairs room into Ben’s new bedroom and wet room. This money will help us make it a room he will love. The ability to get to and from his own space with ease and not have to struggle or be carried up or down the stairs. The independence he deserves, as any young man would want.”

Stefan’s February challenge will see him do a 15km night-time trial run just outside of Henley in his Speedos!  As well as looking for personal donations to help meet the target, Stefan said, “If any local business want to help promote the fundraising I’m doing then please get in contact. We have some great businesses that could really raise the awareness and I’m very open to displaying company names on my (albeit very small) Speedos!” Laurence Menswear raised £600 towards the target from their mulled wine and cake at the Christmas Festival.

To donate go to https://www.justgiving.com/crowdfunding/12in12forben