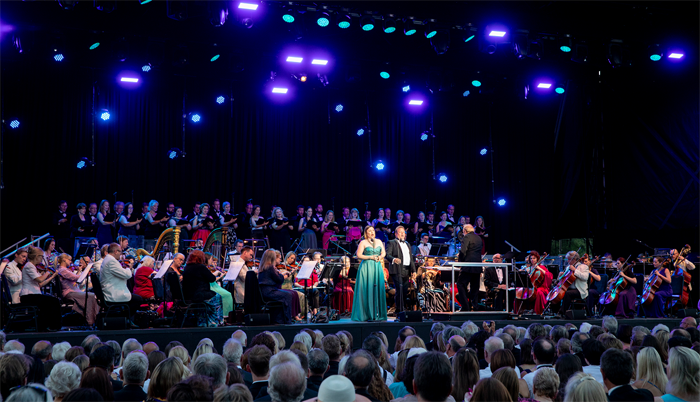 Last week, Henley Festival announced that the Sunday classical evening will be celebrating Britain’s military heritage. We caught up with new Henley Festival Chief Executive, Nick Mattingley about this first announcement under his new reign.

The evening, ‘A Classical Salute’ will celebrate the power and glory of one of our finest orchestras and the theatre of the military around the world.  It will see over 100 performers on the floating stage.  The Royal Philharmonic Orchestra will be joined by a string of military musicians including Ceremonial Trumpeters for Verdi’s Grand March from Aida, a band of Military Drummers for Ravel’s Bolero as well as uniformed pipers for Highland Cathedral by Roever. The orchestra will also be joined by internationally acclaimed soloists violinist Benjamin Baker and mezzo soprano Phoebe Haines.

Nick said, “We sat down with Nigel Gray (founder member of our Classical Club) and we batted a few ideas around. One of them that came out was that we should exploit the river and there’s nautical feel about it.  And that’s when a thought came into my head that a military element could be interesting and with my background of working on the British Military Tournament I fed into the discussions and suggested something with a military feel.”

Nick put Lt Col Graham Jones, former Director of Music Household Division and Director of Music Coldstream Guards in touch with Stewart Collins the Festival’s Artistic Director.  Nick commented, “They had a chat to see if it was possible and they kind of dreamed up the programme.  They came up with it collaboratively and it is bespoke for the Henley Festival.  Working closing together they have put together the basic dots and there’s more we hope to build on including some magic which will be a surprise and delight to the audience. We are obviously conscious of the VE commemorations this year and wanted to link into that.  It’s going to commemorative, we are trying to be evocative and there’s an emotional under current we want to play on.”

The Classical Club was formed by the Henley Festival under the guidance of Emma Lerche-Thomsen, the Festival’s Membership Development Manager in 2019 following interest from individuals who wanted to see the heritage of Classical music return to the Festival.  The members of the club are passionate classical fans and it was through their determination and generous donations that the classical evening has been saved. Nick said, “Without the Classical Club the evening probably would have disappeared. I want the classical night going forward to be self-sustaining.  It should be a workable programme and the measure of success will be that we don’t need to go back to the Classical Club for more and it’s standing on its own two feet. We can grow the Club through its own success and this should manifest itself.” Individuals can support the Classical Club from as little as £500, all details are on the Henley Festival website or contact Emma Lerche-Thomsen directly on emma.lt@henley-festival.co.uk

The classical night moved to Sunday night last year, is this now fixed?  Nick explained, “We have to be flexible with the programme. With the other floating stage artists it is down to the artist’s availability. None of the nights are fixed and the classical night doesn’t have to always be on the Sunday – it is at the behest of the other artists.”

The Henley Festival started in the early 80s as a classical music festival. It has grown after the last 10 years to have a mixture of music genres.  Nick commented, “As a music festival we want to be providing a diverse programme and classical is very much part of that. It is part of our heritage and it would be a crying shame to lose it which is why we are fighting tooth and nail to provide a programme that people will buy into.  If we can grow that audience and make it what it should be into a busy, celebratory and a fantastic night.”

The rest of this year’s Festival programme (8-12 July) will be announced on Wednesday 29 January.  Tickets go on public sale on 6 February www.henley-festival.co.uk