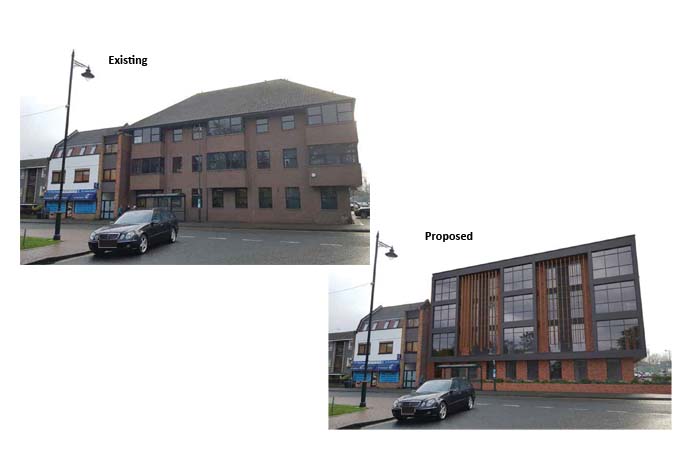 Ressance Limited are appealing against South Oxfordshire District Council’s decision to refuse the planning application to extend The Hub (Hallmark House) on Station Road to add an additional floor for five apartments.

Under the Permitted Development Order, Ressance were given permission to convert this office block into 23 apartments (4 x 1 bed, 17 x 2 bed and 2 x 3 bed) in May 2018.

In October 2018, Ressance submitted the planning application to add the additional floor with six apartments.  At the Henley Town Council Planning Meeting, Chair Councillor Ken Arlett confirmed that their observation to SODC was that the application should be refused and  commented, “The application is out of character near a conservation area. Not sympathetic to neighbouring buildings by its bulk. Height which would be over 2.5 metres above existing property. The development would be over looking neighbours and over powering. Thought the design would be better on an industrial estate.”

Revised plans were then submitted in December 2018 and in May 2019 with one of the apartments removed and the latest revised plans showing alterations to the building form, removing part of the parapet wall nearest the Imperial Hotel and greater set back at top floor accommodation. Creation of live/work meeting space at ground floor level and relocation of bike store to the rear of the building. Extension of side bay window area and addition of timber fins. Alterations to fenestration detail at ground floor level.

Despite 27 objections by neighbours which included loss of light, privacy, noise pollution and the building is ‘out of character’ the SODC Planning Officer, Simon Kitson recommended that the revised planned should be approved in September 2019.

South Oxfordshire District Council refused the planning application and stated in the refusal notice “The development by virtue of its visual bulk and massing would appear out of character with the surrounding area and it would have an incongruous impact on the street scene, failing also to respect the special historic character of the adjacent conservation area. The development by virtue of its massing  and height would also have an un-neighbourly and harmful impact on the amenity of the occupier of 18 Station Road and the occupiers of Hewgate Court.”

An appeal has been made to the Secretary of State and will be carried out by written representations and not a public enquiry and the deadline for these is 6 February 2020.