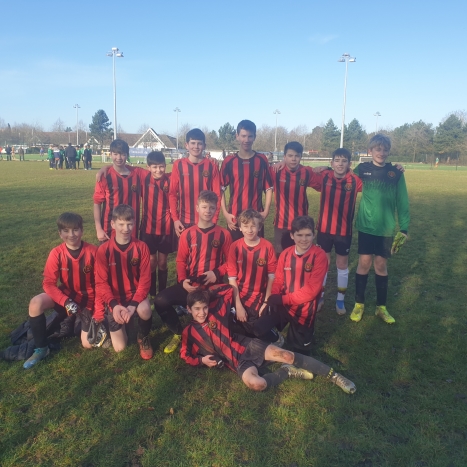 The U13 AFC Henley Hurricanes ran out 5-1 winners against Eldon Celtic in this last 16 match of the East Berks FA Cup.

The Hurricanes slept walked into the start of the game however and quickly found themselves 1 down as Eldon were gifted the freedom of the Hurricanes penalty area and made no mistake from 10 yards out.

The Hurricanes looked shell shocked at the early physical onslaught and struggled to cope with the size and combativeness of the opposition.

As the half went on though the hosts started to get a foothold in the game and it was Finnbar Scott who muscled his way through the Eldon defence after Harvey Herbert slipped him through and Scott poked the ball home after showing great strength to hold off two Eldon defenders.

Ben Horner, in the home goal, had to be at his best to keep the scores level as he pulled off a great save to push an Eldon effort round the post for a corner which came to nothing.

Henry Mendelssohn was proving a competitive force in the centre of the Hurricanes midfield as his skilful footwork and eye for a pass was to prove vital. Creating time and space for himself in a fashion Patrick Viera would have been proud of he spotted the run of flying left winger Sam Robinson and released him with an inch perfect pass. Robinson needed no second invitation to stretch his legs and he glided past three Eldon defenders before calmly slotting the ball past the keeper.

Joe Winpenney was playing a key part in the Henley back line and he had to make a key intervention to stop an Eldon attack. This gave the hosts confidence and in particular the Henley defence was now looking more assured as they realised they could compete with the Eldon front line. Captain Luca Thomson was using his strength to see off the tricky Eldon number 9 whilst sweeping up behind him was the assured Oliver Saunders. Indeed, late in the half Saunders had to make a key header which prevented a one on one chance for the visitors and meant that the Hurricanes went into half time 2-1 up.

The hosts started the second half nervously though and right back Tom Bonser needed to be at his resolute best to stop the significantly larger Eldon winger he was up against. On the opposite side of defence Henry Steel had to prove he was made of exactly that as he was clattered into by the Eldon right winger but he stood firm and defended bravely. Ethan Hollliday was also proving to be a key member of the Hurricanes midfield as his shielding of the back 4 was key in snuffing out any Eldon attack.

This solid defensive base let the Hurricanes creative midfielders work their magic and Joe Turner unleashed a fierce drive from 25 yards out that he was unlucky not to see break the back of the net as the visiting keeper made a stunning save. Turner was not to be denied though and he set Robinson free in the inside left channel and again Robinson went on one of his trademark mazey dribbles that ended with a calm finish inside the near post to make it 3-1.

Tom Yeoman was beginning to find his rhythm down the right flank and he cut inside dangerously only to see his shot well saved.

Confidence was now brimming in the home side and Herbert, who had scored a hat trick last week, was using his pace and power to turn creator as he played in Tom Atkinson who made no mistake from close range with a predatory strike.

More of the same was to follow as Herbert notched a hat trick of assists as he again played in Atkinson who wrong footed the keeper with a cheeky finish and completed the scoring as the Hurricanes secured a 5 1 victory and a place in the last 8 of the Cup.

Managers Turner and Atkinson were said to be delighted by the bravery and commitment of the squad and were now looking forward to taking on old adversaries Ascot next Saturday.