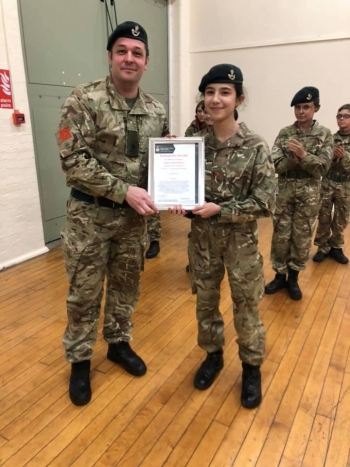 Henley Army Cadet Jasmine Barrow put her into first aid skills into action, when a car had overturned in front of her. Jasmine was awarded with a National Praiseworthy First Aid Certificate.

Cadet Barrow age 14, has only been a cadets for a year. As a part of Army Cadets, the cadets undertake a variety of training, including first aid. Five weeks after her Youth St John’s Ambulance First Aid Course, Jasmine was travelling with her mother when the car in front had overturned. Jasmine called 999, liaised with the emergency services whilst reassuring the people in the car.

In the Army Cadet Force such actions can be recognised by a National Praiseworthy First Aid Certificate. This is a rare award, where her actions were put in front of the committee to decided whether this award was fitting of her actions. Cadet Barrow was found worthy and was presented a Praiseworthy Certificate by Major Thrussell her Company Commanding Officer.

The Praiseworthy citation read “Cadet Jasmine Barrow and her mother were travelling in a car through Sindlesham when the car in front crashed and flipped over. Cadet Barrow immediately announced to her mother that she (Jasmine) was a first aider and she needed to help. She called 999 whilst walking rapidly to the over turned car. Cadet Barrow assessed the danger such as the risk of fire as the car was overturned. Luckily, the people in the car had survived and had no obvious injury. Cadet Barrow reassured them whilst liaising with the emergency services.”

Cadet Jasmine Barrow from Henley Detachment said. “I was very surprised to be recognised for my actions, I just wanted to help the people in the overturned car the best I could.”

Major Thrussell the Company Commanding Officer said “This award is very rare and it’s an honour to be able to present this, I’d like to congratulate Cadet Barrow, she is an example to all”

The Army Cadet Force is a national youth organisation sponsored and supported by the Ministry of Defence for 12 to 18-year olds. Army Cadets provides a challenging and varied syllabus based on military themes. Henley Army Cadet Force parade every Wednesday from 1900 to 2130 at The Drill Hall on Friday Street. We are currently looking for new Cadets and Adult Volunteers, feel free to come along and experience something new. For more information please email Detachment Commander AUO Mel Haynes on 3360hayne@armymail.mod.uk