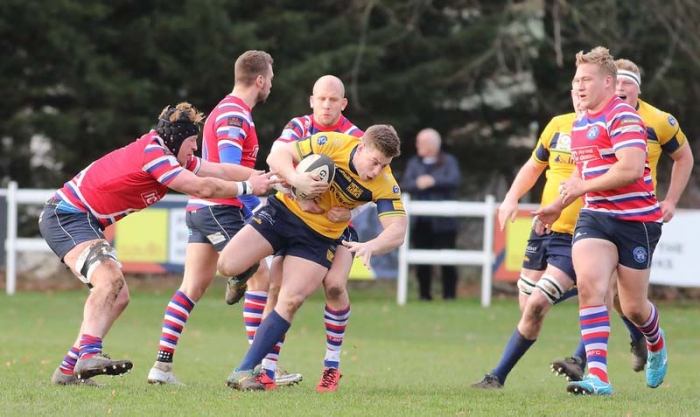 In the battle between the top two teams in the league, Henley Hawks missed a chance to go back to the top of the league on Saturday when they lost a tight game against current league leaders, Tonbridge Juddians, despite leading 17-6 at half time.

It was a tight game, with both teams totally committed to the cause, but it was the visitors who showed better game management, especially in the second half, that saw them home.

The Hawks will again be frustrated as they have been in this position before against Redruth and Clifton, both at home, earlier in the season. That they lost a comfortable lead, couldn’t find a way to see the game out or make the right decisions at crucial moments will be worrying for the Hawks but as coach Luke Allen said after the game, “ there are still nine games to go, the season isn’t over and we are still bouyant.”

Cheered on by a large travelling support, it was Tonbridge who opened the scoring after just two minutes with an early penalty from ex Hawk Will Robinson, but it was the Hawks who had the better of the first half, trying to play an open game and putting pressure on the visitors defence.

The exchanges were fierce but the Hawks forwards began to gain some momentum in the loose and after good drives from Dave Hyde and Sam Lunnon, Brad Cook was on hand to take the final pass and charged over for the Hawks first score. Ben Bolster converted.

Robinson and Bolster then exchanged penalties before the Hawks took the initiative.

Ewan Fenley controlled the game from scrum half and Reuben Norville was a constant threat from full back.

A strong Henley defence forced the visitors into some unforced errors giving Jack Robinson a chance to exploit some space. This gave Brad Cook the chance to break clear and a good reverse pass saw Alex Bradley scamper over under the posts. Bolster again converted.

The Hawks defence was called into action again straight from the restart as the home side was penalised allowing Tonbridge to attack from a line out close to the Hawks line. The driving maul was stopped by the Hawks and they cleared upfield.

Just before the break, the Hawks missed an opportunity to go further ahead when they opted for a scrum under the Juddians posts instead of kicking three points. The attack broke down and so the Hawks went into the break 17-6 ahead.

There was a stiff breeze blowing down the ground and Tonbridge managed the conditions brilliantly in the second half, keeping the Hawks pinned in their own half for long periods. Indeed, the Hawks failed to score at all in the second period.

Gradually, the pressure mounted and after a Hawks move broke down in midfield, Finlay Coxon-Smith outpaced the Henley defence and fed wing Hugo Watson to cross for the visitors. The conversion was missed but the signs were becoming ominous for the Hawks as they struggled to get any foothold in the game.

The Juddians we’re enjoying all the territory and possession and came close a number of times. Also, the visitors scrum was totally dominant by this stage and after some continuous pressure on the Henley line, Tonbridge won a penalty try on the hour. The Hawks scrum fell apart under extreme pressure and the referee had no option but to award a seven pointer to put the Kent side in front.

The Hawks were committed to the end but Tonbridge kept Henley in their own half for the rest of the game and despite the Hawks best efforts, the visitors easily saw the game out.

Hawks head coach Luke Allen was disappointed afterwards.” I’m heartbroken for the players. You couldn’t fault their effort and commitment but we weren’t clever enough in the second half. TJs kept the ball well and we had to defend for long periods.”