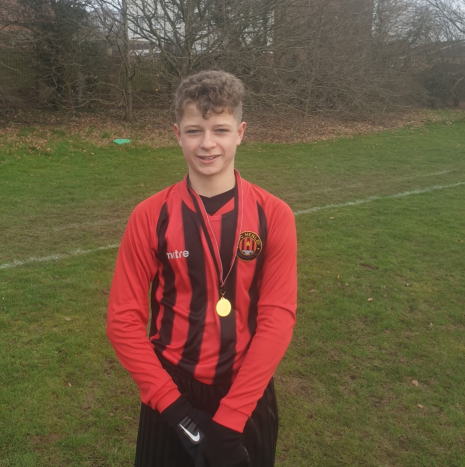 The U13 AFC Henley Hurricanes drew 1-1 away at the Bracknell Cavaliers in this East Berks Division 1 game.

In what was a controversial game that threatened to boil over at times the Hurricanes can consider themselves mightily unlucky not to have come away with the 3 points.

The visitors started the game well and it was Man of the Match Ethan Holliday who should have opened the scoring. Holliday made a great run cutting in from the left and hit a thunderbolt of a shot that smacked against the underside of the bar and appeared to cross the line. However the referee waved played on as the Hurricanes were cruelly denied the opening goal.

At the other end of the pitch Captain Tom Yeoman was marshalling the back line in a fashion Tony Adams would have been proud of as the hosts were reduced to taking long range shots. Olly Saunders was Yeoman’s centre back partner and he too was key in keeping a clean sheet in the first half. The back line were being greatly aided by the defensive work of central midfielder Joe Turner who made a number of tough tackles and key interceptions to keep the opposition at bay.

It was left to Harvey Herbert to open the scoring for the Hurricanes as he burst onto an exquisite through ball by Henry Mendelssohn. Herbert drove into the Bracknell penalty area and despite the keeper getting a hand to the ball there was no denying that the visitors had opened the scoring this time as the Hurricanes took a one goal lead into the break.

After the break it was Matthew Dippenaar who came to the rescue for the visitors making one superb goal line clearance before making a key tackle deep inside his own penalty area. Ben Horner in the away goal in truth had little to do. However he was called upon to make one save as he had to be at his athletic best to tip a fierce shot around the corner.

More controversy was to follow though as Herbert hit another shot goalwards that the keeper got a hand to but seemingly could not prevent from crossing the line. However yet again the man in the middle saw fit not to give the goal as the Hurricanes frustrations grew.

Joe Winpenny combined well with Sam Robinson down the left and Robinson was unlucky not to score with a good shot that drew a fine save from the Bracknell keeper.

Morgen Wynn-Jones, returning from injury, was a constant threat to the opposition. He combined well with Tom Atkinson to set Atkinson up for a chance that took a good block to deny the Hurricanes the second goal that they always looked like they would need to secure the 3 points.

And so inevitably it came to pass that Bracknell would score the equaliser as a rare attack for the home side resulted in a shot that Horner could do nothing about.

The match then degenerated into a physical affair and to be fair to the Hurricanes they stood up for themselves and dug in for a point when really they deserved all 3.

Managers Turner and Atkinson were said to be proud of the boys’ attitude and performance and were now looking forward to taking on local rivals Twyford in what promises to be a lively derby a week on Saturday.