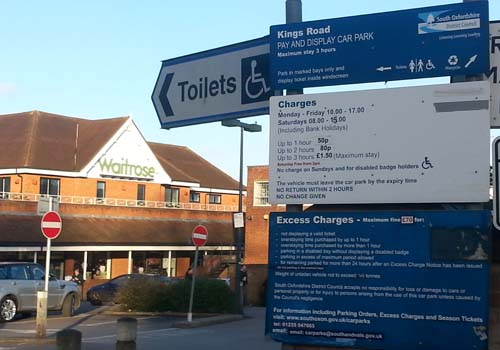 A report to support the decking at Kings Road car park written by Town Clerk Sheridan Jacklin-Edward was discussed at the Henley Town Council Planning Committee meeting last week.  The report is to be presented to SODC who own the car park and have asked for an evidence based approach to address SODC concerns and to show that there is a greater need in Henley than anywhere else in the District.

The issue of parking provision in Henley is longstanding, as are concerns over congestion, air quality, vehicle emissions, and the vibrancy of the town centre. Plans for expanding parking were initially drawn up in 1995 and capital funds were earmarked for a scheme in 2016. The South Oxfordshire District Council Core Strategy (SODC, 2012) recognises congestion in Henley as a concern, and figures as far back as 2013 (SODC, 2013) show car park occupancy at SODC car parks at close to 100% at peak times. The report backs up the proposal with research on the impact on air quality when cars are circling car parks and why people want to use their cars over public transport.  It also explores park and ride, better signage and increase in tariffs.

SODC commissioned a feasibility study in 2015 which Sheridan states in the report fails to address the factors and the conclusions of high financial costs, potential disruption, and only a modest increase in space are flawed.

The proposed scheme would see an additional 68 car parking spaces built with factory-built decking in modular steel sections and supporting columns.  The decking location will be set back downhill from the nearest houses and screened by existing mature trees and garden walls ensuring that the visual impact for neighbours will be minimised. The decking could be equipped with solar panels and electric vehicle (EV) charging points. The net gain in spaces would also enable SODC to increase the number of EV charging points, car club spaces, and disabled parking spaces across the site.

In the proposal the timescale for construction phase is estimated at 3 months from when materials arrive on site. During construction, it is estimated that 50% of the car park would be able to be kept open.

The total anticipated cost of the project is £1m to £1.2m. The work could be funded through SODC reserves, or through a loan from either another local authority or the Public Works Loan Board (PWLB). Taking the option of the a PWLB loan of £1m at the current interest rate of c.2.5% per year taken out over 15 years, there would be a total cost of £1,200,000, and repayments of £80,000 per year. Current annual income from the Kings Road car park is c.£390,000 to £400,000 per year, with estimated income for the decked area at £80,000 per year.  Therefore, if there were no changes in the current parking tariffs or tariff structure, the proposal would pay for itself in 15 years, with no detrimental impact on the District Council’s reserves.

The Town & Community Manager, Helen Barnett, reports that “retailers are feeding back that reduced footfall is becoming evident and deterring independent retailers, who are working hard to keep the town vibrant and occupied. Retail is facing its most challenging time in history and a lack of available parking is exacerbating the already precarious situation.”

It was agreed to take the retailers view from the minutes of the retailers meeting and the full car park decking report to Full Council for further consideration and full Councillor input on 18 February.