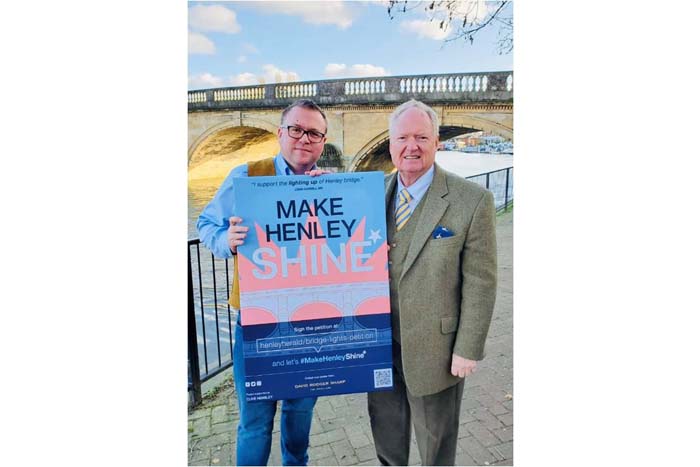 After a very successful public meeting about the lighting up of Henley Bridge permanently, a campaign is now under way ‘Make Henley Shine’ to support the planning applications which have been submitted to South Oxfordshire District Council and Wokingham District Council this week.

Henley-on-Thames famous for the Royal Regatta is home to a beautiful historic bridge that dominates the main entrance to the town. Opened in 1786 the bridge has been the backdrop to millions of tourist photos and seen untold sporting success on the river.

The new bridge lighting will see it illuminated with discreet LED lights, creating a glittering spectacle for residents and visitors and a stunning backdrop for Henley’s summer of river events, while increasing visitor number and footfall for local businesses.

With the backing of Ian Hudspeth, Leader of Oxfordshire County Council and local MP John Howell, the Make Henley Shine campaign wants to send a powerful message to the two councils who control the bridge.

A petition started by the Henley Herald showing the town’s support, which already has 2,500 signatures, has now been officially launched to present to the two councils. Under the guidance of Henley artist and unofficial bridge keeper Clive Hemsley, and local business owner David Rodger Sharp the campaign wants to show that the residents of the town love seeing the spectacle of an illuminated bridge.

Clive Hemsley who has been working on this project for a number of years and will fund the project commented, “We are aware that every town competes for visitors and footfall, Henley is no different. We had temporary lights on the bridge for the last two years, and historically the bridge has been illuminated, now we want proper permanent LEDs but need planning permission from the two councils.

As a spectacular backdrop for the Royal Regatta, Henley Festival and the Traditional Boat Rally an illuminated bridge can add that extra ‘wow’ factor. We’ll have the 80th anniversary of the Dunkirk Little Ships at the Traditional Boat Rally this year and can light the bridge in red, white and blue for them or turn them blue for the Royal Regatta, even Pink for Leander Club! The LED technology of these lights will enable us to support every one of Henley’s fantastic events.”

David Rodger Sharp who has applied for the planning permission of behalf of the campaign said “Henley is a beautiful town and all the local businesses benefit from this LED feature on the bridge. We know when the temporary lights were up that thousands of extra visitors came to the town just for the light show. The LEDs are environmentally and eco friendly, it just makes common sense for people and businesses in the town to get behind the project.”

The campaign has planned the new LED lights in meticulous detail, with a lighting strategy based on that followed by the London River Project, seeking to enhance an appreciation of the character and significance of the bridge, to minimise visual clutter, reduce unwanted light spill and deliver striking, creative public art.

For the people of Henley signing the petition will help turn the lights on.

The petition can be signed at: